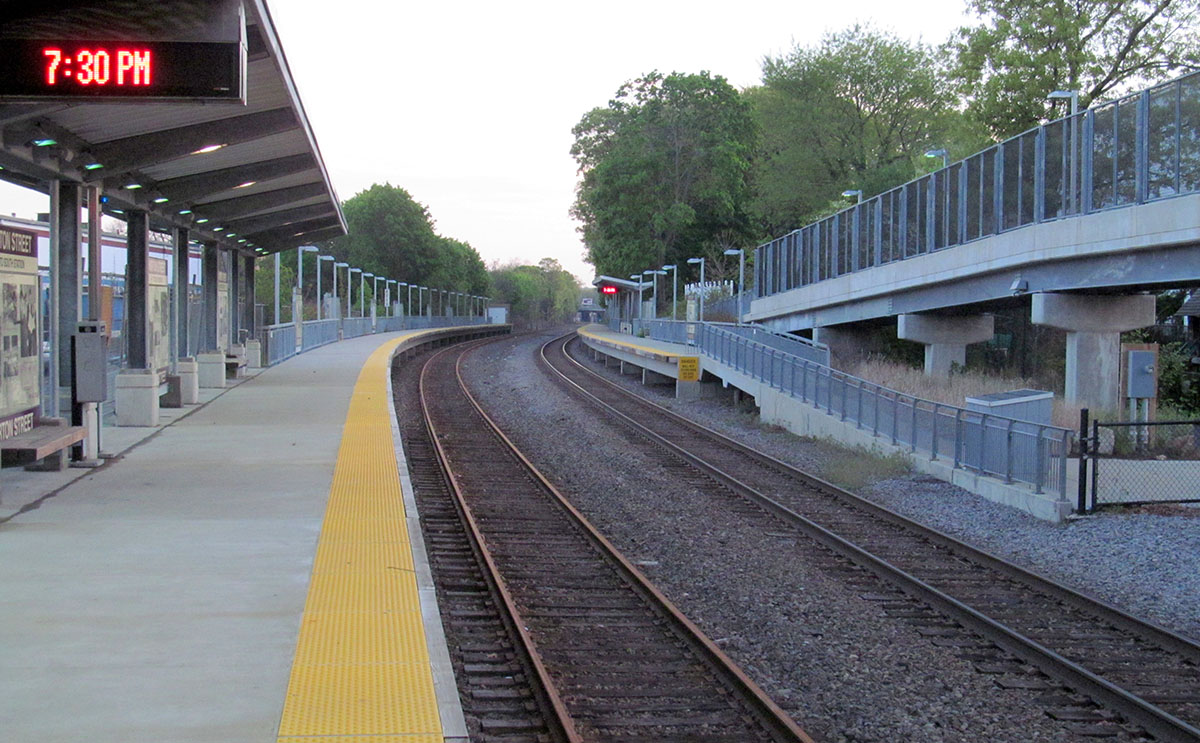 [alert type=”warning”]This post was submitted Greater City Providence reader Peter Brassard. If you’ve written something you’d like us to consider posting, please contact us and let us know.[/alert] [alert type=”info”]This is third of a series on ideas for Rhode Island’s transit future.[/alert]

Unfortunately, TF Green Airport and Wickford Junction Stations are still not doing well, only attracting about 400 passengers per day each partly because of marginal service.

The following diagram revises my commuter rail or shuttle train proposal from 2012. I reduced the stops from the 2012 plan and am proposing that all MBTA trains to and from Boston originate or terminate at Providence Station. 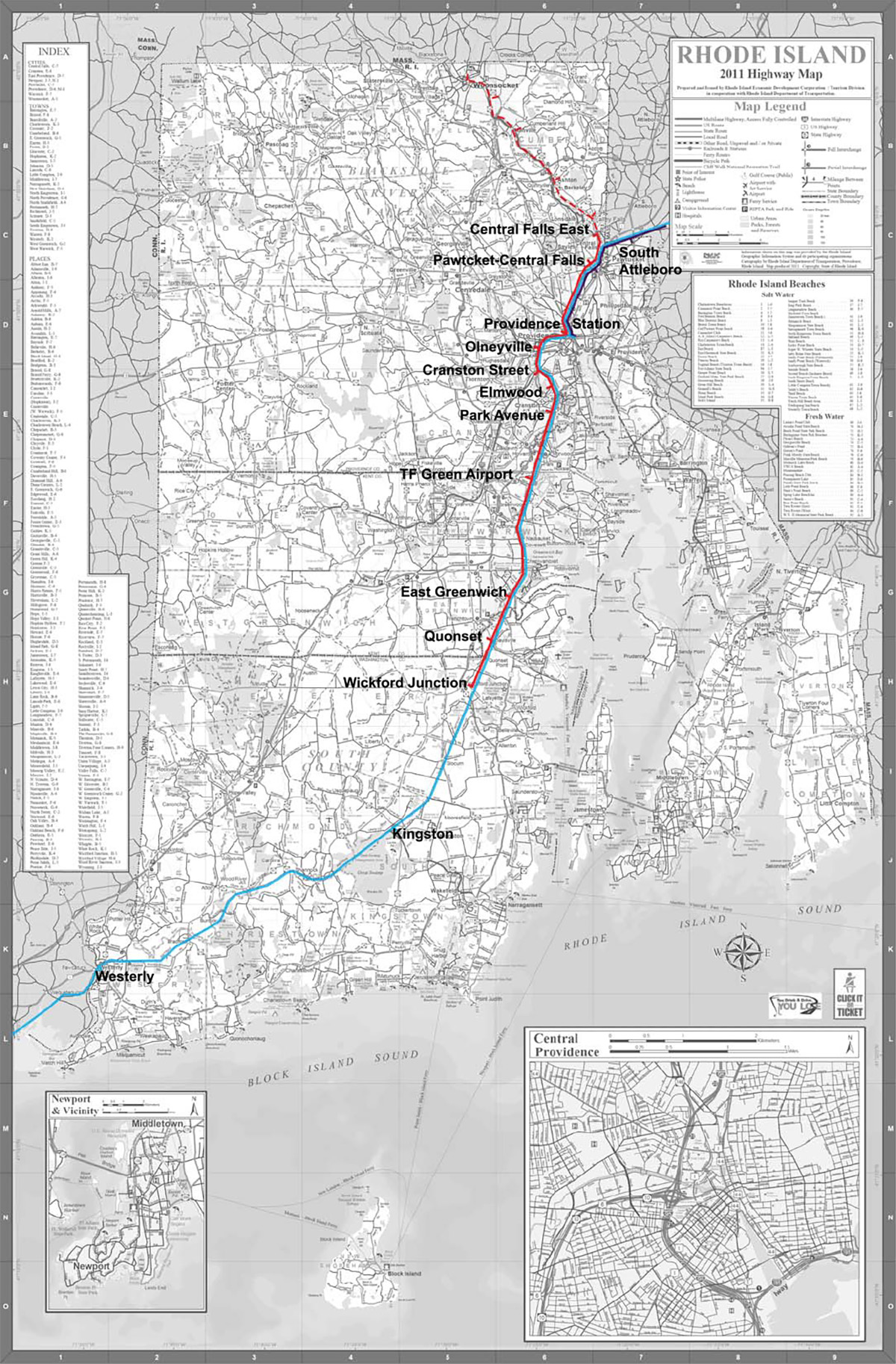 For this discussion, I’m calling the instate train RI-TRAIN, which could originate in Central Falls, or later Woonsocket, and terminate in Wickford. Regular frequent service is essential for successful transit.

Trains are fast. The time it takes to get from Dexter Street in Pawtucket to Providence Station by car is nine to ten minutes. With traffic it can be 15 or even 20 minutes. On RIPTA’s R-Line rapid bus it’s a 25-minute+ excursion. By train, it would take just six minutes. The same speed relationship applies along the Northeast Corridor (NEC) line within Providence’s urban core cities.

The NEC provides a strong instate transportation spine that intersect with major arterial streets that have bus service. If we want people to drive less, then transit service has to be energized and trains with station stops in walkable communities that have connecting bus routes is one way to accomplish that.

As I have advocated previously, adding train stations in high-density walkable urban areas is vital for increasing ridership and to create new or reinforce existing multiple commercial and residential hubs in the state. The larger Olneyville-Federal Hill-West End vicinity has about 28,000 people, who would be within less than a twelve minute walk or a five minute bus ride from an Olneyville train station, with a minimal 5% use that would be 1,400 passengers per day.

Other walkable places that also have bus service, which in effect extends their catchment area, are Elmwood-Reservoir Triangle with 16,000 people, Downtown East Greenwich-Cowesett-Potowomet with roughly 6,000 people and Cranston Street 14,000.

The proposed Cranston Station near Park Avenue would require parking, because like Wickford this area has excellent highway access and has less population density near the rail corridor.

The aerial photo with graphic overlay of Olneyville at Broadway and Harris Avenue suggests a station arrangement that would also work in other walkable urban neighborhoods. A RI-TRAIN would not require long double-decker trains for 1,400 passengers or 900-foot long platforms.

For initial RI-TRAIN service, a single DMU (Diesel Multiple Unit) train car, such as the 84-foot long Stadler Regio-Shuttle RS1 or something similar by another manufacturer that seats roughly 100 and with standees has a capacity around 180 people would be sufficient for starting service. Another possibility might be Battery Electric Multiple Units (BEMU), which are being tested in Japan currently.

The minimum starter platform would only need to be 200-feet long to accommodate up to a two-car DMU train. (Morton Street Station, Boston) When demand increases beyond a two-car train, platforms could be extended to 400-feet for three- or four-car trains. Sidings should be designed and built longer for future expansion(s) upfront.

The costs for small stations should be significantly less than Wickford or Warwick.

It has been suggested that when Rhode Island starts its own train between Wickford and Providence, the Pawtucket-Central Falls station would be considered an extension of rail service and would likely qualify for FTA (Federal Transit Administration) New Starts funding.

With the Woonsocket extension, new stations could be added incrementally, perhaps in conjunction with another infill station already along the route as extensions of the system to qualify for the federal funding? Example: if a Central Falls East station is built, could an infill station at Park Av Cranston be built as part of that expansion?

RI-TRAIN would connect multiple population and commercial centers and link them at a speed not available with other transit modes. For the RI-TRAIN or any transit system to succeed, besides providing regular frequent service, perceptions of transit need to be shifted. Marketing and providing incentives is critical to help people to make the transition to using mass transit.