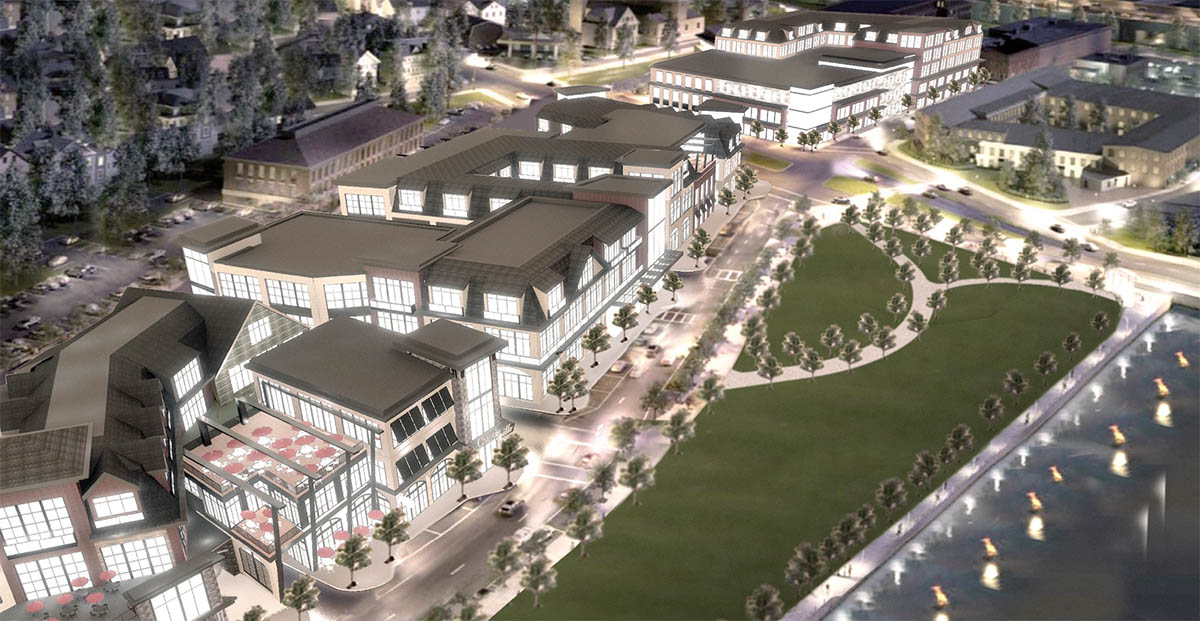 Rendering of The Row at College Hill

The Carpionato Group was scheduled to present a proposal for 195 District Parcels 2, 5, and 6 to the 195 Commission this evening dubbed “The Row at College Hill”, that meeting has been postponed.

There’s a lot to unpack in this large proposal. It covers 3 parcels on the east side of the Providence River between South Main and South Water Streets stretching from James Street at the northern end to Peck Street, one block south of Wickenden. 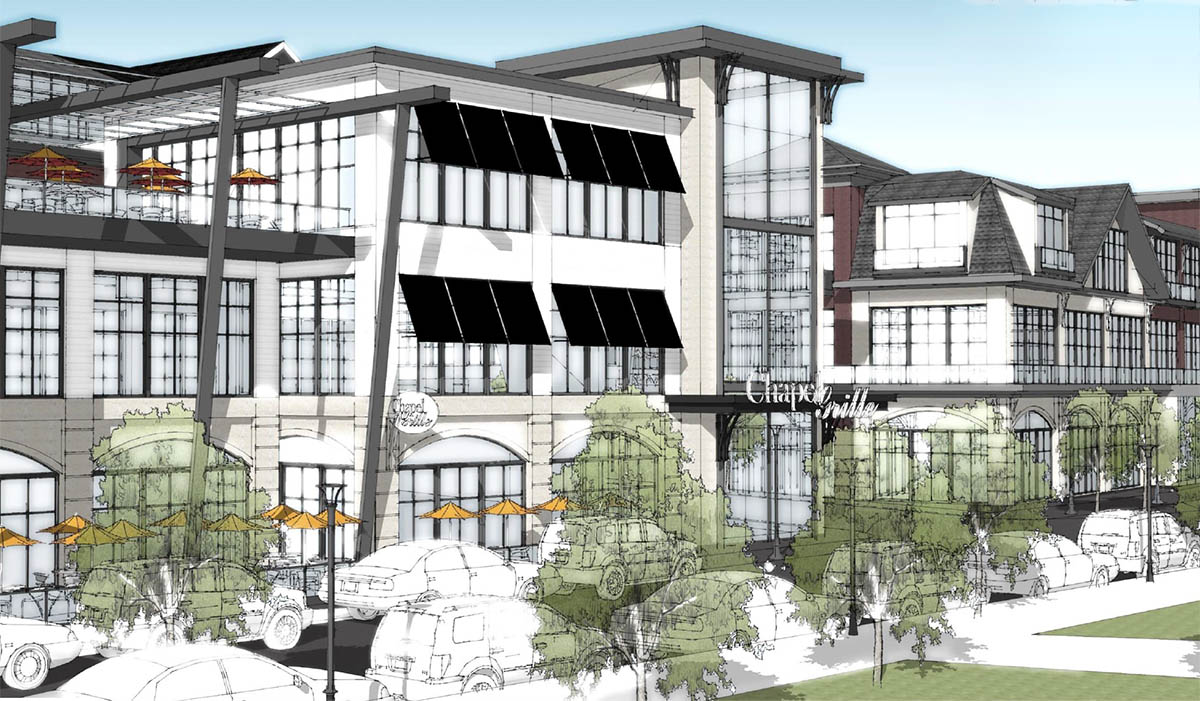 Seriously, I can’t take any of this seriously when they are proposing a 30,000 square foot restaurant. That has to be a misprint.

The rumor-mill has been whispering about a Target here, but I don’t see how there is enough room for that on any of the parcels or in the buildings as proposed. Maybe an urban concept Target? I’m not holding my breath. The plans do call out a “market” on Parcel 6 (and a lot of screened ground level parking). 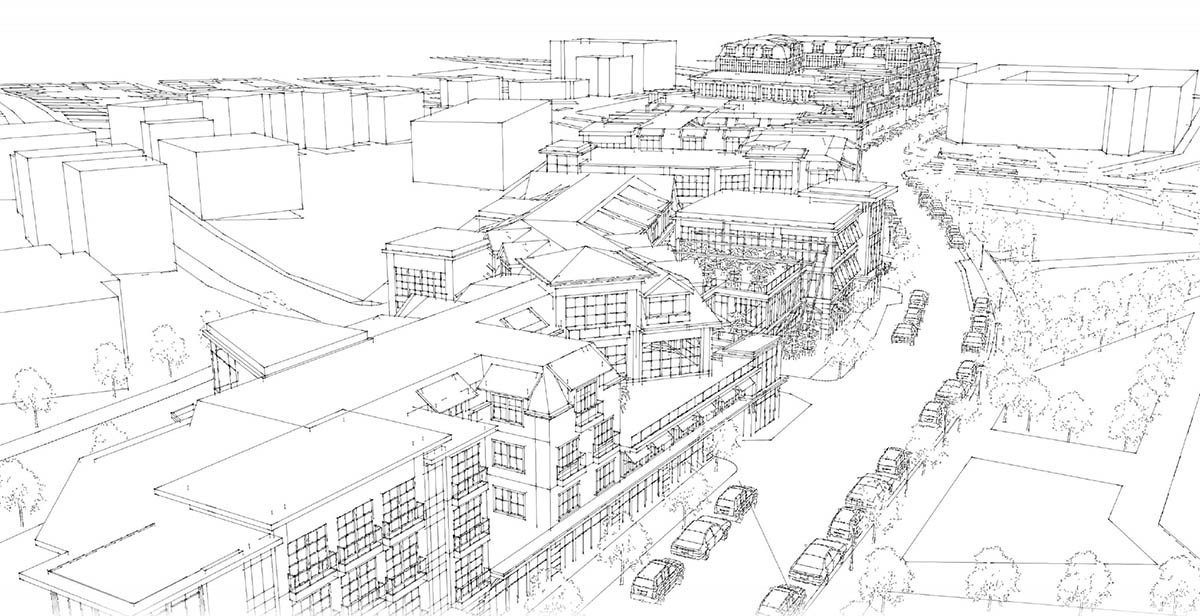 So, the thing with this is, Carpionato builds lifestyle centers, and although this is more urban-minded than what they get away with in the suburbs (everything is built to the street, there’s no surface parking…) it still reads as fake. Look at the plan above, it is trying to be in a vernacular of something like the Newport waterfront (which is in Newport, not Providence) so it has all these random materials and random angles, and random roof lines in an attempt to replicate the chaotic way neighborhoods like downtown Newport (or let’s be fair and assume they’re trying to replicate Fox Point) grew. But the randomness is so deliberate that it enters some weird uncanny valley of architecture.

Which leads to another issue with this, having this many parcels, this wide of a swathe of the urban fabric designed by one developer and one architect feels bad. While these buildings try too hard to look random and built over time, they actually aren’t random enough. Repeating the same handful of surface treatments over three long city blocks, actually ends up creating a sameness which is not a good thing. They just read as one long building with random crap tacked on to them. It would be better to design distinct individual buildings and stop trying to recreate something that never really existed anyway. Create a distinct hotel building, maybe that is red brick. Maybe the residential buildings are cementateous concrete siding, the office building could be more glassy, etc.

It isn’t just a slam against Carpionato (though, I really don’t like their architectural taste), having any developer or architect developing all these parcels is not a good idea. Especially as this proposal spans Wickenden Street at an area designated as a gateway area. The attention to design detail of buildings at this location has to be extremely high. I’m not seeing that here.

And what we’ve talked about here in the past about Carpionato is the ability to complete. They’ve proposed a similar project at this location in the past and the 195 Commission said no, they have a proposal for the Fruit and Produce Warehouse site that is going nowhere, Chapel View isn’t actually done yet… The 195 Commission should not allow them to purchase all of these parcels unless they can prove that they can get something done in one shot. Commission rules do not allow phased projects (though, Wexford is phased, so…). We cannot allow a developer to sit on parcels if there are others who might be able to get them developed.

One last thing, this project is not on College Hill, it is in Fox Point, if anything, it should be called ‘The Row at Fox Point.’