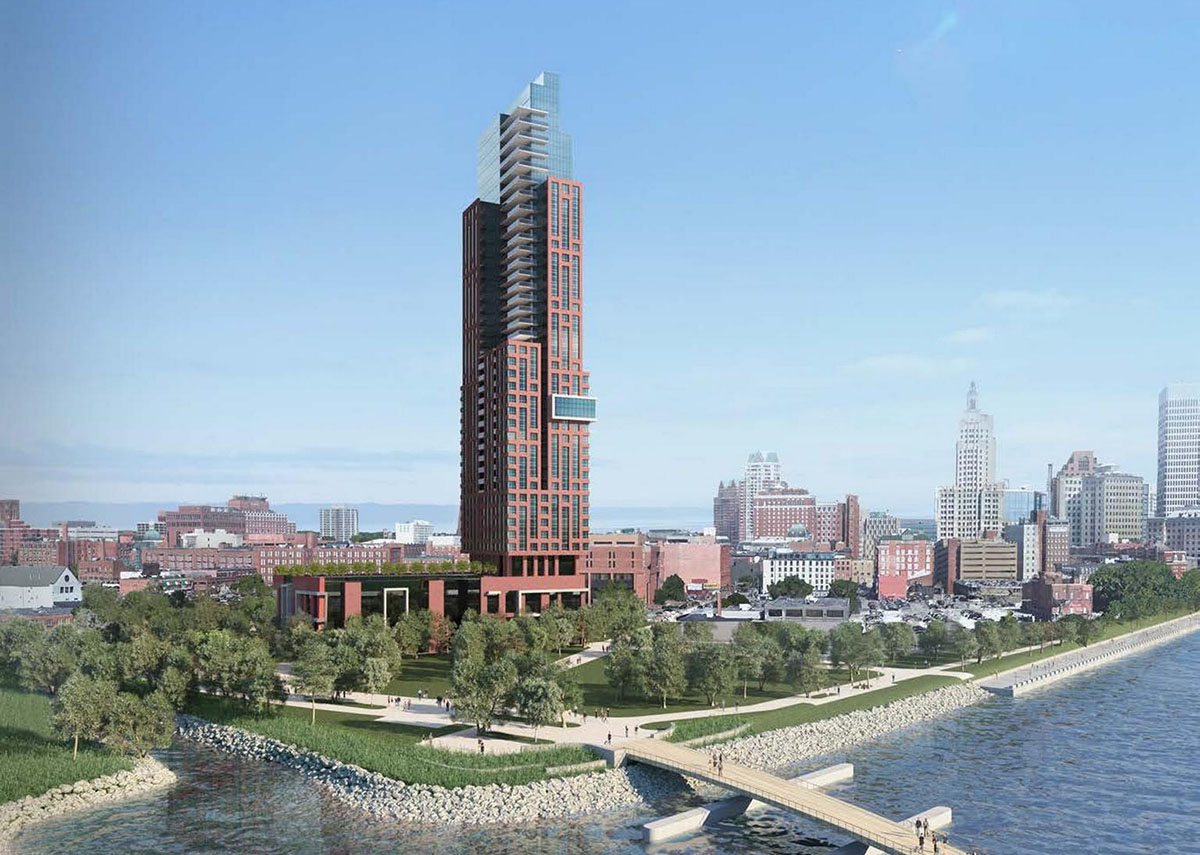 The City Plan Commission will review a proposal to rezone 195 Parcel 42 to allow for the construction of a residential tower, known as Hope Point Tower, by the Fane Organization of New York.

Parcel 42 is currently zoned for 100′ with bonuses allowing up to 130′. The proposed rezoning would allow for a building of up to 600′.

The City Plan Commission meets this afternoon at 4:45pm at the Providence Public Safety Complex on Washington Street.

The Providence Preservation Society has released the following statement on the proposal:

The Providence Preservation Society has grave concerns about this proposal which is to be sited on the northern portion of Parcel 42 (and part of P4 – a planned public park) in the I-195 Redevelopment District. This proposal is currently known as Hope Point Tower, but we believe it will decrease HOPE for Providence if our elected leaders allow it to be built on that location.

This proposal fails to meet existing development and design guidelines set forth by the City and the State. It is wrong for Providence.

This proposal, which has been proven to be financially unfeasible is diverting time and resources from the construction and redevelopment that Providence is currently experiencing. It is distracting from key issues of economic growth, job creation, affordable housing, and long-term environmental sustainability.

Why are we spending time on this when deserving and realistic projects can’t secure funding or attention they need? There are more than 60 projects awaiting historic tax credits, but the General Assembly doesn’t support that type of incentive.

We find that this application for a tower on Parcel 42 defies universal urban planning and preservation principles, namely:

It requires SPOT ZONING. The current maximum height is 130’, per the 2014 zoning ordinance. Spot zoning gives preferential treatment to an applicant seeking a use or form wholly at odds with a city’s zoning ordinance. It also sets a poor precedent and could open the floodgates to other projects in every neighborhood in Providence. If the City Council approves a change in zoning for this single parcel, they are prioritizing a single out-of-state developer over the agency and intent of the people of this city.

The SCALE is wrong. The Providence scale that has developed organically over the last three centuries, and which is one of the city’s best attributes, would be compromised and adversely affected. It will overwhelm the park and riverfront, public amenities we have invested in developing over the last several decades.

It does not benefit the life of the STREETSCAPE. The planned six-story parking podium, in this location, is detrimental to an active and enjoyable streetscape.

What is the PUBLIC BENEFIT associated with such SUBSIDY? The public is asked to give this developer tax incentives (ReBuild RI, Tax Stabilization, Sales Tax Abatement, etc.) yet beyond three years of construction jobs, what is the benefit TO the public?

We call on Mayor Elorza, the Providence City Council, Governor Raimondo and our elected leaders in the General Assembly to reject this proposal and to redirect your energies towards long-lasting job creation, appropriate new development, and redevelopment of cherished icons such as the Industrial Trust Building and the Cranston Street Armory, among others.

Among other items, the City Plan Commission will be reviewing plans by the Fane Organization to rezone 195 Parcel 42 to allow for a 600 foot building at their April 25th meeting.