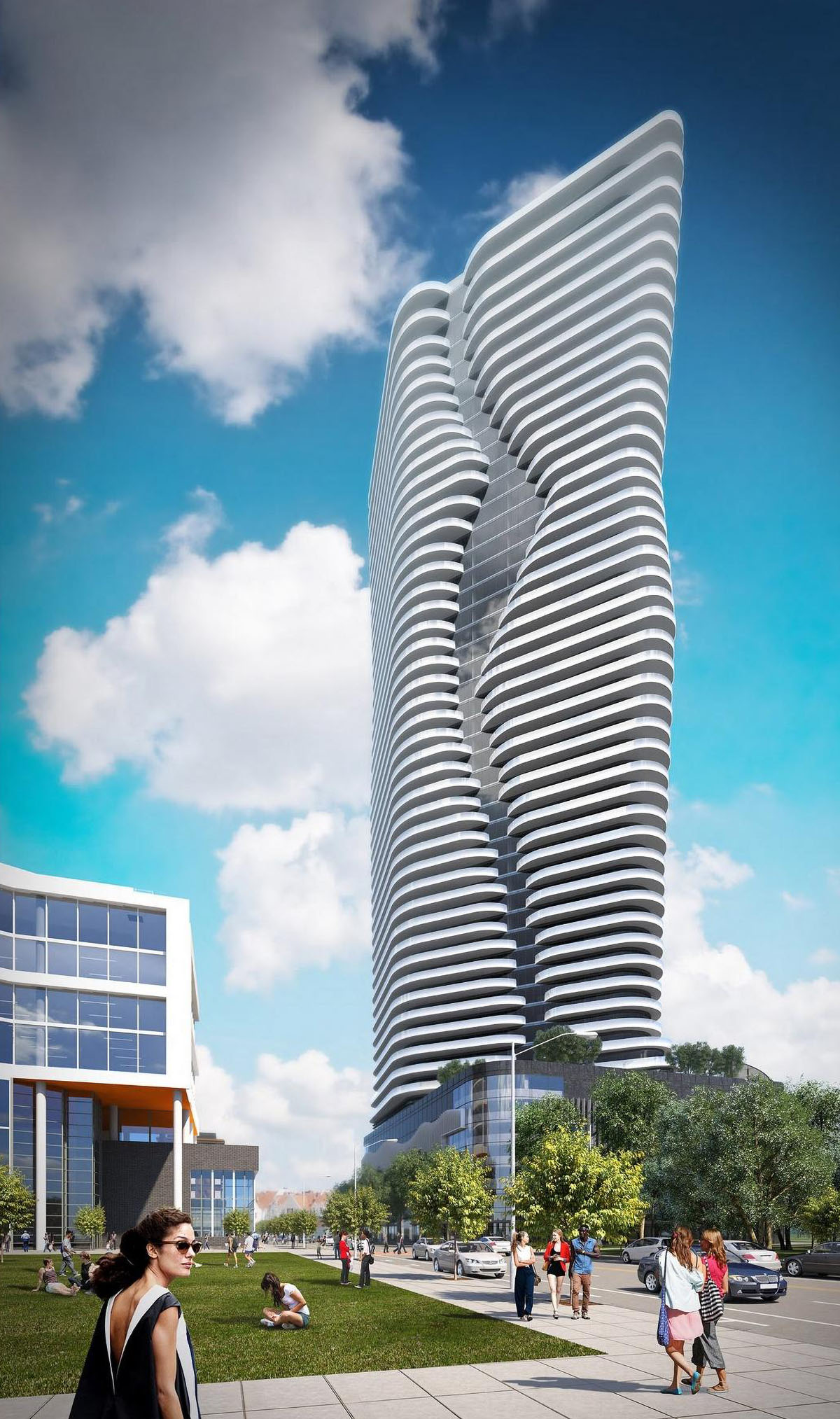 The City Plan Commission was reviewing rezoning Parcel 42 from a maximum 130′ height zone to a proposed 600′ height zone. According to the meeting posting, the Commission was also considering: changing the zoning ordinance so that the Downtown Design Review Committee may waive regulations relating to building height, massing, and required transition lines. Last night’s meeting was informational only, the Commission took no action on the proposal. The Commission will continue their review at their May 15th meeting, where they may decide to vote on the matter.

The new design for the building is similar in function, but a strong departure in form from previously released designs. The proposed building would be a 46-story (up to 600′) tall tower sitting on top of a 6-story podium with curved glass edges. The ground level of the podium would feature retail and lobby space, the remaining 5 levels of the podium would consist of structured parking. The other 40-floors of the building is proposed to be residential. 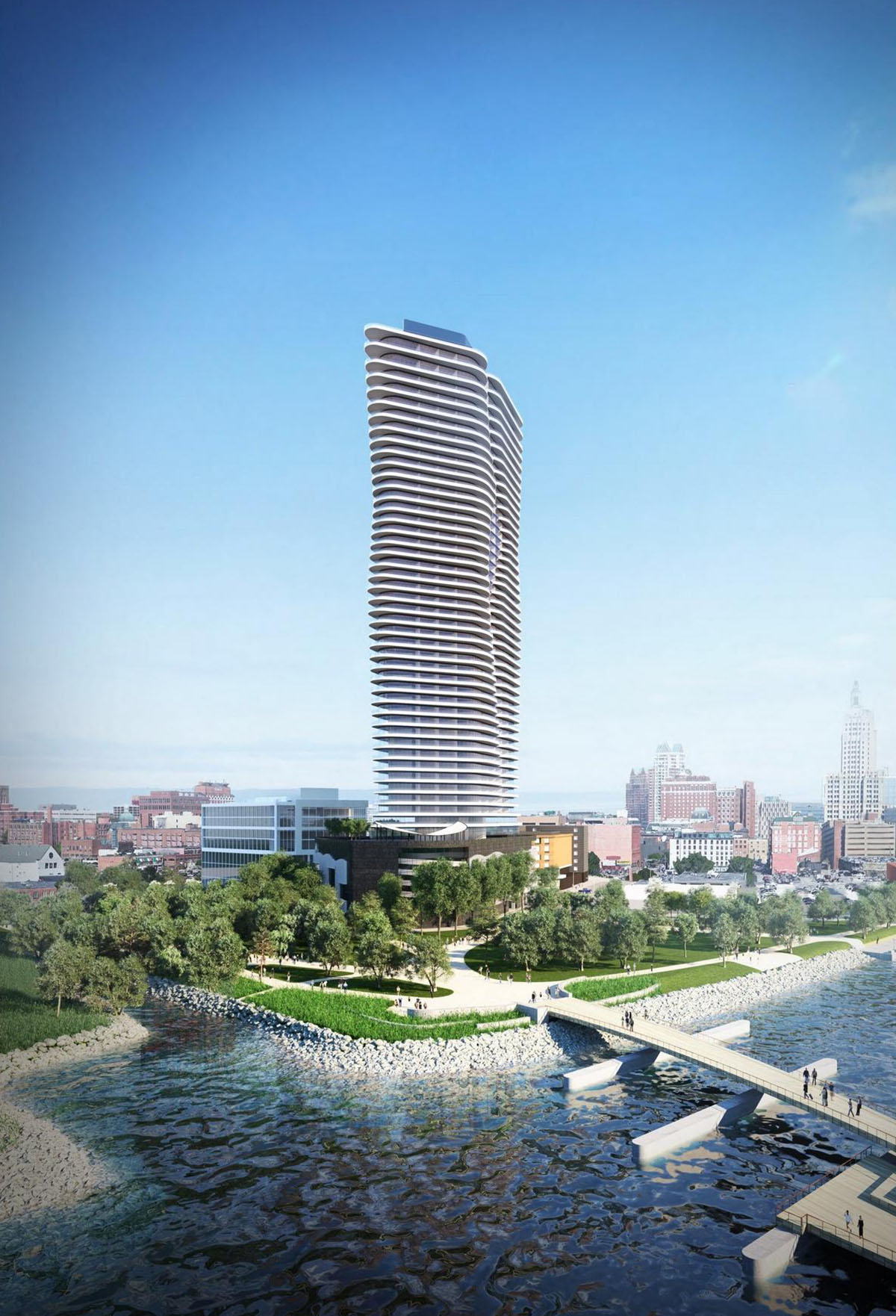 Rendering of proposed Hope Point Tower viewed looking across the Providence River from Fox Point. By IBI Group of Toronto

Providence Business News reports that developer Jason Fane said of the building, “It’s white-wavy. It’s sensuous. When people see it, they remember it, or it’s, wow, that’s nice, or I love it. I think it will become the symbol of Providence.” Fane also reportedly said this building would be the Eiffel Tower of Providence.

And there was this, reported by The Providence Journal:

Supporters included Al Sapienza, who played the fictional mayor of Providence, Frank Panzarella, on the former Showtime TV series “Brotherhood.” Sapienza lives in a Fane building in Toronto, and extolled its merits.

OK, so the fictional Mayor, who lives in Canada, likes it…

WPRI reports on community opposition to the project including from the Fox Point Neighborhood Association, the Jewelry District Association, and the Providence Preservation Society:

Brent Runyon, the preservation group’s executive director, said Fane’s vision “is wildly out of scale with the zoning that the citizens, including Providence Preservation Society and our members, helped create with the city.” He said such a tall structure would be a better fit downtown, near others such as the Superman and Textron buildings.

WPRI also reports the project’s cost estimates are already on the rise, with a ballpark cost estimate of between $250- and $300-million dollars. Mr. Fane also said he could not comment on the potential cost of rents and condos, telling WPRI’s Ted Nesi:

Asked whether he could say how much the townhouses and apartments in Hope Point Tower would cost to rent, Fane said, “Absolutely not.” He noted they would all be market-rate units. “I anticipate that all of the apartments will be affordable by somebody,” he said.

I call bullshit, pricing the units is a basic part of planning for any development. He either knows the anticipated prices, or if he does not have the prices yet, he’s not qualified to be developing such a project. He just doesn’t want to outline the potential rents and sales prices because detractors are already crying foul about public subsidies for luxury housing. Also, “affordable to somebody…” what a jerk thing to say.

There are of course supporters, chief among them the building trades. However, as commenter Joel points out on another post:

The design almost doesn’t matter. If someone wants to take this kind of risk, fine, but let them do it on their own dime. What’s most annoying to me is that people talk about the jobs this will create like the type of job is irrelevant. We currently have a skilled labor SHORTAGE, which drives cost of construction up. So basically the city/state would be changing the existing zoning and using our taxpayer dollars to make construction in the rest of the city/region even more expensive than it already is. And to build luxury housing when 42% of owners and 57% of renters in the city are already cost burdened as it is.

And I agree, the design is almost secondary. Personally, I like this one a little better than the previous one that had brick panels glued all over it. I’m all about seeing something with glass and modern lines built in Providence. Just not at this site and not something that hasn’t been fully financially vetted.

It should be pointed out every time we discuss this project, the developer does not own this parcel, yet. Sometimes we talk about things we wish were built somewhere else, but the developer only owns the land the developer owns and cannot go building their project elsewhere on someone elses property. In this case, the developer still needs to buy this land from the State. And the State has a lot of 195 land available. The 195 parcels nearest Route 95 are in a 200′ zone. They are also on a hill and not inundated by the water table, meaning the parking podium could go underground.

Or the developer could buy land from someone other than the State. The Old Public Safety Building Memorial Parking Lot™ is in a 300′ zone as is the lot across from the Superman Building where OneTen Westminster was proposed over a decade ago.

None of these alternate locations allow for 600′ buildings, they do allow for some height over their zoning based on bonus incentives. But the fact of the matter is a 600′ residential building is not really economically feasible in Providence anyway.

The City clarified the zoning in the 195 Land in a deliberate public process in 2012 (Full Disclosure: I was a member of the commission that studied the zoning and recommended it to the Mayor). To throw all that work away for a project that has not proven to be economically feasible, is already seeing costs rise, and demands public subsidies is a mistake. If the developer is serious about Providence and this project, he should open his books, pursue a suitable location, and engage in an honest dialogue with the community.