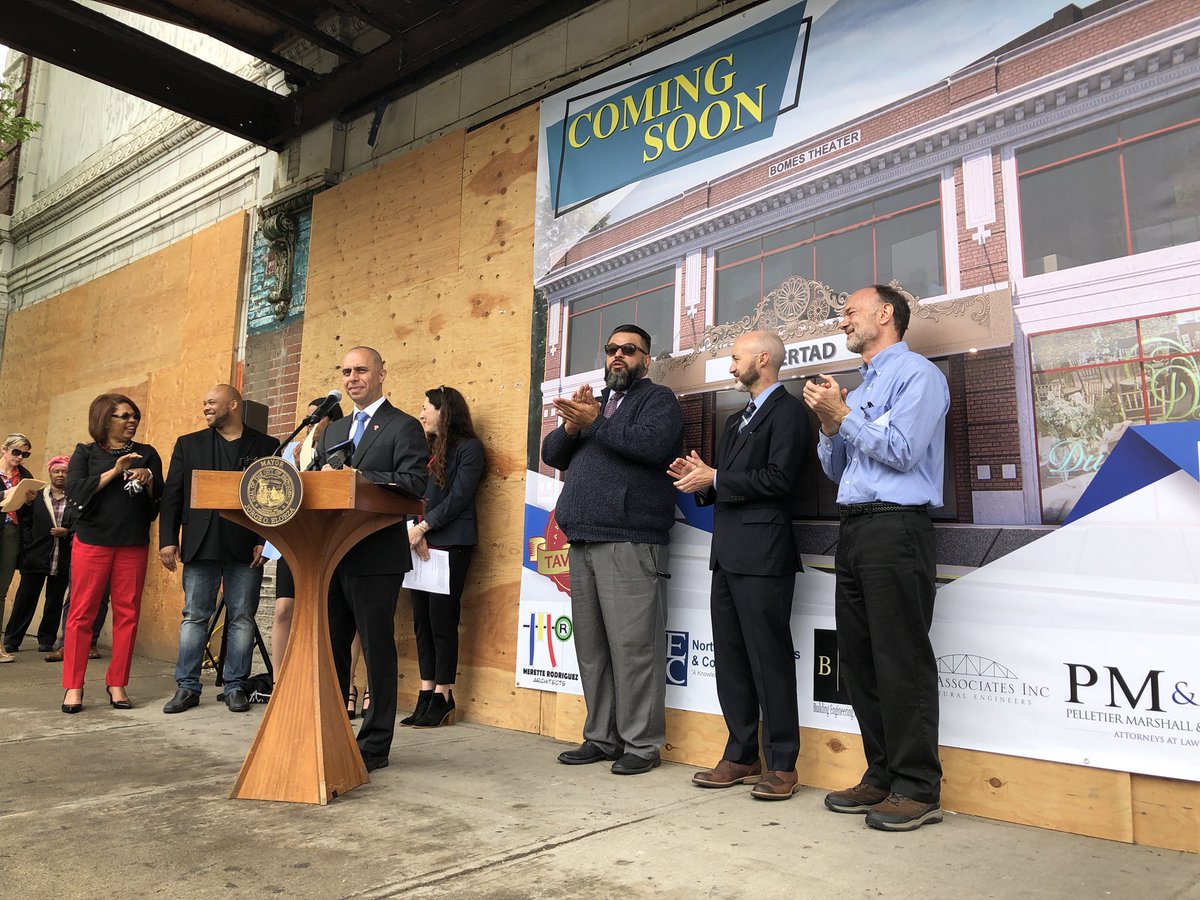 Mayor Jorge O. Elorza today joined Councilman Louis A. Aponte; Bonnie Nickerson, Director of the Department of Planning and Development;  Brent Runyon, Executive Director of the Providence Preservation Society and Clark Schoettle, Executive Director of the Providence Revolving Fund to announce the transfer of the historic 1921 Bomes Theatre located at 1017 Broad Street to local developer Fernando Tavares, who will oversee the complete renovation of the theatre into a mixed-use building, which will include retail, office, and reception facility space.

“I’m thrilled to see this historic and important building coming back to life,” said Mayor Jorge O. Elorza. “When we’re working together, we can make great progress and this is yet another example of that.”

The Bomes Theatre was acquired by the Providence Redevelopment Agency (PRA) in 2004 as part of the Ward 9 Redevelopment Plan. The PRA will transfer the property to Tavares, LLC in exchange for his investment of $2.2 million to complete the renovation of the theatre, which will include restoration of the original exterior, rehabilitation of the theatre space into a reception facility and the creation of two new retail units and commercial office space on the second floor.

“One of the great things about America is our love of a comeback,” stated City Council President David A. Salvatore. “The Bomes Theatre began as a movie house that served as an escape from the ravages of WWI and then later the Great Depression. Over the past 97 years, the theatre has seen many lives, and I’m excited to see what this comeback will look like.”

“In 2004, Councilman Miguel Luna and I helped to lead the effort to acquire the Bomes theater as part of an effort to preserve it and find an appropriate reuse for it, it was and is one of the last buildings of its vintage on Broad Street,” said Councilman Luis A. Aponte. ”It’s taken a while and as a community, we’ve had to fend off efforts to take the building down from many who didn’t believe this day would come. The restoration and reuse of the Bomes has been long in coming but well worth the wait. I’m sure Councilman Luna would be happy with how this has turned out.”

The PRA has recently worked to prepare the building for reuse by completely clearing out debris inside the building, conducting a comprehensive structural analysis of the building and enlisting a group of graduate students from Harvard University to assist in analyzing the options for the best utilization of the building and assisting in marketing the site.

“The City is to be commended for its work to preserve this landmark theater,” said Brent Runyon. “Adaptive reuse of buildings like this is not always feasible. But by securing it and continuing to work with prospective developers, they gave it the time needed for a new, sustainable use to develop. We particularly want to commend Jason Martin and Bonnie Nickerson in the planning department for their advocacy and care of Bomes.”

The Bomes Theatre had been a frequent fixture of the Providence Preservation Society’s Most Endangered Properties list and was featured in the list in 2009, 2011, 2014, 2016 and 2017.

“After 10 years of hope and despair, we are so excited that Fernando Tavares is doing this project,” said Clark Schoettle. “He has the energy and skill to accomplish the renovation and reuse of this important historic resource and the Providence Revolving Fund stands ready to help him with loans and assistance if he needs us. The City should be commended on its early intervention to acquire and protect the building and prevent it from demolition. If you leave a historic building standing long enough somebody will come to its rescue. Fortunately, Fernando is our man.”

Last year, the PRA worked with Northeast Engineers and Consultants to investigate the condition of the building and analyze different options and associated construction costs for the rehabilitation of the theatre.

“I’m delighted that the Bomes Theater will soon be rehabilitated to be an active use that will be part of the dynamic street life and vibrancy of Broad Street,” said Nickerson. “The persistence and dedication of all of the partners gathered today is what it takes to bring historic gems like Bomes Theater back to life. It’s a great preservation success story!”

Work is expected to be completed by the end of 2018.

[alert type=”muted” heading=”About the Bomes Theatre:”]The two-story, Beaux Arts, flat-roof, brick theater was constructed in 1921 on a lot that stood vacant in 1919 when it was purchased by Samuel Bomes. The building was one of the Bomes chain and is typical of small neighborhood theaters built after WWI, when silent picture became a popular form of family entertainment (South Providence, RlHPHC, 1978; Woodward 1986). The building was also known as the Liberty Theater when it was under the management of the Elmwood Amusement Corporation. The 1950 directory lists Liberty Theater at this address. The 1983 Sanborn map notes that the theater had a capacity of 865 persons. Following its use as a theater, the building was occupied by Jason’s Furniture.[/alert]

The City Plan Commission reviews plans for a food hub in Valley, RISD's Institutional Master Plan, rezoning for the Bomes Theatre, and more at their May 23rd meeting.

The Providence Preservation Society announced thier annual list of the city’s Most Endangered Properties this week.

The Providence Preservation Society has announced their 10 Most Endangered Properties list for 2016.