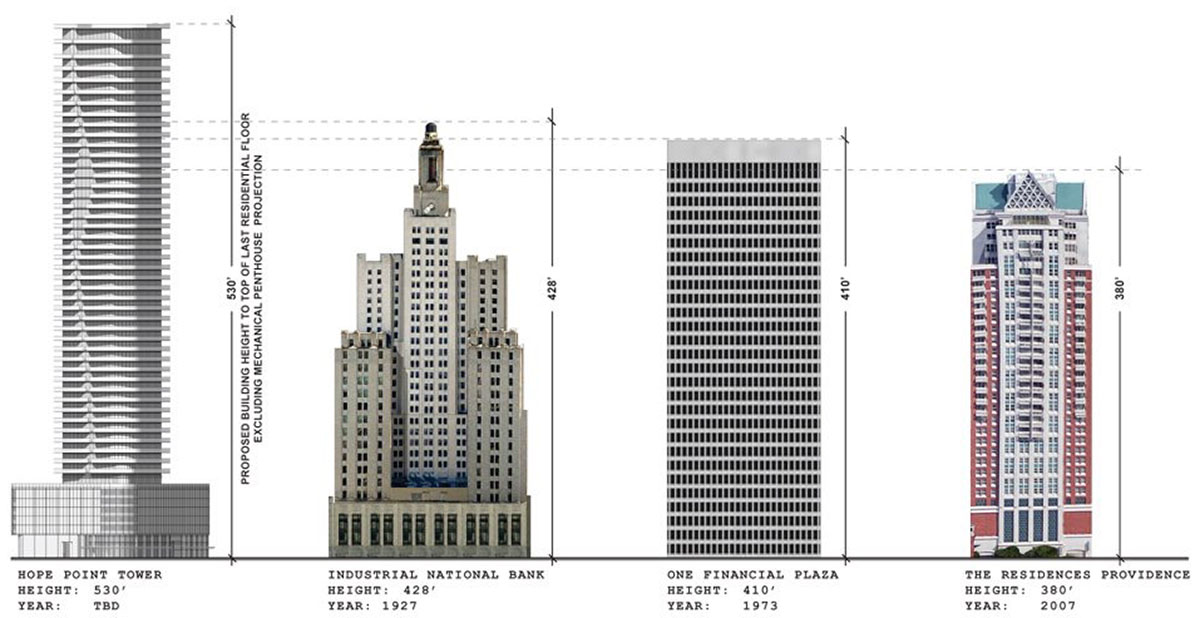 Illustration so height of proposed Hope Point Tower and the 3 current tallest buildings in Providence.

Below is a look at the various local news reports about the City Council hearing this week regarding the zoning change requested by The Fane Organization for the proposed Hope Point Tower:

“You have four good planning reasons to approve the tower,” he said.

But many residents who testified said the project, known as the Hope Point Tower, doesn’t fit with the rest of the city, ignores the city’s dire need for affordable housing in favor of luxury condominiums, and goes against a comprehensive zoning plan approved by the City Council three years ago.

“The zoning laws are a way for you to communicate to developers what you want to build,” said Olin Thompson, a Providence resident who testified Monday night. “What happens here, now, today, is an issue of respect. The one who does not respect our zoning laws is Mr. Fane.”

Without specifying rents, or purchase prices for the condos, he said his plan would allow a range of working people to afford the units. The apartments will become larger and more luxurious as they move upward, starting at the seventh floor, which he said will allow the occupants to look over either the Providence River or the Wexford Science & Technology complex, now under construction.

Built in three design sections, the various stories would be accessible by different lobbies and elevators, he said. According to the building architect, the occupants would include empty nesters, moving into the city, investors and even students who could double up in units that were purchased as an investment.

For the first time since the plan was introduced, developer Jason Fane addressed the Providence City Council about his proposed “Hope Point Tower” that would drastically change the city’s skyline.

In Providence, the zoning ordinance only allows building heights of 130 feet in the area of the city where the tower would be built. This means the city council would need to approve a zoning change before the $300 million project could proceed.

The City Council Ordinance Committee heard testimony back in September, both for and against the project, before making a recommendation to deny the zoning change. The full council sent it back to the committee until Fane and his associates could pitch the project to the city council themselves.

Architecture Here & There: A little off the top for Fane

The fact remains that if the council approves this major zoning change, it will effectively nullify all zoning regulations in the city. At stake is not a tweak to squeeze an otherwise legal building under the wire. This would not be to bend but to discard the rules. It would be a declaration by a developer that he doesn’t care about the law – and equally, by any council member who votes to approve this profanity, a declaration of the same.

Unlike the first hearing held by the council’s Ordinance Committee in July, this time the committee did not vote to reject (as it did then) or recommend the zoning change. So far as I am aware, no date for a vote by ordinance has been set, much less a vote by the full council. It’s no wonder members aren’t eager to vote on this.

At a second Providence City Council Ordinance Committee meeting to discuss the Fane Organization‘s proposed Hope Point Tower, dozens of people testified both for and against the project. Those opposed were mostly Providence residents from neighborhood groups that see Fane’s design and the placement of the proposed building on the I-195 land instead of a more appropriate downtown location. Those in favor were mostly members of the Building Trades, or paid employees of the Fane Organization.

The post includes video of most (all?) of the testimony at the hearing, including The Fane Organization’s 70 minutes of testimony.