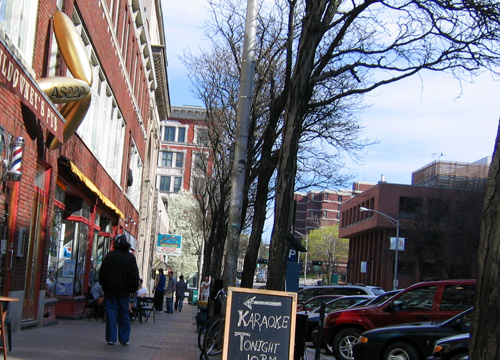 OMG y’all! Did you hear about the dust up between AS220 and Taqueria Pacifica? No? You been under a rock or something?

I first saw one of my friends post about it on Faceplace, then it showed up on Daily Dose and UrbanPlanet. Apparently there is a huge heated thread about it on Lots of Noise. I’m a little late in the game posting about this obviously, I was kind of waiting to see if I would hear more info, but everyone else is running with it, so I want to be cool too!

Someone on UrbanPlanet going by the name of gopher.maps was kind enough to transpose this from Lots of Noise:

Tyler (owner of Taqueria Pacifica):
here it is, the official story of just what is going on with the taqueria. Zander and bert filed eviction papers to evict taqueria pacifica and all it’s employees on the 18th. the rent was due by the 15th, but instead of just picking it up like they usually do — we share an address — they waited for us to slip and nailed us. it’s all up to the courts but the bottom line is they are railroading small business because we don’t go along with their agenda — whatever the heck that is. this was made apparently obvious when zander refused rent yesterday. they just want us gone. too subversive, i guess. those rebellious burritos. whatever. the tp will most likely rear it’s head again, either here or not. but thank you to everyone who has eaten our food and supported us. tenants of theirs should beware. you could be next. — more later. aloha–

Xander (manager of AS220):
Hi all-
Firstly, I’d like you all to know that I respect the discussion that is happening in this forum. I fully recognize that AS220 and the Taqueria are part of all of our shared community, and that this situation affects many people in it. Your desire for more information, as well as your investment in this process, is valid.

Of course, there is another side I could add to Tyler’s assessment of the situation. However, I don’t think its in anyone’s best interest to get into a flame war on LON. We are maintaining a civil conversation outside of the limelight as this situation progresses. Until the next steps are firmed up either through negotiations or through a court agreement, I can only offer the following:

It was mutually agreed that the relationship between AS220 and the Taqueria was not working. This was addressed with good faith by both sides. It became clear that both sides felt they had expressed a desire to renegotiate, reconcile, or end the relationship in the past, but somehow these desires were never totally clear to one another. They violated the terms of their lease, opening up an opportunity for us to bring the situation out of the standstill that it had been in. In terms of refusing their rent yesterday, that was a matter of protocol and was on instructions from our lawyer. We have told them that we are willing to negotiate to make the transition work for them and their employees, who are certainly not being disregarded or thought of lightly through this process, and AS220 has every intention of returning their security deposit.

We have no intention of expanding the bar. There will be some kind of food offering available, however, there are no specific plans for this at this time…We’re working on it though! (I have to admit to laughing aloud at all of the things that Reposludegoblin had read about going into the space on the daily dose – none of them are true)

I totally understand that this action has an effect on many people and on many aspects of this community, and that there will be a variety of responses and complicated feelings about the issue. I appreciate that many of you want to have a better understanding of the situation before making judgments, and appreciate your understanding that the situation is more complicated than a single blog thread can make clear.

*NOTE: I have no reason to believe these two people aren’t who they say they are, but it is the internet, so keep that in mind.*

So there you have it, he said, he she said. Doesn’t get any clearer than that does it?

To be honest for a second, and please don’t hit me, I’ve never really been a Taqueria fan. Not having enough information here to take sides, I’m not going to, but I wouldn’t be too broken up if AS220 brought someone else into that space. At the same time, it sucks for the Taqueria peeps to be out on their ear all of a sudden, especially the employees, who presumably are just along for the ride and are suffering because the people in charge seemingly can’t get along.

If the Taqueria still has their truck, or can get a truck, I wonder if a place could be made for them in the Kennedy Plaza area. The Plaza needs more food vendors, the Taqueria needs a new home… see something happening here..?

Photo (cc) stu_spivack I’ve been watching the slow emergence of Food Truck culture in Providence and have mostly been happy about it. The Food Trucks popping up thus far have good food, they bring a certain cachet...

Rendering from Envelope Architecture + Design As we start to look towards redeveloping 19 acres of land in the center of our city, during the worst economic downturn in a generation, it is apparent that we need to start...

This is a little project I heard was coming, then forgot about, then walked right into yesterday and remembered. This is the small park that sits basically half a story above Empire Street at the intersection with...