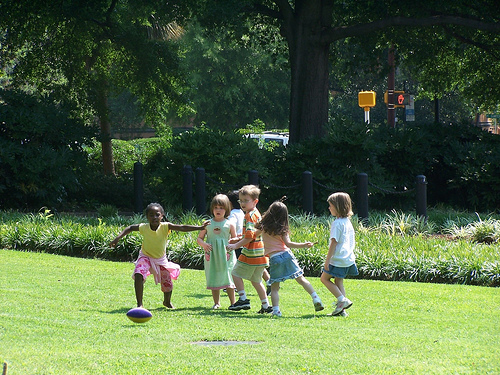 Documentary and Discussion Ask
‘Where Do the Children Play?’

KINGSTON, RI – A provocative documentary film, “Where Do the Children Play?,” will be shown at a free public screening on Tuesday, March 30 from 7:00-9:00pm at the University of Rhode Island’s new Center for Biotechnology and Life Sciences (Flagg Road, Kingston, RI 02881). The film examines an issue of growing concern among pediatricians, mental health experts, educators and environmentalists: more and more children are growing up today with few opportunities for unstructured play, especially outdoors.

“Where Do the Children Play?” grew out of Elizabeth Goodenough’s work on “secret spaces of childhood” at the University of Michigan. The film was written and directed by Christopher Cook and produced by Michigan Television. “Children need free time every day to discover their own abilities, desires, and limitations,” said Goodenough, who also edited the film’s companion volume, A Place for Play. “Open-ended exploration and play in woods, fields, vacant lots, or other semi-wild spaces enhances curiosity and confidence throughout life.”

A marked decline in children’s spontaneous, unstructured and creative play is a key factor in their increasing stress levels and mental health problems, according to a 2007 clinical report from the American Academy of Pediatrics (AAP). Causes of the demise of include parental fears of “stranger danger” and the explosion of electronic entertainment in the lives of today’s children. These and other issues are explored in the film.

The lead author of the AAP report, Dr. Kenneth Ginsburg of the Children’s Hospital of Philadelphia, appears in the documentary, along with Richard Louv, author of Last Child in the Woods, British “playworker” Penny Wilson, and other experts in child development, psychology and urban planning.

Most striking, however, are the scenes of children themselves engaged in the rapt state of self-directed play and then describing the importance of time and space for free play in their increasingly hectic lives.

The event is presented by Providence Children’s Museum, University of Rhode Island’s Department of Human Development and Family Studies, and the URI Child Development Center, with assistance from Michigan Television.

Documentary Screenings “Where Do the Children Play”

Play at the Park with Providence Children’s Museum!

The Providence Children’s Film Festival was founded in 2009 to bring high quality, independent and international children’s films, animation, and documentaries to Rhode Island, and to present them as shared...