By now we all know we have a problem on Atwells Avenue.

Infrastructure is unfortunately expensive, however, the enforcers cannot be everywhere all the time so let’s look at what infrastructure can do.

The incidents have generally been taking place at the western end of the street. This is the end where the pedestrian activity and activity in general starts to diminish. It is also where the street gets wider and darker. Though the city speed limit is 25mph, as we’ve discussed before, traffic generally moves as fast as it can, and the western end of Atwells is engineered for faster moving traffic.

When we look at this area we see that the street is wide, flat, and runs downhill. Combine that with less activity on the sidewalks and poor lighting and we have traffic moving too fast.

While the city speed limit is indeed 25mph, cities around the world have been joining the 20’s plenty movement. Atwells is a densely packed residential area and one of the city’s most visited retail districts. 20mph should be the functional speed limit of the street.

The first infrastructure intervention that could be implemented to reduce speeds is to reduce the lane width. See this image below of Atwells and Wickenden Streets at the same ratio. 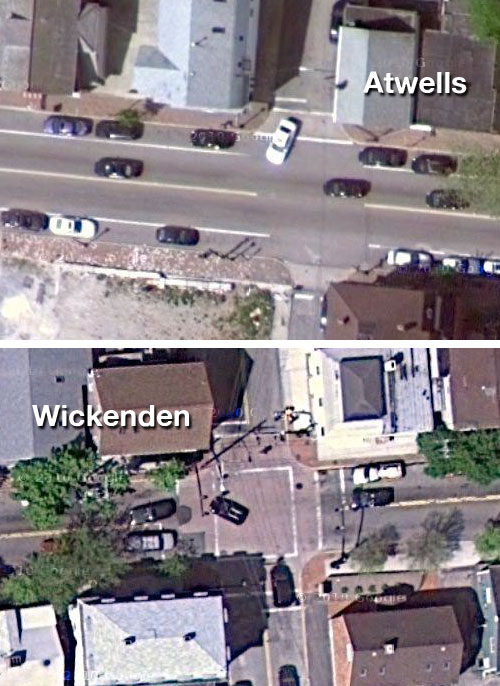 Anyone who has ever driven on both streets knows that Wickenden is much more narrow and that that forces you to drive slower. You can see in the image that three of Wickenden’s lanes would fit into Atwells two. Space taken away from the roadway can be transferred to the sidewalks, giving more space for pedestrians to pass by Atwells’ ubiquitous outdoor dining tables. Narrowing the street provides a benefit to the restauranteurs.

Another infrastructural intervention that can help to slow traffic and also give an advantage to pedestrians is the pedestrian refuge or pedestrian island.

It is also often used when no light exists, and pedestrians need safe harbor after managing one direction of traffic, before taking on the next. This significantly improves the amenity for pedestrians trying to cross busy streets, as they are much more likely to find two small gaps in traffic rather than one situation in which gaps for both directions coincide. Since this reduces their average waiting time, it also improves safety – with impatient pedestrians less likely to use gaps that turn out to be too short for safe crossing. The refuge need not be large or landscaped. Simply a small area of raised curb with signage making it clear to drivers. It is an obstruction in the road that drivers need to be alert to, forcing them to pay attention, and has the added benefit of allowing pedestrians to cross half the street then wait. Which moves them across often much quicker and much more safely.

Raised crosswalks are another way to calm traffic and give better visibility to pedestrians. Personally, I think raised crosswalks should be used sparingly. They tend to slow traffic down too much, almost to a stop, which tends to piss some drivers off, making them act out by speeding between them. Not the outcome we’re seeking.

Curb extensions should be used at key intersections to reduce the width of the street that pedestrians have to cross and to physically prohibit vehicles from parking in crosswalks.

Let’s look at some places where physical interventions could be placed on the Avenue, starting at Acorn Street: 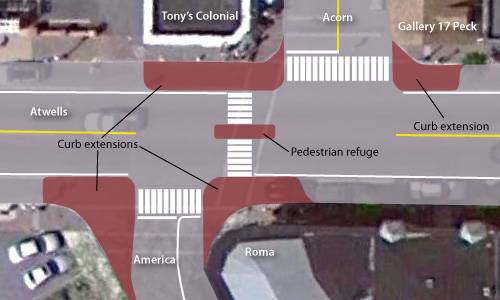 At Acorn and America we start with curb extensions bringing the sidewalks out and narrowing Atwells. First note, we lose no on-street parking here as there is no parking allowed within 20 feet of the corner, this physical intervention ensures that cars cannot park too close to the corner eliminating the need to enforce this through police action. In fact, the western corner of America is pushed east actually creating new parking where it was prohibited before by the wide mouth of America Street.

The pedestrian refuge also prevents traffic coming from America heading to Acorn to cut the intersection. Traffic currently making this maneuver often cuts across diagonally, creating traffic flow from an odd direction that pedestrians are not expecting, endangering the pedestrian.

Finally, the extensions give more room on the sidewalks for retailers. In this scheme Tony’s Colonial could easily place tables or retail bins on the sidewalk with plenty of room for pedestrians, wheelchairs, strollers, et. al. to pass-by.

Ideally these changes would be done up right, with new granite curbs placed, new decorative sidewalks installed, lighting, what have you. Of course that would be pricy, but this intervention can be achieved on the cheap. New York, San Francisco, and other cities have been extending sidewalks with temporary plastic or concrete curbing and such placed right up against the existing curb like so: You can see here there is a channel to address drainage issues (that will be covered with a grate when complete).

Sidewalk extensions can even be achieved simply with paint on the roadway and planters and bollards as the physical barrier.

Similar treatments can continue westward down the Avenue at Sutton, Vinton, Piedmont, and Marcello. Treatments can vary or be phased in as funds come available. Raised crosswalks could slow traffic enough in some areas, full curb extensions and pedestrian refuges in others.

Among people seeking solutions for this problem, traffic lights do come up. I think they are not the answer in all cases. One big problem, is it sets up a situation where divers are looking to one place for their cue, the light. If the light is green, foot hits accelerator. Removing traffic controls forces drivers to pay attention to everything, making more alert and safer drivers. One place where I think a light might be prudent is at Knight Street.

Having a light at Knight will be a sign from far down the Avenue that there is another place where drivers might have to stop. Currently, once past Walgreens, the traffic and activity dies down on the Avenue and drivers speed up knowing there is nothing to stop them until Eagle Square. There is also a lot of traffic trying to come out of Knight, or turn off Atwells onto Knight, making a very congested intersection. Drivers gunning for a break in traffic to make their move pay little heed to pedestrians. A light will force drivers to stop, create actual breaks for drivers to get into the street, and allow for the creation of pedestrian only light cycles. A light at Knight should include interventions such as curb extensions: 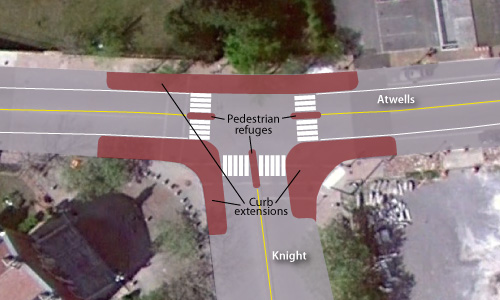 You can see how much area was given to cars, which they don’t actually need in the red. The intersection is reduced from suburban highway to urban street dimensions. Room is given to pedestrians, the area pedestrians have to cross is reduced, and drivers are given physical cues, through the size and shape of the roadway, that this is a mixed area, they must slow down and pay attention.

Of course the newly redesigned Atwells & Dean intersection is another place where physical interventions are needed to increase pedestrian safety, but that is likely a thousand word rant for another day.

State Senator Jabour is hosting a meeting (could someone have a meeting that is not when everyone who lives up here is trying to be at work please?) with RIDOT and the Federal Hill Commerce Association on Tuesday morning to discuss the Avenue. While I’m happy to see the Senator taking action”¦ RIDOT? Sigh. I’m sorry, but they created this mess to begin with, and as much as I hope to see a change in attitude from that agency, recent actions do not leave me hopeful that they can design a road that is safe for pedestrians.

We need to fix this. We can’t have pedestrians continue to be maimed and killed in on one of the city’s top tourist destinations. We have to do it right though.

Curb extensions being installed on Atwells

Atwells Avenue at Sutton Street. It has been nearly three years since City Councilman Terry Hassett was struck and severely injured by a hit and run driver on Atwells Avenue; one in a long line of pedestrian injuries...

Atwells Avenue is closed at Dean Street due to a gas leak. Dean Street appears to still be open to through traffic, but no traffic is being allowed from Dean onto Atwells.