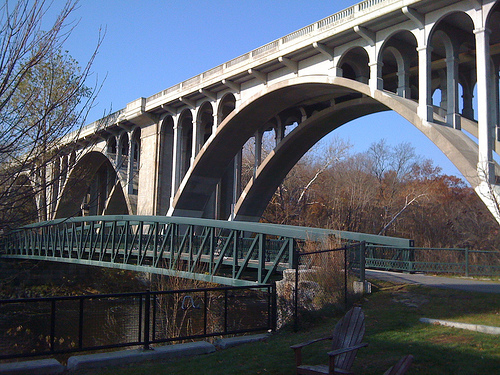 The following is by Robert Billington, Ed.D, President of the Blackstone Valley Tourism Council.

Let’s face it; Rhode Island’s bikeways bring lots of enjoyment to our residents. From South County to the Blackstone Valley, these paths connect our neighborhoods, improve our economy and draw visitors to explore our communities. They are safe, enjoyable and provide a stress-free place to relax and exercise. Everyone who experiences them wants to see not only more paths but improved connectivity between paths. We have the opportunity to do this.

While there are other bike paths in the state, what makes the Blackstone River bikeway special is the industrious American story it tells. Over 30 years ago, planning began on the Blackstone River bikeway — a bold idea for its time. Restoring dirty land along the oldest polluted river in the hemisphere, the river that launched America to super-power status, took great imagination, and guts. Ten years ago, the first few miles of the bikeway opened in Lincoln. Now with 11 miles of the Bikeway constructed, accessibility to the Blackstone River and Canal is now easy and enjoyable for fishing, canoeing and cross-country skiing. Our state has successfully transformed land that was once a dump to land that is transforming people and reconnecting them to nature.

While we have made considerable progress, we are not done. The completed section of the bikeway passes along the Blackstone River through Cumberland, Lincoln and Woonsocket. As wonderful as the completed section is, a significant amount of work has to be done in order to connect the Blackstone Valley bikeway to both the East Bay bike path and to the Massachusetts border. Despite the Rhode Island Department of Transportation and Rhode Island Department of Environmental Management’s work to plan and construct the bikeway, its completion is elusive. The reason is funding.

We have worked with Rhode Island Department of Transportation officials to determine a completion date for the Bikeway and the amount of funding necessary. As of right now, it is projected that completion could take place in seven years if we continue to work hard and as long as the $31 million needed for construction is secured. To make the completion of the Blackstone Bikeway by 2017 a reality, residents, governmental leaders, community groups and organizations need to take responsibility to find the funds to complete the Blackstone Bikeway.

To date, we have 11 of the less-expensive miles of the Bikeway completed. Additionally, we have $1 million of the $31 million needed to fund the more-expensive miles ahead. We must not wait and assume that someone else will step forward and secure the funding to complete the rest of the Bikeway. We have done this for too long. It is time to stay focused and bring the project to full completion. While cutting through the dense riverfront of Central Falls, Pawtucket, East Providence, Providence, Woonsocket and North Smithfield is going to be difficult, the completion of the bikeway is within our grasp. We need to urge its completion to every local, state and federal official asking them to help us find the construction funds to build. This is a call to action to get involved and continue to remind our officials to push for the completion of the Blackstone Bikeway by 2017.

Even with the State’s growing budget deficit, we must not waiver from completing the Blackstone Bikeway. Our state has many priorities for recreational spending and we realize that the Blackstone River Bikeway is just one of them. However, this one has been on the agenda for over three decades. It is time that the completion is moved to the top of the list. Don’t think of the bikeway as simply being a place of recreation. With gas prices steadily increasing, it provides Rhode Islanders with a way to bike to work, shop for groceries and travel. The Blackstone River Bikeway is quickly becoming the new Main Street in the Blackstone Valley. The economic, environmental and health benefits from using the Bikeway cannot be overstated.