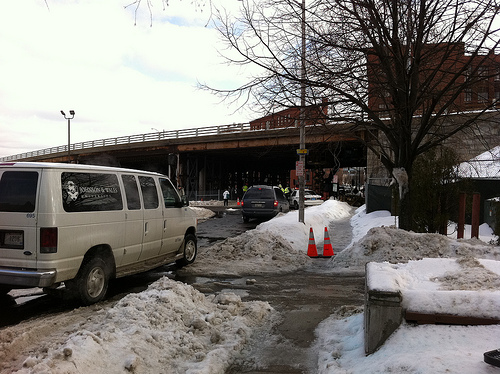 Today they moved over to the west side of the street and closed the sidewalk on that side. Fine, except for where the hell are pedestrians supposed to go now?

In the photo above, two cones block the sidewalk at a curb cut. If a Johnson & Wales van were not illegally parked at that curb cut, it would still be pretty much impossible to leave the sidewalk there as there is a 6 inch deep puddle of water and slush in the way. Of course there is no crosswalk here, so pedestrians shouldn’t be leaving the sidewalk to cross here anyway. Even if there were a crosswalk, there is a 3 foot high ice pile blocking the opposite sidewalk from the street, so pedestrians who overcome the lake of slush and the illegally parked Johnson & Wales van, would then need to invoke their ice climbing skills to get out of the street and back onto a sidewalk.

Of course, all that done, if your destination is southbound on Chestnut Street, there is then no way to get off that other sidewalk, to cross Friendship Street and continue south on Chestnut.

So what are pedestrians doing, walking in the street, up to the cruiser where a Providence Police officer is sitting doing Maude knows what getting paid Maude knows what to do it, then negotiate through the construction equipment, potholes, puddles, ice, and moving traffic to finally reach a sidewalk that itself (though under a bridge) is covered in ice.

Rhode Island Department of Transportation, if this is an example of the accommodation you are going to provide to pedestrians during the duration of the Route 195 removal process, then just stop right now. Stop what you are doing and leave. Give the City the money and we will figure out how to remove the highway ourselves. Until you realize that transportation means more than just cars, please just stay out of Providence.

RIDOT is not providing proper accommodations for pedestrians in the 195 work zone. Dislike.

Work has been moving right along to remove the Old Route 195 (we need that land available for taxable development). This week they started removing the wood from under the deck on the overpass at Chestnut Street. It has...