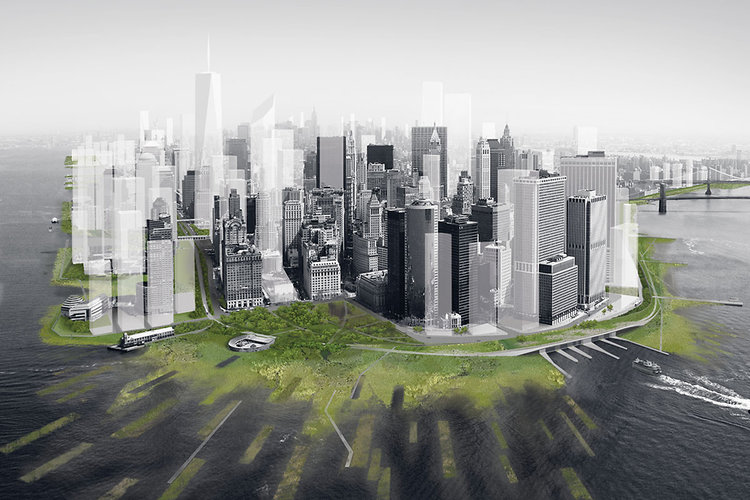 Fast Company: A Plan To Hurricane-Proof New York, With A Ring Of Wetlands

In the wake of Hurricane Sandy, there have been a flurry of ideas on how to deal with the prospect that storms of such magnitude may no longer be once-in-a-lifetime events but the most visible manifestation–if you’re not a polar bear–of the havoc wreaked by climate change.

Seawalls. Levees. The kinds of things the Army Corps of Engineers typically builds to protect low-lying places like New Orleans just aren’t feasible for a place like Manhattan, says Stephen Cassell, the cofounder of New York’s Architectural Research Office. “It’s hard to predict how bad climate change will be,” Cassell says, noting that Sandy’s devastating surge was nearly 14 feet, which wasn’t even the worst-case scenario. “What if we build a barrier and the surge goes beyond that?”

But here’s the payoff: The owner’s tax bill under that scheme would climb another $2,790 if he purchased a second lot with a taxable value of $10,000 — but by only $930 if he used that money toward building.Thus, hoarding would be discouraged; development encouraged.

The two-tier property tax has a proven record of success. In 1979, Pittsburgh began taxing land at a rate six times higher than improvements. In the ensuing decade, building permits increased by 70.4 percent.

And speaking of Pittsburgh…

The collapse of the steel industry soon caused ripple effects throughout the local economy. Gulf merged with Chevron and sold its Downtown headquarters. Climate-controlled shopping malls in Monroeville and later Ross lured shoppers from Downtown to the suburbs, where the parking was free. Some businesses headed the same way.

…the biggest change has been on the residential side. Thirty years ago, when the Central Business District was the hub of retail and industry, few envisioned a time when it would become a housing enclave.

As more people move into downtowns, businesses seeking to accommodate their employees will follow, he said. That in turn will bring more retail — in essence, reversing the flight that occurred decades ago.

The Atlantic Cities: Public Funding for Stadiums Jumps the Shark in Miami

Cities readers know that one of my biggest economic development peeves — right alongside government-backed casinos — is the gargantuan public giveaway to professional sports stadiums. And according to the Brookings Institution’s Adie Tomer and Siddharth Kulkarni, writing earlier this month in the Sun Sentinel, the outrageous, over-the-top deal for the new Miami Marlins stadium should once and for all end the “era of publicly funded stadiums.”

Most recent Massachusetts Institute of Technology or Harvard University graduates who are starting an Internet company aren’t hanging around Waltham. “They don’t have the social network out in the suburbs that would lead them to any of the venture firms on 128,” Webb said.

“The heart and soul of the start-up ecosystem is focused on Cambridge, but there’s a new energy in Boston,” said Roy Hirshland, president of T3 Advisors, a real estate advisory firm in Waltham that worked with Battery Ventures.

In fact, the South Boston Waterfront is undergoing a rapid transformation with new office towers, condos, and lab space planned for the waterfront neighborhood renamed the Innovation District by Menino to attract high-tech tenants. Recently the car sharing company Zipcar Inc. and the growing software company LogMeIn Inc. inked deals to move there.

If companies are leaving the Route 128 belt for more urban destination, can’t we entice a few to Providence and our (so-called) Knowledge District?

As Hurricane Irene continues to track towards Southern New England, the Providence Emergency Management Agency warns residents to prepare for the storm.