REBOOT is an occasional series of posts on Greater City Providence where we identify areas of the city that display poor urbanism and propose ways to improve them.

Our interventions may be simple and quite easily realized, or they may at times be grand and possibly take years or decades to complete. Either way, we hope they generate interest and discussion.

Beneath College Hill there lies what could someday be the workhorse of our metropolitan transit system, a tunnel. Not the one the buses and trolleys run through between South Main and Thayer Street, a rail tunnel. The East Side Rail Tunnel has been sealed up since about 1993, no trains have run through it since round about 1976. Built for under $2 million in 1908, the tunnel provides Providence with untold savings in trying to jump start a regional rail system.

So where is this tunnel? Know that big blank concrete wall between Cafe Chokolad and Mill’s Tavern on North Main? The entrance is up above there. The tunnel runs under College Hill passing under Thayer Street near Waterman Street and emerging just west of Gano Street. The tracks out the west portal continue toward the erect bridge over the Seekonk River.

In the past the tunnel provided passenger rail service between Providence and Bristol and Fall River. Later passenger rail was dropped and freight trains used the tunnel. Before it was sealed off, it was proposed that the tunnel would be used as an automobile expressway connecting Route 6 to Route 44 (that’s part of the reason for the Henderson Bridge). Today the tunnel is just sitting there. It is time for us to put it back to use.

Mayor Cicilline proposes using part of any stimulus money Providence may get from the Obama administration to study and build a Downcity streetcar line. As part of that planning I say we plan to re-use the East Side Rail Tunnel for light rail service to East Providence, the East Bay, and points in Massachusetts (maybe even all the way back to Fall River).

How and where those eastward rail lines would go we’ll discuss in Part II, now we want look at how will trains get into the tunnel.

The tracks leading into the tunnel were part of the “chinese wall” of elevated rail lines between Downcity and the State House which were removed to make way for the River Relocation Project. Because of this the tunnel portal sits above street level. The easiest way to reconnect rails to the tunnel is to build another elevated structure.

The Illustration at the top of this post shows a possible route for a new elevated light rail line. Tracks would emerge from the tunnel under Benefit Street between Mill’s Tavern and the Providence Art Club and travel on a viaduct over North Main Street and the Metropark lot at Steeple Street. The viaduct would then make an S-curve crossing Canal Street and the Moshassuck River to run behind the Citizens Building. The viaduct would then meet Exchange Street where a station could be built across from the Waterplace condos. Trains would continue on Exchange Street into Kennedy Plaza. From there they could head west and/or south to serve the rest of the city.

Alternately a station could be located right at the tunnel portal above North Main Street. However I think the Waterplace location makes for a better station. It sits a quick two block walk from the Amtrak Station, is in the center of a dense residential area with Waterplace Condos, Avalon Apartments, and the Capitol Cove Condos nearby, and sits within a block of the Citizens Building, the future BCBSRI Headquarters, the AmEx Building, and amongst parcels that could see dense office and/or residential development in the future.

Currently there is a parking lot where the tunnel portal is, the area between the portal and North Main Street could be excavated to allow for this parking to be moved down to street level under the new tracks.

An elevated rail line! Are you daft?

Yes, we did tear down the “Chinese Wall” because it created a barrier between Downcity and the State House. Yes, we are tearing down Route 195 because it creates a barrier between Downcity and the Jewelry District. Yes, people in Providence would not be all too enthused to build a new elevated structure Downcity. However, an elevated structure need not be a barrier. 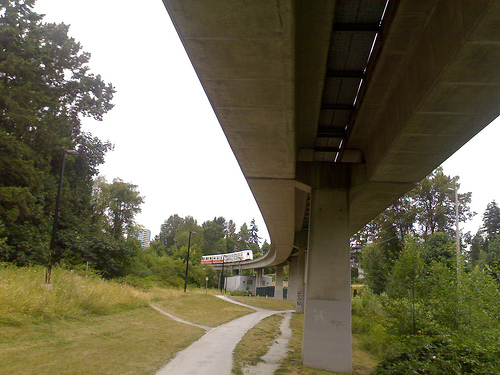 This photo by sillygwailo from Flickr shows the underside of the Vancouver SkyTrain. A new light rail viaduct in Providence can be a slender structure with pleasing ornamentation and lighting. Areas beneath the viaduct should be properly programmed to allow for seamless integration of the streetscape. At the Waterplace Station for example, a small restaurant or cafe can be installed with outdoor seating along the riverfront at Waterplace park. At North Main Street development of the Metropark Lot will create a solid streetwall on the west side of the street.

Can’t there just be a ramp for the trains to climb?

Well, yes, there could be. I don’t know the exact height of the portal above North Main and I don’t know the maximum incline that a light rail vehicle can climb, but it is likely possible that a ramp could be built between North Main and the portal to bring trains up into the tunnel. However, if we bring trains down to street level, then they will have to travel in the street. As anyone who has ever traveled in this area knows, the streets in this area are highly congested, especially at rush hours. Putting trains into the mix will only worsen that congestion and result in trains being stuck in traffic. Putting the trains on the street could easily add 5 minutes to the trip between Kennedy Plaza and the tunnel portal. Building the viaduct keeps the trains and cars separated, allowing each to move freely.

Why do we even need rail to the east?

There are only two crossings from Providence to points east, the Washington Bridge and the Henderson Bridge. All commuters and visitors to our city from points east come through these two points. RIPTA route 60 which serves the East Bay has a high level of service and dedicated passengers, but the bus has to sit in traffic with everyone else. And aside from Route 60 and a few East Providence buses, there’s not much in the way of mass transit bringing people in from the east. Without the water barrier, people have more options coming in from the west. From the north we have Commuter Rail and that rail is being extended south. The East Side Rail Tunnel provides the best option for moving people into the city via mass transit without making that transit sit in the same traffic that people are trying to avoid.

In the next REBOOT we’ll be looking at the eastern portal of the tunnel and exploring some of the easterly locations that could be served by transit running through the tunnel.