On Monday the city Planning Department and RIDOT showed updated plans for the street grid that will be built when Route 195 is torn down. They showed the entire plan area on both sides of the river, most people in attendance were most interested in the Wickenden Street interchange alternatives. I will look at some things about the west side in a later post, but now I’ll focus on Wickenden.

Three alternatives for Wickenden were presented, let’s look at them:

UPDATE 02/05: I neglected to mention that the City and RIDOT are accepting comments on these alternatives through the end of business on Tuesday, February 16th. Contact Melanie Jewett in the Planning Department and/or Lambri Zerva at RIDOT. 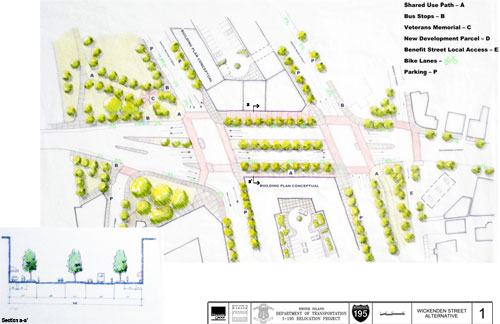 We can basically call this the RIDOT alternative. In this option, the right turn lanes from Point Street to South Water Street remain. This was resoundingly rejected by those in attendance. Other changes from the original proposal include the number of lanes on Wickenden eastbound and the number of lanes on South Main from the highway is reduced from 4 to 3.

RIDOT also originally proposed a pathway through the center of the median as a way to move pedestrians and bikes from the southeast corner to the northwest corner. This pathway is eliminated in favor of those movements being made more conventionally through regular crosswalks.

Also, Benefit Street now wraps around the church from Wickenden to Traverse. Previously, Benefit rounded the church from Traverse, but dead-ended short of Wickenden. This section of Benefit, which currently runs northbound past the gas station will be turned around and now run southbound. 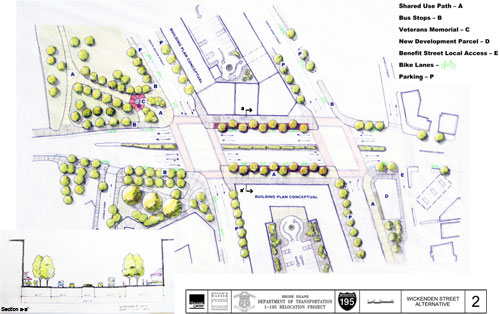 Alternative 2 and 3 are quite similar, to each other and not terribly different from the RIDOT alternative, the odious right turn lanes on Point Street go away in both alternatives. Alternative 2 retains a median on Wickenden Street, however that median is narrower than the RIDOT plan.

The lane reductions and changes to Benefit Street remain the same. 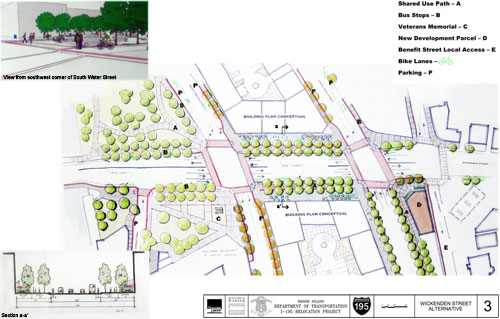 Alternative 3 is much the same as 2, the key difference being that their is no median on Wickenden Street.

To median or not to median

I left before the end of the meeting, but the consensus in the room seemed to be forming around keeping the median, this also seemed to be RIDOT’s preference. RIDOT was pushing the safety benefits of the median as a pedestrian refuge and I have to say, I do agree with that.

Anyone who has ever crossed Memorial Boulevard at College/Westminster (or watched the RISD students do it) knows how intimidating crossing four lanes of traffic can be. Consider being physically challenged or having small children in tow and it becomes even more daunting.

Of course there are urbanist arguments for not having a median. A street without a median is simply more urban in style. There is also a traffic calming effect of having cars traveling in direct opposition to each other, oncoming traffic encourages people to slow down. Funneling traffic into a one-way reservation can encourage drivers to move faster. The length of the median and the number of traffic lights in a short distance should not allow for traffic to pick up these speeds, and I for one feel better with the median for refuge if needed. 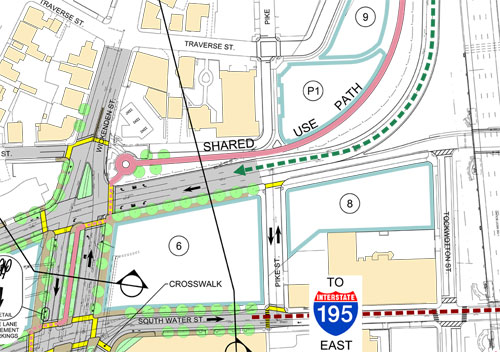 I was shot down on this, but I would like to see Pike Street extended all the way through from Traverse Street across South Main to South Water Street. Current plans have Pike ending at Traverse then picking up again as a one block street between South Main and South Water.

RIDOT does not like this because RIDOT does not want traffic backing up onto the highway. I can understand this, there is a danger in having traffic back up onto the highway (of course it happens all over the place and accidents tend to be few). The problem as I see it, is the ramp from the highway merges with South Main and does not actually meet (and acclimate to) city streets until it reaches the light at Wickenden. Having a light at Pike Street slows highway traffic sooner. I think adding a lane to the ramp to allow for stacking and timing lights (making longer greens at the morning rush) can alleviate the back ups onto the highway. The danger of high-speed traffic penetrating all the way to the Wickenden intersection is a bigger danger in my opinion as it impacts pedestrians and cyclists.

Running Pike Street all the way through also re-establishes the street grid south of Wickenden, allowing more areas for local traffic to move around.

Anyone who has travelled through this area is aware of the jug-handle that swings traffic around to make the left onto Benefit. That jug handle goes away, but RIDOT plans to create a much larger jug-handle going in the other direction.

Westbound on Wickenden, traffic will be prohibited from making a left turn onto South Water Street, which is the way to get to Route 195 eastbound. Instead, traffic will make a right onto South Main Street, a left onto Dollar Street (which is a new street before the current James Street), then a left onto South Water Street (where there will be a traffic light), then proceed straight through the Wickenden intersection and off toward 195.

This was very unpopular among those in attendance. The reasoning on RIDOT’s part is that the current left turn causes too many back ups on Wickenden, allowing through traffic only at South Water and forcing left turning traffic to make the South Main > Dollar > South Water loop will alleviate those back-ups. I questioned why they thought people wouldn’t just turn left anyway. Also the fact that people stuck in that back up are kind of S.O.L. People coming from the Brook, Hope, Ives area should use Gano, go through the park, and get on the highway from the other side, if they don’t know any better, it is kind of too bad. RIDOT could help by making signage on the far East Side direct traffic to Gano rather than down Wickenden to get to Route 195.

A compromise proposed was to prohibit the left turn only during rush hours, the back up only occurs during the rushes, so why make the loop a permanent condition to solve a problem that does not occur throughout the day.

Next up, I’ll take a look at the west side streets.

Photo by Jef Nickerson RIDOT announced today that the old Route 195 bridge over Wickenden Street will begin being dismantled Sunday (01/10) evening. RIDOT expects this work will take approximately one week to complete...