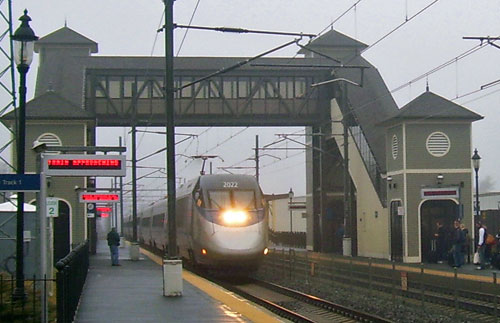 RIDOT is getting $1.2 million from the stimulus to study a third track at Kingston Station. The third track would provide a siding, allowing MBTA commuter rail trains to serve the station while highspeed Acela trains are able to move through without stopping.

However, though we are getting stimulus love for Kingston Station, New England gets the shaft on the $8 billion federal high speed rail stimulus porgram. New England is getting under $200 million dollars or about 2% of the total funds.

Massachusetts really lost out, no money for New Bedford/Fall River commuter rail, no money for the “inland route” which would have upgrade tracks between Boston and Springfield and improved service on the Worcester commuter rail line, and no money for the $1.9 billion north/south rail link in Downtown Boston (that last one is no surprise, no one wants to open the PR pandora’s box of spending more federal money in the Central Artery corridor post-Big Dig).

New England did get money to move forward on improvements in the New Haven – Hartford – Springfield – Vermont corridor, and to expand Amtrak’s Downeaster service north from Portland to Brunswick, Maine.