View from intersection of Smith and Canal Streets

The developer described the building in a presentation to the Commission:

The first phase of Capitol Cove was the construction of Building A in 2005. The current phase is development of Building B on Parcel 6, and the project has been renamed to The Commons at Providence Station. The project will consist of 169 units of residential apartments, approximately 169 enclosed parking spaces, as well as amenity areas, leasing office, and community spaces.

Site
The site extends the established street grid and breaks down
the scale of the building into an appropriate size for the site. The site boundaries are Smith Street to the North, Canal Street along the East, and the existing Building A along the South edge of the site towards Park Row. The West elevation of the building faces the catenaries and rail line of the Amtrak/MBTA commuter rail lines.

The entry to the site will be along an existing road which runs parallel to Building A. The drive entry up to Building B will consist of a circular courtyard and will provide a drop-off area, entry into the garage (west side), and an area set aside for van or truck parking for building deliveries. This space will also accommodate moving trucks to allow for clearance of any vehicular or pedestrian traffic within the courtyard entry. The Riverwalk will connect from Building A up to Smith Street.

Design
The approved design has been maintained for the new project. The approach to newer, more efficient building materials and finish materials has been considered in the current design. The shape of the building and surrounding area remain true to the intent of the original design approved by the Committee in 2003.

Facade
The design incorporates architectural variety in the approach
to materials to allow for smaller, distinct architectural districts rather than a monolithic development. Materials used in Building A will be incorporated in Building B. The buildings will be finished in two tones of brick, metal panel accents, and exterior painted cementitious panel system.

Summary
Building B is a challeng ing use of the undeveloped area of Parcel 6 because of the close proximity to the Amtrak/commuter rail lines, which generate noise and feature prominent catenary lines. These detrimental features make this parcel especially difficult and costly to develop. Taking these challenges into consideration, the team seeks to address these issues with design solutions. The development will include a continuation of the Riverwalk from Building A, and complete the connection from Park Row West to Smith Street, allowing uninterrupted pedestrian access. The area along the Riverwalk will include landscaping similar to that on the adjacent sites. The building will be designed and built to follow LEED Design Guidelines and will seek to meet LEED Silver criteria at minimum.

The project team is: 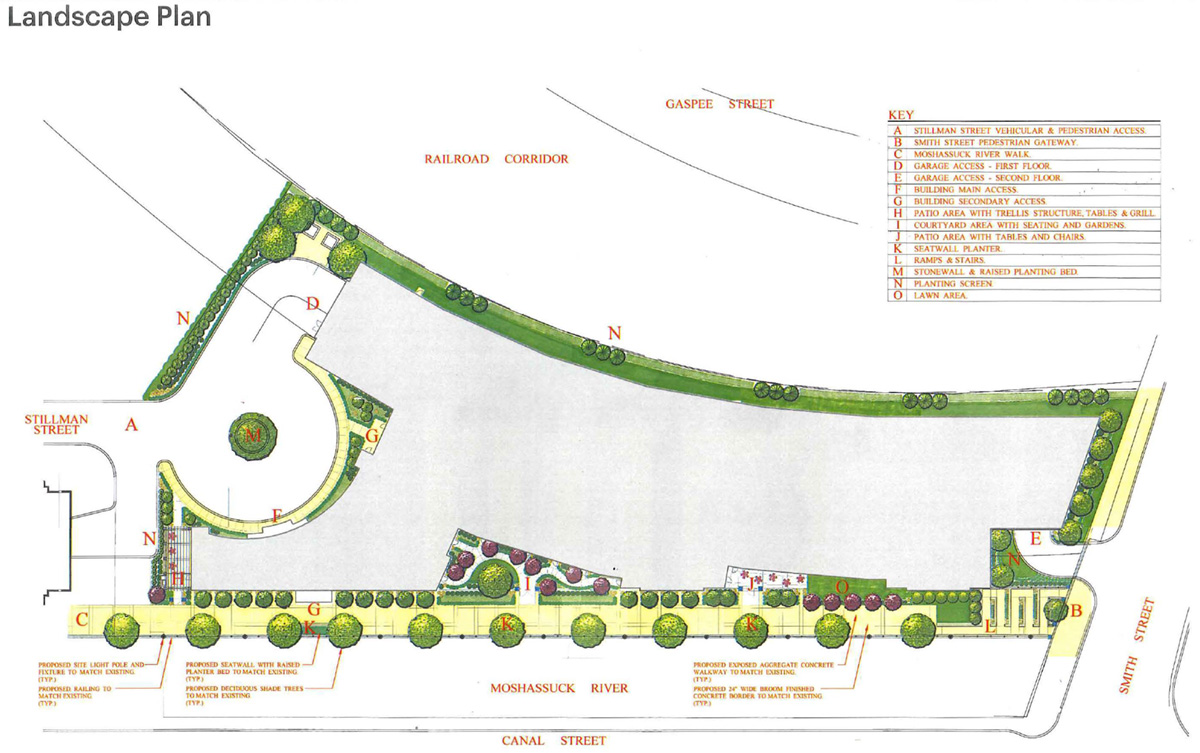 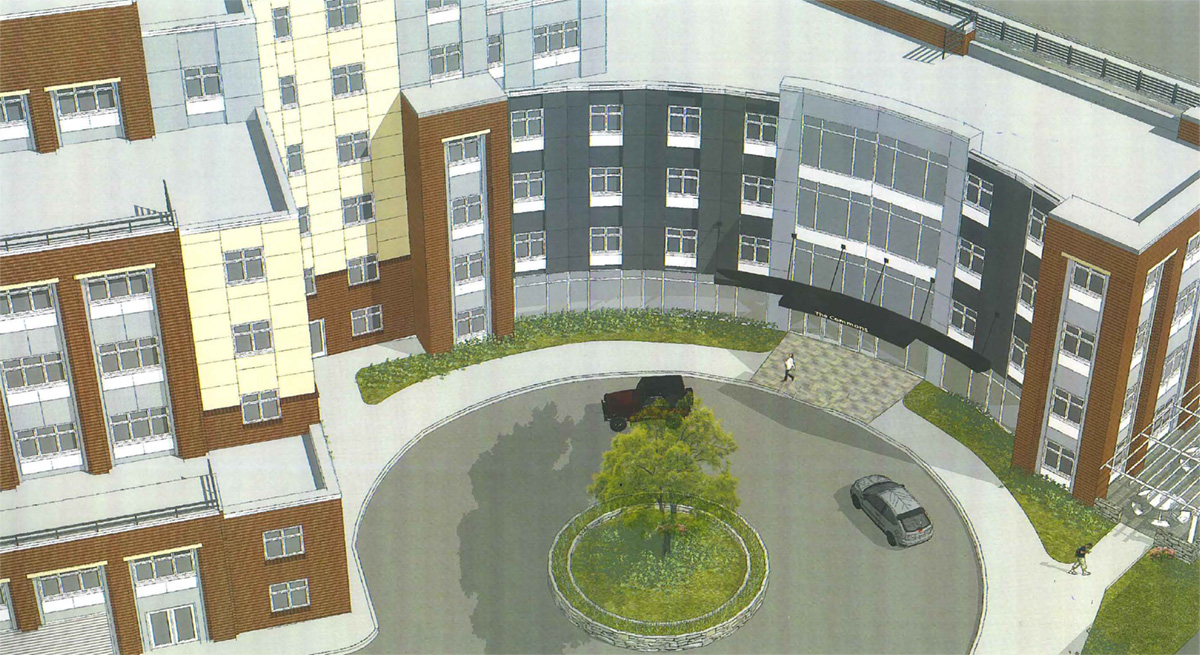 The developer will design and maintain the riverwalk to the same standards which exist currently at the existing Building A. The plan includes a landscaped stair and ramp system to reach Smith Street which is at a higher elevation than the riverwalk. It does not include any additional bridges over the river. 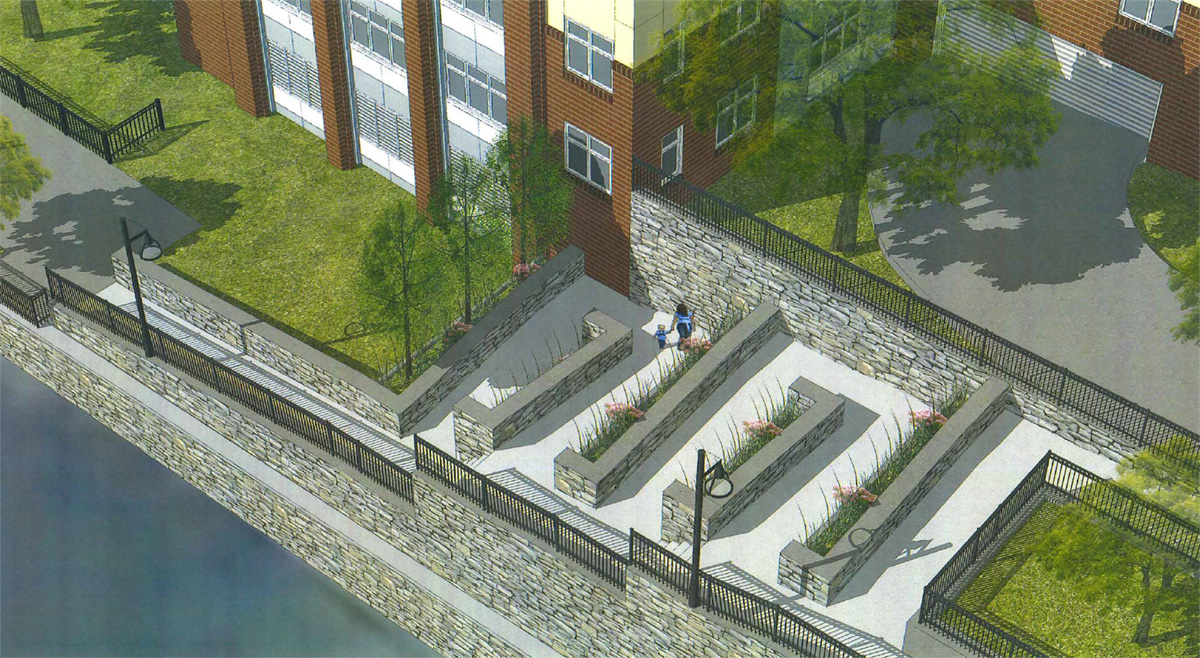 Stairs and ramps to Smith Street, Moshassuck River in the foreground.

Plans are proceeding for a multi-story apartment building by Canal Street downtown that would be built on land by Providence Station and across from the Roger Williams National Memorial, according to documents filed...

Second phase of Capitol Cove and alterations to the GTECH Building on the December 10 Capital Center Commission Meeting.