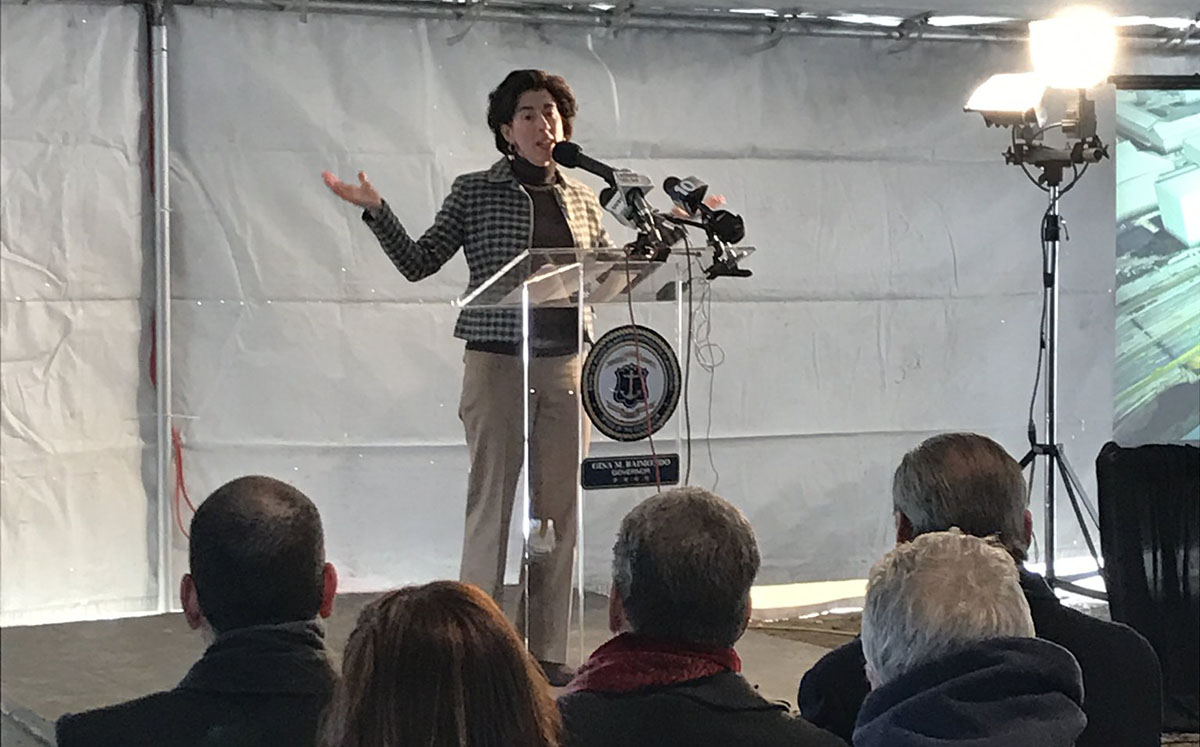 RIDOT hosted a kick-off event for the 6/10 Connector project this morning. Press release from RIDOT:

The 6-10 Interchange rebuild languished for 30 years. Today’s ceremony launched the $410 million project using a design-build approach that will save money and complete the project more quickly than anticipated. During the years of indecision and inaction on this vital highway link, its network of bridges deteriorated to the point where seven of nine bridges were classified as structurally deficient. Temporary supports were installed and millions of dollars spent in a series of repair projects necessary to keep the highway safe and open.

The contract to rebuild the 6-10 Interchange was awarded to joint venture group 6/10 Constructors based on the high score of their technical and financial proposals. The joint venture team led by Barletta Heavy Division, Inc. includes contractors O&G Industries, Inc., D.W. White Construction, Inc. and Aetna Bridge Company. The design team in the joint venture is led by AECOM with key design sub-consultants consisting of VHB, Commonwealth Engineers & Consultants, Inc., Crossman Engineering and McMahon Associates. The joint venture’s proposed cost for the design-build contract is $248 million.

“For too long, the disrepair of this interchange symbolized Rhode Island’s failure to invest in ourselves,” Governor Raimondo said. “Today, we’re taking a big step forward. Working with federal, state and local supporters, RIDOT will revitalize the 6-10, bringing it into a state of good repair while also creating greenspace, bike paths and good construction jobs for Rhode Islanders.”

U.S. Senator Jack Reed said, “Addressing the deficiencies of the 6-10 Interchange has been on the state’s ‘to do’ list for decades. It took the leadership of Governor Gina Raimondo, Mayor Elorza, neighborhood and state leaders working with RIDOT to finally get a plan off the drawing board. This is a smart investment that will improve highway safety and traffic flow and will spur new opportunities for economic development in the area.”

“Modernizing our infrastructure is one of my top priorities,” said U.S. Senator Sheldon Whitehouse. “Governor Raimondo is leading the charge on this enormously important project to invest in the local economy and the quality of life for Rhode Island motorists. The delegation will keep fighting for every available federal dollar to continue putting Rhode Islanders back to work upgrading our infrastructure.”

RIDOT Director Peter Alviti said, “When we all first gathered at this site two years ago, it was to articulate a shared vision. The 6-10 Interchange was the symbol of what we absolutely had to do in Rhode Island – rebuild our infrastructure. We gathered to express our commitment to that process. Today we are fulfilling that commitment.”

RIDOT specified a design-build contract to save time as it allows construction and design to proceed simultaneously. Because the designer and the contractor are part of one team, the risk of cost overruns is reduced. In addition, this approach historically leads to fewer change orders and design errors that would affect the cost of the job.

The winning team produced a proposal that will reduce the impact on traffic by rerouting and phasing the traffic throughout the project to ease the impact of construction on streets and neighborhoods. It includes innovative accelerated bridge construction methods similar to those used for recent “over the weekend” bridge replacements RIDOT has done. The design also provides permanent solutions to traffic and congestion that exist now.

Approximately 20 percent of the design has been completed. RIDOT expects the 6/10 Constructors to complete design in one year, and during that time RIDOT, working with the Federal Highway Administration, will conduct the National Environmental Policy Act process for this project. Following this work, construction is expected to start. The project is scheduled for completion in Fall of 2023.

Having diagnosed Rhode Island's transportation bureaucracy as "dysfunctional," Governor Raimondo Wednesday outlined the steps she's taking to fix it -- with or without revenue from proposed truck tolls.