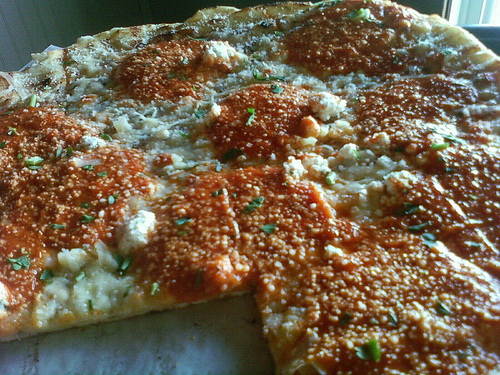 I think a lot of these Travel + Leisure Magazine superlatives are getting a bit silly. The whole “America’s Favorite Cities” thing just seems like a whole lot of link bait to me (even if, according to my Facebook wall and Twitter stream, Providence seems to be doing pretty well in the rankings1).

Is it strange that I am surprised to read that Providence is the third best pizza town, after Chicago and New York? Sure we have a lot of Italians, and sure we invented grilled pizza and that weird cold pizza strip thing (which I refuse to embrace, sorry), and sure we have a lot of college kids. But are we really that good when it comes to pizza?2

I love me some Fellini’s and Nice Slice is just grand. Speaking of grilled, Bob & Timmy’s is way too close to my apartment for my waist line. But I lately have found myself craving pizza. I feel like there is a real pizza (and I base that on living in New York probably). Is there anyplace in Providence to get a slice that you fold in half and wash down with a Coke while walking down the street?

People, help me, where is Providence’s best pizza?

An evening walk turned into a frightening ordeal for a Pawtucket man after he was hit by a stolen pizza delivery car, just a block away from his home.

While the Skating Center closed at 2pm to clear snow, they do have some great events coming up next month. Check out our spectacular events! Saturday, February 12th, 5-8pm – Hearts + Scars: An Evening with...