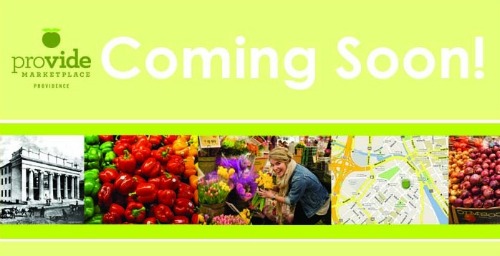 Apparently this was all anyone was talking about over the weekend and I completely missed it. Sometime this weekend posters were placed on the doors of the shuttered Arcade claiming that a new marketplace was “Coming Soon.”

Channel 10 ran with the story that a market is opening in the Arcade, ProJo however picked up the phone and called the owners of the Arcade.

“I had nothing to do with the posters,” said Evan Granoff, of the family-owned Granoff Associates.

Granoff said he’s never talked to the two men or anyone else associated with the organization. Currently, there are no definitive plans for the building.

I think Joelle Crane from the Providence Foundation is on the right track, she was quoted in the ProJo saying, “It’s an interesting joke.”

And interesting it is I’ll say. If The Hub actually moved into the upper floors, and a food market went in on the ground, that would be ideal.

I have not taken the time to pick up the phone, really, I’d prefer not to be told this is some elaborate joke (well timed to coincide with the release of the PPS Ten Most Endangered Properties list). Here’s how ProVide describes themselves on their website:

ProVide, the premier artisanal food and wine marketplace, is finally coming to Providence, RI. Two years after partners Giancarlo Mostaccioli and Tommy Pacheco won permission to convert the city’s long-dormant Westminster Arcade – known to locals as simply The Arcade - into a large-scale grocer’s, our team has paired with local farmers, artisans, administrators and institutions to transform the historic shopping center, located in the center of Downtown Providence and declared a National Historic Landmark in 1976, into Rhode Island’s foremost culinary mecca.

The marketplace, located at 66 Weybosset Street, is poised to become the ultimate destination for food lovers all over the Northeast to shop, savor and explore. Its offerings include in-house farmers’ markets for locally sourced meat, seafood, produce and dairy; a culinary educational center that will feature demonstrations from local chefs and food purveyors, and a discerningly curated selection of boutique eateries and confectioners. A delight for the self-styled epicure as well as the novice cook - indeed, for eaters across the board – ProVide aims to live up to its name.

Awesome right? Too bad 66 Weybosset Street is the address of the Arcade Parking Garage.

Photo by Jef Nickerson We don’t often deal in rumors around here, but this one is too good to let pass. A member of UrbanPlanet UrbanPlanet posted that they had heard that representatives from The Hub were coming...