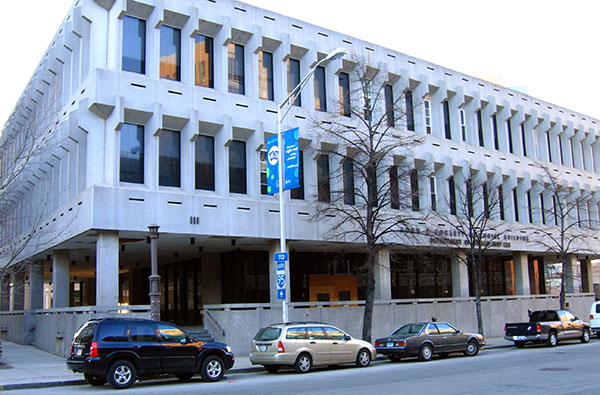 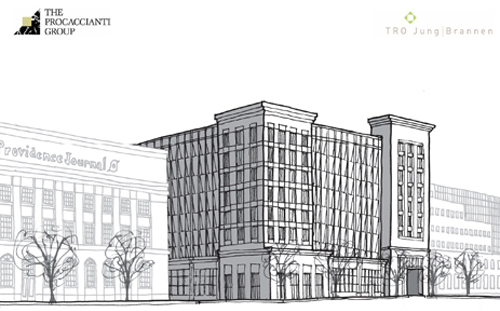 Rendering of 111 Fountain Street from The Procaccianti Group

Tomorrow (Monday, July 9th), the Downcity Design Review Committee will consider a proposal by The Procaccianti Group (TPG) to demolish the Fogarty Building, located at 111 Fountain Street, Downtown. If the DRC grants the preliminary approval for demolition, the DRC will then review plans for the building proposed to replace it.

TPG describes the new building they plan to build as follows (rendering above):

This new building will contain approximately 22,000 square feet of Class “A” retail space at street level in an engaging configuration that connects several existing pedestrian and vehicular destinations. There will be ample parking to accommodate the retail space in the new building, as well as the numerous events from venues throughout the Downcity area.

Greater City Providence is eager to see a new building constructed at the Fogarty Building site. Greater City Providence encourages the DRC to approve the plans to demolish the Fogarty Building, and based on the renderings we have seen for the new building, believe TPG is going in the right direction (finally) with the design for the new building. Design-wise, the DRC should ensure that whatever material screens the parking decks, actually screens the decks. We should not be able to see cars lined up inside that building. The screening being used at the Westin down the street appears to be adequate and a variation of that material should be used.

The Fogarty Building, as it stands now, leaves a black hole at the center of TPG’s proposed “Power Block.” Work has been progressing fast to bring new life to the west side of Sabin Street with the additions at the Westin and Hilton and the amazing transformation currently underway at the Dunk. On the East Side of Fountain Street we’ve seen a Downcity institution, Murphy’s move into the Cosmopolitan Building. The Fogarty Building sits in the middle of this action, sucking the life out of the surrounding streets.

There are those who would argue that the Fogarty Building is an example of Brutalism (an architectural style that Providence does not have much of) and is worthy of saving. We would agree with this, were it that the Fogarty Building were a good example of Brutalism, it is not. What it is a good example of is poor urbanism. The building sits on a pedestal half a story above the street, cutting itself off from life on the street. TPG had proposed at one point to save the building by glassing in the first floor arcade. This plan would have taken away from the Brutalism that was trying to be saved, and still would have left the building with its urbanist mistake.

While we are happy with the current direction the proposed building is taking, we also can’t help but feel an opportunity has been lost here to introduce something new to the Providence architectural vernacular. The proposed building should sit well with its neighbors The Providence Journal and the Cosmopolitan, however it did present an opportunity to create a playfully modern structure. Being mainly a parking garage, the needs to provide windows for tenants is gone, all that is needed is venting for the garage. A modern, playful, sculptural facade treatment could have been employed. TPG took a daring move with its glass cube addition to the Hilton (with the electronic message board on it), The Dunk renovation presents a building with modern lines and ample glazing, and the Rhode Island Convention Center, while using materials such as stone, also presents modern lines. 111 Fountain could have added to that collection. We do not feel that progress should stop now when TPG is closing in on an acceptable design, however thought should be given to future developments in the area, and how they can introduce modern design to the “Power Block.” TPG’s own proposal for a new building at the site of the Old Public Safety Complex in LaSalle Square and the site of the old circular gas station across from the Hilton are two areas where modern design can be further brought into the “Power Block.”

Greater City Providence encourages TPG to think carefully about the retail tenants they try to attract to the ground floor of 111 Fountain. Certainly, a low cost restaurant would suit the needs of conventioneers and the hotel guests at TPG’s Westin and Hilton hotels, as well as people attending events at the Dunk, however there are neighborhood services that Downcity is currently lacking. TPG is about to bring a lot of new residents into the Downcity area through their Residences at the Westin, and there are already people living in the immediate area at the Cosmopolitan and Regency Plaza among other areas. These residents don’t even have a full service pharmacy (neither the Providence Place nor the Kennedy Plaza CVS feature a pharmacy), also needed Downcity is a grocery store. A full suburban style grocery store may not fit in this location, but a nice urban styled grocery store would. Residents of nearby Federal Hill, who are about to lose their grocery store, would also be potential tenants for a grocer at this location.

Of course it is not only the black hole that is the current Fogarty Building that hurts the retail environment in the “Power Block.” The fact that Sabin and Fountain Streets funnel highspeed traffic between Route 95 and Downcity makes for an unpleasant and dangerous pedestrian environment in this area. The city is supposedly working on plans to rebuild Emmett Square (where Eddy, Fountain, Exchange, and Sabin meet in front of the Westin) and LaSalle Square (where Fountain, Sabin, Broadway, and Empire meet in front of the BCBS building) and make Empire Street two-way between LaSalle Square and Weybosset Street. These plans are not moving fast enough. Fountain Street can be as many as 4 lanes wide, depending on who is driving and due to its lack of road lines. Sabin is 2 or 3 lanes wide similarly. Traffic moves through these areas very quickly, anyone who has ever attended an event at the Dunk or tried to walk from Federal Hill to Trinity Brewhouse can attest to the dangers this traffic configuration presents for pedestrians.

LaSalle Square is the connector from Downcity to Federal Hill, its the route visitors to The Dunk, the Convention Center, and our city’s hotels should be walking to enjoy Restaurant Row. Visitors, workers, and residents alike should be flooding the sidewalks in this areas with foot traffic (well, maybe flooding is a bit of an exaggeration), but with the unpleasant and dangerous environment, they don’t. Greater City Providence encourages the city to step up its efforts to make needed changes to the roadways in this area.

A sad refrain in Providence is, “There’s nowhere to park.” Well, of course there are places to park, you just need to be willing to walk a bit, and on especially busy nights, like when the P-Bruins are playing and there’s a show at PPAC, you might need to be willing to pay. With TPG proposing 500 parking spaces in a garage at 111 Fountain Street, the cries of a lack of parking should lessen, not only from the public, but from TPG themselves. Not being heard by the DRC tomorrow, but previously on the agenda and surely to be on the agenda again shortly is TPG’s proposal to demolish the Old Public Safety Building in LaSalle Square. TPG proposes to use the parcel for temporary parking until such time as they are prepared to move forward with plans to build a new office building at this location. Greater City Providence is not against the idea of demolishing the Old Public Safety Building, so long as an attractive and high-quality building is erected in its place. We do however reject the idea that the lot, once cleared, should be used for temporary parking for any amount of time. The DRC should instruct TPG to fill its parking needs by utilizing the garage that they are building at 111 Fountain Street when they inevitably come back to the DRC with a request for temporary parking at the Old Public Safety Building site. 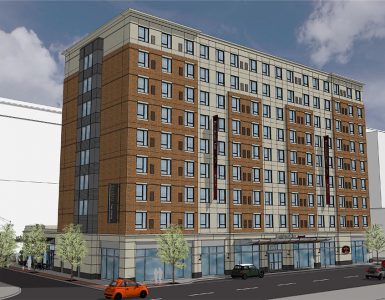 The Procaccianti Group is planning to raze the Fogarty Building at 111 Fountain Street to build a new extended stay hotel. Information below is from their submission to the Downtown Design Review Committee (DRC). 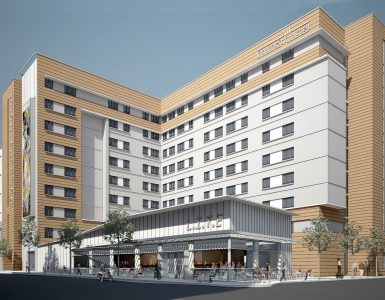