What do you want from your bus stop? 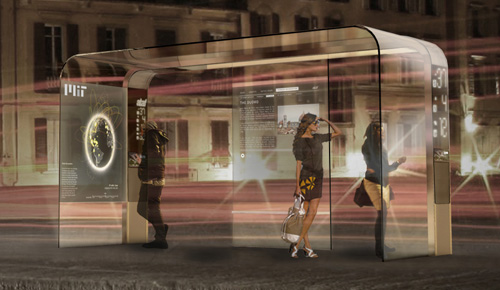 Students at MITs SENSEable City Lab have created the EyeStop, a prototype high tech bus stop for the city of Florence, Italy. The press release

EyeStop, developed by MIT’s SENSEable City Lab, is an exploration into the next generation of smart urban furniture; it aims to enrich the city with state of the art sensing technologies, interactive services, community information and entertainment. The project is partially covered with touch sensitive e”INK and screens, so that it can deliver information to people seamlessly. Users can plan a bus trip on an interactive map, exchange community”relevant information on a digital message board, surf the web, monitor their real time exposure to pollutants and use their mobile devices as an interface with the bus shelter. “Interacting with EyeStop could change the access to urban information in a similar way to how the iPhone has changed our mobile life” commented Carlo Ratti, Head of the SENSEable City Lab at MIT.

At the touch of a finger users can indicate their desired destination; the system will then display the shortest bus route from where they are and the position of all relevant buses real”time. The EyeStop will glow at different levels of intensity to signal the distance of an approaching bus. Riders and passers”by can also post ads and community announcements to an electronic bulletin board placed on the bus stop, enhancing its functionality as a public space “ a place to gather and exchange community relevant information.

In addition to displaying information, the bus stop also acts as an active environmental sensing node, powering itself through sunlight and collecting real time information about air quality and the urban environment. “EyeStop is an experiment into urban computing: it may be considered an “info”tape” that snakes through the city, rising up like a pole or cropping out of the sidewalk like a shelter. It senses information about the environment and distributes it in a form accessible to all citizens” – commented project leader Giovanni de Niederhousern.

Wow, OK. But can it make me a latte? All this Star Trek wonderment makes me wonder, what should a bus stop actually do? Tell me when the bus is coming, yes. Be a trip planner, well that would be great (in Providence it seems it would likely tell me, “you can’t get there from here.”). Surf the web? Um, no. I’m picturing perves (me) watching pornotube videos at the bus stop, that could be fun, or really really terrible. Monitor pollutants? I guess that could be helpful. Do I really want to know though? Post community ads? That could be useful, but as someone who has been tasked in different capacities with monitoring user generated content, I could see this also being a really bad thing.

What do I actually want a bus stop to do? First and foremost, shelter me from the elements, rain snow, wind, sun… Bus stops we currently have in Providence do an OK job of protecting from rain and sun, but they are open on two sides and the third side is perforated, meaning there is no wind protection. Waiting at a bus shelter on a windy snowy day is torture, especially if you don’t know when or if the bus is coming, which brings us to number two.

Real time bus information, vital. I think real time bus information can be a money generator too. Providence is quite small, most places I go I can walk to, but if I knew the bus was on the way, I might stop and wait (and pay) for it. The changing color of the shelter indicating when the next bus is would be cool. If I walked by the bus stop and it was red meaning the bus was almost there, I’d stop and hop on.

Three, trip planning. I’m reading about this EyeStop and laughing. Could you imagine the stickers all over it, the Scratchiti? Could you imagine RIPTA or any other local government agency having the resources to maintain and update an interactive electronic trip planning system at any bus stop? I laugh. A printed map though? That’s doable, isn’t it?

Four… well… there is no four, that’s it, shelter and information about the bus. That’s really all I need. Can anyone else think of anything they need their bus stop to do for them? Am I alone in thinking this EyeStop thing is dead sexy cool, but way over the top? 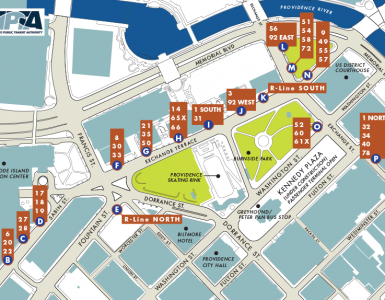 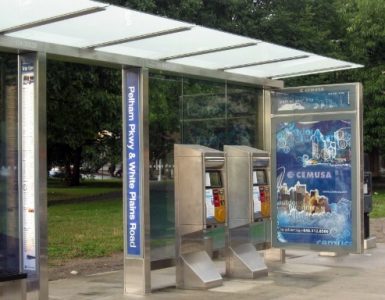