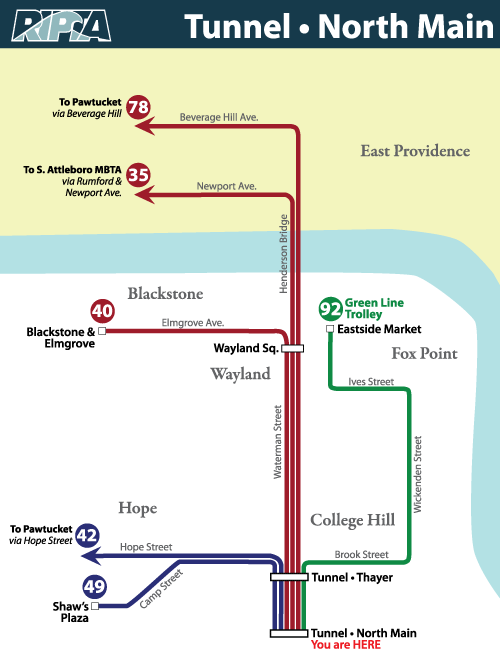 Update 02/25: RIPTA has seen this post and read the comments. They are working on a map/better info system for the bottom of the bus tunnel.

The other night I was standing at the bottom of the bus tunnel waiting for a bus to take me up to Wayland Square. Problem is, though I live here, and though I know RIPTA really well, I wasn’t positive which buses went to Wayland Square. I knew the trolley went close, but I didn’t know if it was after the period it stops running to Eastside Market (I would have been ever so annoyed to get dropped off in the middle of Fox Point).

I know the 35 goes to Rumford and the 40 goes to Butler and both go through the square. I had forgotten about the 78 though, which runs to Pawtucket via East Providence.

I had my iPhone with me so I could have figured it out, and I could have just asked the driver if they went to Wayland Square, but wouldn’t it be nice if there was some way for me to know, like a map or something? The tunnel carries all the bus traffic to the East Side, so a map like the one I just whipped together above, is pretty easy to put together.

A simple map shows the casual transit user or city visitor which buses go where. All go to Thayer Street, easy. Three go to Wayland Square. One goes to Hope Village…

I threw this map together pretty quick. A more comprehensive map would have shaded areas showing points of interest such as Brown University, Hope Village, Wickenden Retail District, India Point Park… A little walking time marker between Eastside Market and Wayland Square would be useful to show that they are almost on top of each other. Another walking time from the trolley to India Point Park. I’d also include another panel with a list of destinations, which buses service them, and bus travel time to them. A time table for each bus would also be very very very helpful (but let’s not get crazy here).

Maybe I should just laminate this and tape it to the wall at the bus tunnel.

Sometimes, you get a map

Way back in February I wrote about the need for a map at the bottom of the bus tunnel to tell you where all those buses zooming through it are going to. I even doodled up a little map as a suggestion for what such a map...