Well, I thought for sure after all the flooding that today’s ride along the East Bay Bike Path was going to be wet at best. I was pleasantly surprised.

We had a nearly perfect ride from East Providence all the way to Bristol. There were a few wet spots, some puddles just south of the Dairy Bee, and some sand just north of Colt State Park.

There were some crews out there tending to some water issues. We passed a crew pumping water from one location, down a ways, and into a sewer or storm drain, but they had run the hose along the edge of the path, and the puddles along the way were less than an inch deep and brief.

We enjoyed a great lunch at Thames Landing when we arrived in Bristol, where we sat outside on Adirondack chairs and admired the bay on such a beautiful day.

The ride home was even better. Some of the puddles had dried. At one point, in Barrington, the DOT crew had run a pump hose across the path, so we did have to dismount to walk our bikes over the hose. A minor inconvenience, but I’m still impressed to see them out there working to ensure life gets back to normal.

Did anyone else get on any of the other bike paths this weekend? How were they? 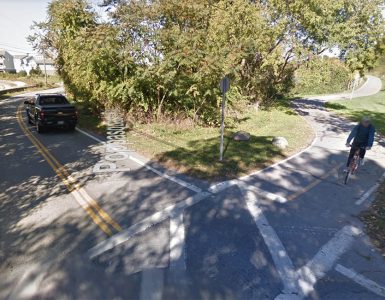 RIDOT to assess safety of bike path road crossings after a child was killed on the East Bay Bike Path in Bristol.

First ride of the season on the East Bay Bike Path.