Commuters make up about a third of the train’s passengers. The state of Maine, which contributes $1.5 million to the line’s $13.5 million annual budget views the train as an economic engine for the state, allowing commuters to live in Maine and drawing vacationers up from southern New England (the federal government provides a $6 million subsidy to the service, ticket sales make up the remaining $6 million, Massachusetts and New Hampshire provide no subsidies). The state of Maine is currently planning a northward extension from Portland to Brunswick to serve more vacationers and daytrippers. As successful as the line is, the federal subsidy runs out in July, Maine Governor Balducci has proposed $8 million in next year’s state budget to make up for the subsidy loss, and the rail authority plans a fare increase.

In the comments section to the article published on Boston.com, one commuter from Maine points out why he takes the Concord Trailways bus rather than the Downeaster. His reasoning boils down to cost and time. One-way service on the Downeaster costs $24 (there are discounts for booking early or if you by a multi-ride pass), one-way service between Boston and Portland on Concord Trailways is $8. The bus ride takes slightly under 2 hours (dependent on traffic and weather conditions) and the Downeaster takes 2 hours 30 minutes.

And there you have the problem with transit in New England. We have short distances, high population density, and a population that is willing to leave their cars at home when there is a viable option, our options are just not terribly viable.

However, there are still gaps. Try taking the train from Providence to Portland. Seems a reasonable request, right? In order to ride the rails between here and there takes two transfers. Amtrak or MBTA Commuter Rail to Boston Back Bay Station, orange line subway to North Station, then Amtrak to Maine. Or, you could just spend 2 hours and 48 minutes in the comfort of your own car driving there rather then rushing from train to train to train.

Let’s try another, Providence to Cape Cod. Kennedy Plaza to Hyannis via Peter Pan Bus Lines is 2 hours and 25 minutes and $30.00 one-way. According to Google Maps it should take 1 hour and 26 minutes to drive that (personal experience says it can be safely done in just over an hour, holiday/weekend traffic can make it upwards of 4 hours, but the bus sits in that traffic too). Considering a round-trip for two costs $120.00 and the travel time is atrocious, it is cheaper and saner for me to rent a car to visit my family down there, if I owned a car already I’d be kookoo bananas to leave it at home and take the bus.

Providence to New Bedford? 30 miles, 35 minutes to drive… 1 hour and 20 minutes on the bus (ridiculously, the bus from Kennedy Plaza goes up to the bus yard off North Main, then back south and out to New Bedford).

Living car-free as I do, I could go on.

So what do we do? We take advantage of this moment in history. In January we will have a new administration in Washington looking to boost the economy, invest in cities, reduce our reliance on foreign oil, and improve our environment. Transit investments in New England touch on all those goals. We take advantage of our political capital, all but one or New England’s counties (Penobscot County in northern Maine) voted blue last week. Our Governors, Senators (Republican and Democrat), and Representatives have to stop with the provincialism and come together to work on what’s best for the region, not just their own states and districts. We have to stop with the tax breaks to poach businesses from each other and set ourselves up, as a region, to be competitive nationally and globally.

Would it be too cheese ball for me to wrap this up by saying, “Yes we can?” 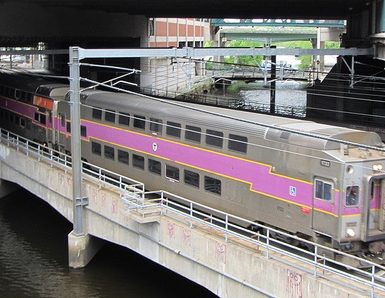