35 Weybosset Facade back in the news 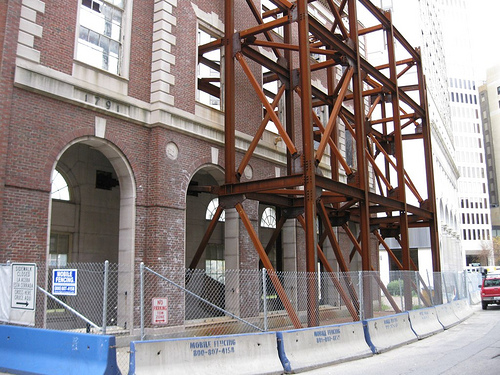 ProJo has a story today about the 35 Weybosset Street facade.

Of course, the area merchants are still not happy about the state of the facade (crumbling) and the fact that the sidewalk in front of it is closed. Why would they not still be upset? Nothing has changed since last fall when O’Connor Capital Partners, the parcel’s owners, sought to demolish the facade.

The Journal story brings to light the fact that O’Connor has not only not been maintaining the facade and vacant lot which was to be OneTen Westminster Street, but that they also owe the city over $10,000 for fees related to the closure of the sidewalk on Weybosset Street.

The city may revoke O’Connor’s right to have the sidewalk closed if they do not pay the back fees, which may just play right into their hands of wanting the facade removed. Rumor on the street is they want the facade removed so that they can sell the parcel. The facade and the restrictions agreed to incorporate it into a new building potentially reduce the value of the lot.

While the area merchants just want to facade gone as the solution to the closed sidewalk issues, James Hall, Executive Director of the Providence Preservation Society would like to see a solution that preserves the facade.

While the Preservation Society’s Hall is sympathetic to business owners’ concerns, he hopes for a more creative solution than demolition.

He says the city derives its authenticity from the fact that its residents have so vigorously preserved its past from the wrecking ball | from the historic houses along Benefit Street to the Masonic Temple by the State House, now home to the Renaissance Providence Hotel.

“Preservation did not create this problem, so it’s tough for us to say, OK, just tear it down already,” Hall said. “That’s rewarding bad policy and bad behavior.”

Late last year we outlined some possible solutions for the facade issue.

New Plan for 35 Weybosset Street Façade to be Announced