Visit msnbc.com for breaking news, world news, and news about the economy

Over the weekend, NBC Nightly News ran a sharp piece on our country’s structurally deficient bridges, focusing on the data in the T4 America bridge report.

At least one person somewhere in the U.S. is driving over a structurally deficient bridge, according to T4 America director James Corless in a report on the woeful condition of our nation’s bridges on NBC Nightly News Sunday evening.

Brought into the national spotlight because of the recent closure of a highly-trafficked interstate bridge over the Ohio River in Louisville, Kentucky and the President’s scheduled appearance at a Cincinnati-area bridge this Thursday, more national media outlets (and Americans and their leaders in Congress, one would hope) are paying attention to the real-life impacts of underinvestment in infrastructure.

Debunking the Cul-de-Sac [The Atlantic Cities]

This is where it’s most apparent – from an airplane window – that American ideas about how to live and build communities have changed dramatically over time. For decades, families fled the dense urban grid for newer types of neighborhoods that felt safer, more private, even pastoral. Through their research, Garrick and colleague Wesley Marshall are now making the argument that we got it all wrong: We’ve really been designing communities that make us drive more, make us less safe, keep us disconnected from one another, and that may even make us less healthy.

A study out of the University of California Transportation Center found that car sharing leads to reduced car ownership, preventing the addition of new cars on to the road and maintaining levels of greenhouse gases.

The study surveyed more than 6,000 households that were part of car sharing networks. Prior to joining the car sharing systems, 2,968 out of 6,281 households owned private vehicles. Upon joining car sharing, that number dropped to 1,507 households with cars-a 50 percent decrease. 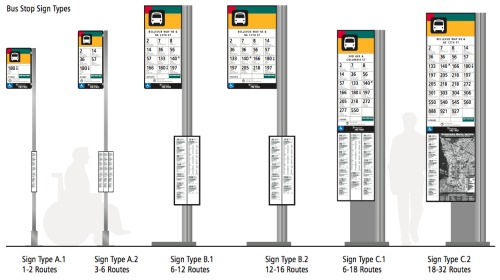 The basic element on every sign is the “route block” which is consistent across all sign types. The route block includes the route number, a modifier (local, express, Sound Transit, etc.), up to two destinations, and symbols indicating connections with Sounder, Link, Sea-Tac Airport, and/or ferries. On the large B and C type signs, these blocks are individual tiles that can be rearranged or removed as needed without producing an entire sign from scratch for each revision.

The Georgia Tea Party has come up with a novel reason for opposing a regional transportation tax that will pay for a light rail project: It might become a terrorist target. Chairman J.D. Van Brink explains:

“Now, if we have a more decentralized mass transit system using buses, if the terrorists blow up a single bus, we can work around that. When they blow up a rail, that just brings the system to a grinding halt. So how much security are we going to have on this rail system, and how much will it cost?”

Rail Service Expansion Imperiled at State Level [The New York Times] “Any notion that somehow rail is subsidized, and other modes of transportation aren’t, is simply not factual,” said Mr. Smith, the...