Reports are coming in from a press conference that Mayor Taveras held this morning, things aren’t good. The Mayor is calling for concessions from non-profits and retirees or the city faces receivership and bankruptcy.

See the end of the post for a Press Release from the City.

Taveras says retiree benefits will be reduced one way or another. Voluntarily, or… he mentions Central Falls, where receiver cut them.

This is a Bankruptcy Warning presser. W/o retirees, nonprofits there’ll be supplemental tax increase; that even may not prevent bankruptcy.

Taveras: “We will reduce retiree benefits,” either thru concessions or in bankruptcy ie C Falls. Will hold mtg w retirees next month.

Mayor points to sacrifices made by Providence taxpayers, teachers, firefighters, police. Calls on tax-exempts and retirees to share in City’s sacrifice. Announces plans for town hall meeting with retirees.

PROVIDENCE, R.I. (February 2, 2012) – Providence Mayor Angel Taveras addressed the residents of Providence, lawmakers and members of the press during a media conference in his office earlier today on the difficult fiscal situation Providence faces. During his remarks, Mayor Taveras warned that without additional sacrifice from the City’s large tax-exempt institutions and retirees, Providence will be pushed closer to the brink.

“Our firefighters, police officers, teachers and taxpayers have all sacrificed in the last year and helped Providence avoid catastrophe. However not everyone has sacrificed,” Mayor Taveras said. “The failure of our tax-exempts to sacrifice has left a $7.1 million hole in our budget. There are more than 600 retirees collecting 5 and 6 percent compounded yearly raises. These retirees have refused to sacrifice and are costing Providence taxpayers tens of millions of dollars of year.”

Mayor Taveras urged Providence residents, business leaders and policy makers to call on the City’s tax-exempts and retirees to share in the City’s sacrifice. He directed residents to visit SavingProvidence.com to join the administration’s efforts to weather the current fiscal crisis.

Mayor Taveras pointed to several state legislative measures his administration will support during this year’s session to help save Providence, including legislation that will ensure the City’s tax-exempts pay for the critical services the City provides them and legislation that provides the City with the ability to collect property taxes on buildings used for purposes unrelated to the educational or healthcare mission of those tax exempts.

“A Providence taxpayer who owns his single residence home in the West End neighborhood and drives a 2002 Toyota Camry saw his taxes increase more than 12 percent last year,” Mayor Taveras said. “Our taxpayers already subsidize the tax exempt institutions in this city. For example, it takes the revenue collected from 19,000 taxpayers like the one I just described to account for the $38 million in property taxes not paid by Brown University.”

Mayor Taveras also called on the City’s retirees who have been the beneficiaries of guaranteed annual raises that compound at 5 and 6 percent each year to share in their neighbors’ sacrifice. The City’s 25 highest paid retirees or their spouses collect at least $109,000. In all, Providence taxpayers are paying $36 million this year in growing pension costs.

The Mayor also pointed to the $38 million taxpayers contribute each year to cover retiree health benefits and announced that the City Solicitor’s office will file an appeal today to Rhode Island Supreme Court asking for an expedited review and a reversal of her ruling. The recent decision that blocked the City from moving Medicare-eligible retirees from the City health plan to Medicare created an additional $8 million gap in the City’s budget.

“As a city, we no longer have the ability to sustain these benefits. It must stop now,” Mayor Taveras said. “Our retirees must be a part of the sacrifice to save Providence. Either retirees will join their neighbors and make a sacrifice to save Providence or they will follow the path of Central Falls retirees who have had their full pensions slashed drastically in the courts.”

Mayor Taveras announced that he will host a town hall meeting with Providence retirees on Saturday, March 3.

Since last year, the Taveras administration has taken proactive measures to combat the City’s fiscal crisis. Mayor Taveras cut his own pay by 10 percent and voluntarily refused a City pension. The Mayor’s office budget has been cut by 13 percent. The administration has revised contracts with the City’s firefighters, police officers and teachers. The City raised residential and commercial property taxes and reduced the allowable deduction on the vehicle excise tax. Mayor Taveras thanked the City’s residents for their sacrifice and asked for their help to encourage those who have not sacrificed to come to the table. 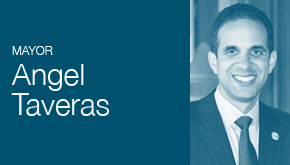 Text from Mayor Taveras' State of the City Address.