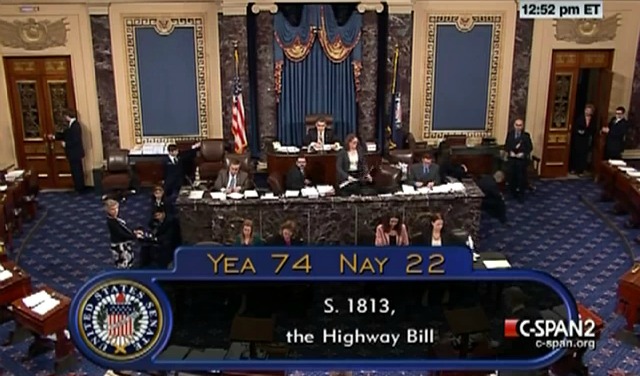 Yesterday, the United States Senate passed a two-year, $109 billion transportation bill on a bi-partisan vote of 74 to 22. The bill is set to move to the House of Representatives where House Speaker John Boehner (R-Ohio) has been unable to muster support for a 5-year bill that everyone from transportation activists, to Republican Representatives in urban districts, and Sec. of Transportation Ray LaHood panned as a giant step backwards in transportation planning and funding.

While the House bill was widely panned, the Senate bill passed yesterday is finding broad support:

In a press release, Sen. Jack Reed explains what the Transportation Bill potentially means for Rhode Island, that is if the House passes it relatively intact (a big ‘if’ at this point), and it makes it to the President’s desk for signature. Reed states the bill will, “provide Rhode Island with $515 million for transportation enhancements, protect mass-transit, and streamline the review process so local projects can move faster while creating a new set of performance requirements aimed at preventing waste and making sure national goals are met.”

The Rhode Island Department of Transportation (RIDOT) is projected to receive an average of $227 million a year for highways, roads, and bridges. Last year the state received $226.9 million. Rhode Island will continue to receive more than $3 in federal funding for every dollar paid in federal gas taxes.

Reed also helped author a key portion of the bill that will provide Rhode Island over $30.5 million in federal mass transit funding in 2012, an increase of more than 10% ($3.7 million) over last year.

The Senator’s press release stated that the House bill, “would have reduced Rhode Island’s average annual highway investment by $46 million a year and devastated public transportation by nearly $7 million a year,” he referred to that as a “non-starter.”

Transit funding, the waterfront, and more in today's News & Notes.

Get your stimulus on (or not)

Stimulus, Stimulus, Stimulus!!! My email’s been jammed with all manner of Senate Stimulus information. I’ve had no time to digest it all so excuse me while I throw a few things against the wall here and...