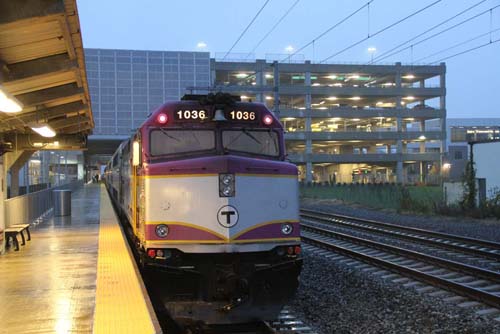 The biggest gripe about the Interlink service since it started last December has been the timing of the trains. Few people have been able to take advantage of the train service to connect to flights at the airport. The initial service was always set to increase once the station at Wickford Junction came online and initial service was more catered to commuters heading to Boston than to people needing to reach the airport. Wickford Junction station is slated to come online sometime in April (it is currently ahead of schedule!); this early boost in T.F. Green service is welcome news.

T.F. Green service will increase from its current 11 weekday trips to 20.

The new schedule (including some changes at other stations) is available on the MBTA website [.pdf]

Parking at the InterLink garage is $6.75 for the first 24 hours. Customers parking beyond 24 hours will incur an additional charge of $30 per day. The monthly commuter parking rate is currently $110 per month. To celebrate the increased service schedule, the monthly rate will be reduced to $95 per month, effective December 1, 2011. Cash and credit cards are accepted.

Also last week, the City of Warwick outlined its intentions to encourage Transit Oriented Development in the area around the Interlink, including enhancements for pedestrians and cyclists.

When it comes to a transit oriented development, [Warwick City Planner William] DePasquale sees incorporating pedestrian traffic and bicycles. A goal of the project, as described in a scope of work prepared last month, is to integrate the Interlink connecting the airport and Amtrak with mixed-income residential, office, hotel, retail and other uses. An objective is to “encourage and attract complimentary public and private investment” that is “supportive of livability and walkability at major transportation facilities.”

DePasquale sees the center as a “gateway for the region” and a destination where people would want to come, rather than just pass through on their way to someplace else. The core to this center, which is about 35 acres on both sides of the Interlink skywalk, is where attention is being focused.

Do you want more Interlink news? Well good, today the Rhode Island State Council on the Arts announced that it is seeking applicants from artists to display in the “Green Space” in the Interlink.

GREEN SPACE, a newly created exhibition space located at TF Green Airport, seeks work for presentation in 2012. Green Space is a partnership between RISCA and the Rhode Island Airport Corporation that promotes outstanding work by artists living and working in Rhode Island. The space will present art to an ever-changing audience of local, national and international travelers. It will exhibit three group shows in 2012.

For realz this time. Commuter rail to T.F. Green Dec. 6

Photo (cc) Mr. Ducke It is not a trick, RIDOT issued a press release and everything. Commuter Rail service to T.F. Green starts on December 6th. Trains will depart from T.F. Green, inbound to Providence/South Station...