Lucchino, one of the team’s new owners, said the project is a clear economic engine for the local economy, and not just through baseball.

“We have to build a ballpark that has multiple uses, that can attract football and could attract concerts, that can have some art events at the thing,” he said. “Make it an major civic center for Providence.”

Lucchino believes the new park will not only boost the economy, but also revitalize downtown Providence. He hopes to bring a million people to the capital city by generating small businesses and jobs.

PBN: Pawsox greeted by skeptical I-195 commission and audience

Owners of the Pawtucket Red Sox presented a detailed plan for moving the AAA team to downtown Providence Monday, earning a skeptical if not critical reception from the commission that controls the site the team wants for its new ballpark.

In questions posed during the meeting of the Interstate 195 Redevelopment District Commission, commissioners questioned both the public cost and the tax benefits of the proposed development, and whether the state could find a more effective use for the site to attract highly desirable high-tech or life sciences development to the I-195 lands.

The question of other uses seems odd, so far as I know we still haven’t found a way out of the federal requirement for park land at this location.

Representatives and embers of the RI Tea Party, The Republican Party, the Progressive Democrats of Rhode Island, The Green Party, Direct Action for Rights and Equality, Occupy Providence, The Rhode Island Sierra Club, RI Taxpayers, The Rhode Island Libertarian Party, and the Capital Good Fund stood side by side to take a stand against corporate welfare.

Visit the link to see videos of speakers.

After the first public meeting Monday about the PawSox owners’ proposal to build a stadium in Providence, Rhode Island Commerce Secretary Stefan Pryor and I-195 Commission Chairman Joseph F. Azrack said state leaders must craft a deal more “appropriately balanced” and more fair for taxpayers if the project is to move forward.

“The financial arrangement that is proposed by the team’s ownership involves a substantial public investment, yet the proceeds for profits from the stadium primarily return to the owners,” Pryor said. “The important question to ask is whether there might be an alternative financial arrangement that might be more fair and might enable taxpayers to feel less of the burden.”

The new PawSox owners’ first stadium proposal is dead. Will a revised one have more success?

That was the question of the hour late Monday after Gov. Gina Raimondo and her top aides poured cold water on a request from new Pawtucket Red Sox President Jim Skeffington for $120 million in taxpayer subsidies and free downtown land to build the AAA team a new stadium.

“From what I understand of the owners’ initial proposal, it appears that Rhode Island taxpayers would pay most, if not all of the cost of building the new stadium, yet the owners would stand to receive all of the profits,” Raimondo said in a statement Monday evening. “That isn’t fair for Rhode Islanders.”

The owner of the Victory Place parcel near Davol Square, JAG Investment Realty, on Tuesday suggested the site as an alternative location for creating a stadium for the Pawtucket Red Sox.

“JAG Investment Realty strongly believes that keeping the PawSox in Rhode Island and building a ballpark in Providence is an extremely important endeavor,” said a company spokesman, Bill Fischer. “We are also respectful of the new ownership team led by Mr. Skeffington and their current plan and understand our location is not their first choice. That said, we also want it to be known that there is a highly qualified alternate location in Providence in the event that the current site does not meet final approval for any reason.” 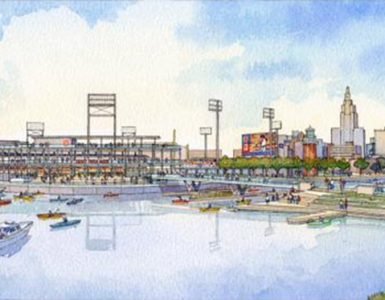 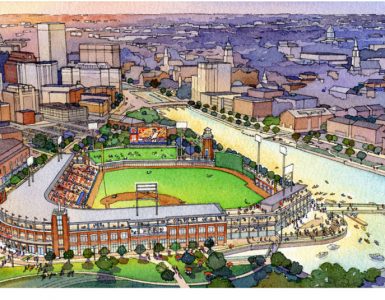