Anyone know what is going on here at Saki’s on Weybosset Street?

Way back in 2004, the owner of Saki’s, Dionisios P. “Dennis” Sampalis, was interviewed by the Journal about his plans to expand Saki’s to a full service restaurant and create 15 apartments above the restaurant (archived Journal article and discussion at UrbanPlanet).

The oldest structure in Downcity, which houses Saki’s Pizza House on Weybosset Street, would be rehabilitated and its upper floors converted to apartments in a project sponsored by the proprietor of Saki’s.

The $3-million plan would upgrade Saki’s from an unpretentious pizzeria that caters to a sometimes raucous late-night bar crowd to what proprietor Dionisios P. “Dennis” Sampalis describes as a Greek/Mediterranean restaurant comparable to Pizzeria Uno.

According to the article preliminary approvals had been granted by DRC for the project back in 2004 and some interior demolition had been done to the upper floors. Some steps to fund the project were also underway in 2004. Since the summer of 2004 though, there has not been much evidence of any work being done, until now.

Pseudo_Work on UrbanPlanet shared some of the historical significance of the building, known as the Dyer Block:

The building is actually a little more important than just being pretty, and particularly old. It was built by John Holden Greene, a RI born architect who eventually became very influential in the first half of the 19th century. He also built at least one other federal house in what is now downtown, which was moved to Chestnut Street from Weybosset and restored in the 1960s, as well as the First Unitarian Church on Benefit Street in 1816 for the oldest unitarian congregation in the US, founded in 1720. He also built a nearly identical church (episcopal) in Savannah, GA a few years later.

The Dyer block (Saki’s) was a federal row house, and therefore important for 2 other reasons: 1) it’s one of the few remaining artifacts from a time period before downtown developed into a retail district (the custom house is another, and the downcity diner building, aka Second Universalist Church was a 3rd), and 2) it is the only row house that John Holden Greene ever built. The whole upscale trend of the city recently doesn’t always sit well with me, but I’m glad some ideas are being thrown around about how to keep this building in use, because it’s a very important one.

If anyone knows what the current plans are for the building, and what work is prompting the scaffold erection please let us know. 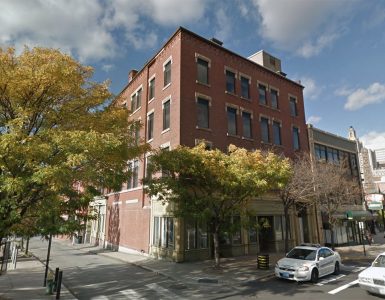 PBN: Providence office building on Weybosset under conversion to apartments

A four-story downtown office building near Johnson & Wales University is being converted to apartments and retail space.