Video: Rails to Rubber the removal of Seattle’s streetcars in 1940

This 1940 film tells the story of the removal of Seattle’s streetcars in favor of buses and trackless trolleys, rail to rubber. Flashforward 60 years and the city is putting streetcars back. 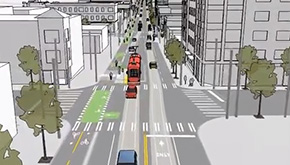 This video shows the Broadway Corridor of Seattle's First Hill Streetcar project. What roads in Providence could you see done up in a similar fashion?