If we’re going to redesign Providence Station, let’s do it right 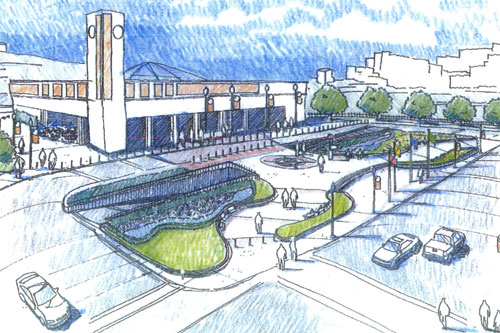 Recently, RIDOT received $3 million dollars in Federal high speed rail funds for renovations at Providence Station. Among the items that money is set to be spent on is renovations and repairs to the exterior of the station.

We’ve received plans for those renovations and were less than thrilled. 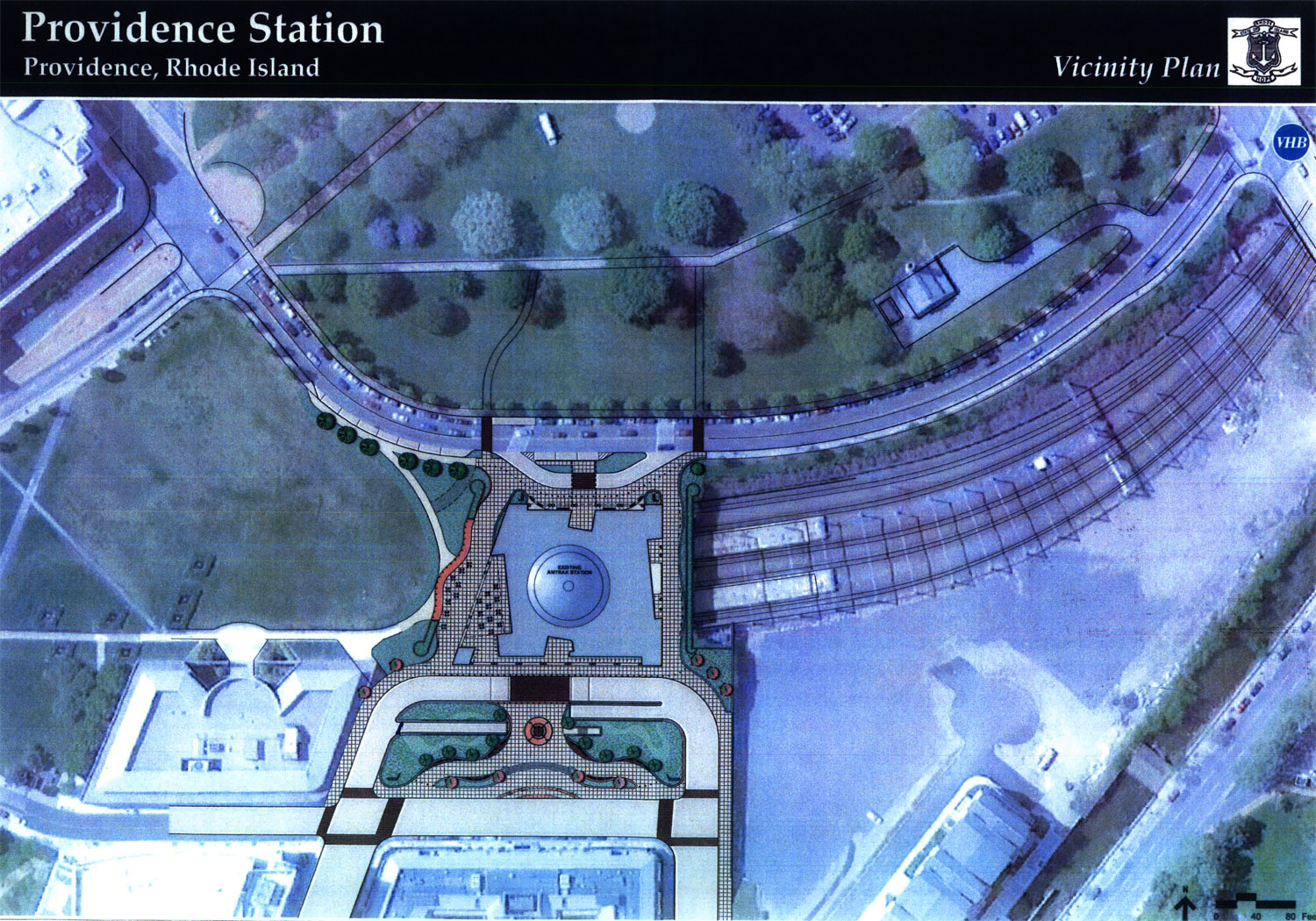 Providence Station is 26-years-old. Lack of routine maintenance aside, when buildings are approaching their 30th birthday, it often is time for renovations, and those renovations offer a chance to reassess the building, to make changes to bring it into line with conditions that weren’t present when the building was constructed.

In 1986, when Providence Station opened, rail travel was on the wane. Gas cost 93¢ per gallon, the MBTA did not serve Providence, there was no Amtrak Acela service, Capital Center was still on the drawing board, and no one was talking about streetcars in Providence. Basically it was built because cities are supposed to have train stations.

Now the MBTA has 16 daily roundtrips through Providence and we’re close to opening our second station south of the city, gas is pushing $4.00 per gallon, the Northeast Corridor is the heart of the Amtrak system, thousands of people live and work in Capital Center, and a streetcar is a real possibility.

Of course here we go on and on about Providence Station. Unfortunately, $3 million is not going to get us very far. However, we can ensure that we spend that $3 million in the best way we can and also ensure that any improvements we make now don’t need to be pulled out when we have more funds in the future to make further improvements.

When we take a look at what is planned, well, it’s all kind of silly really. 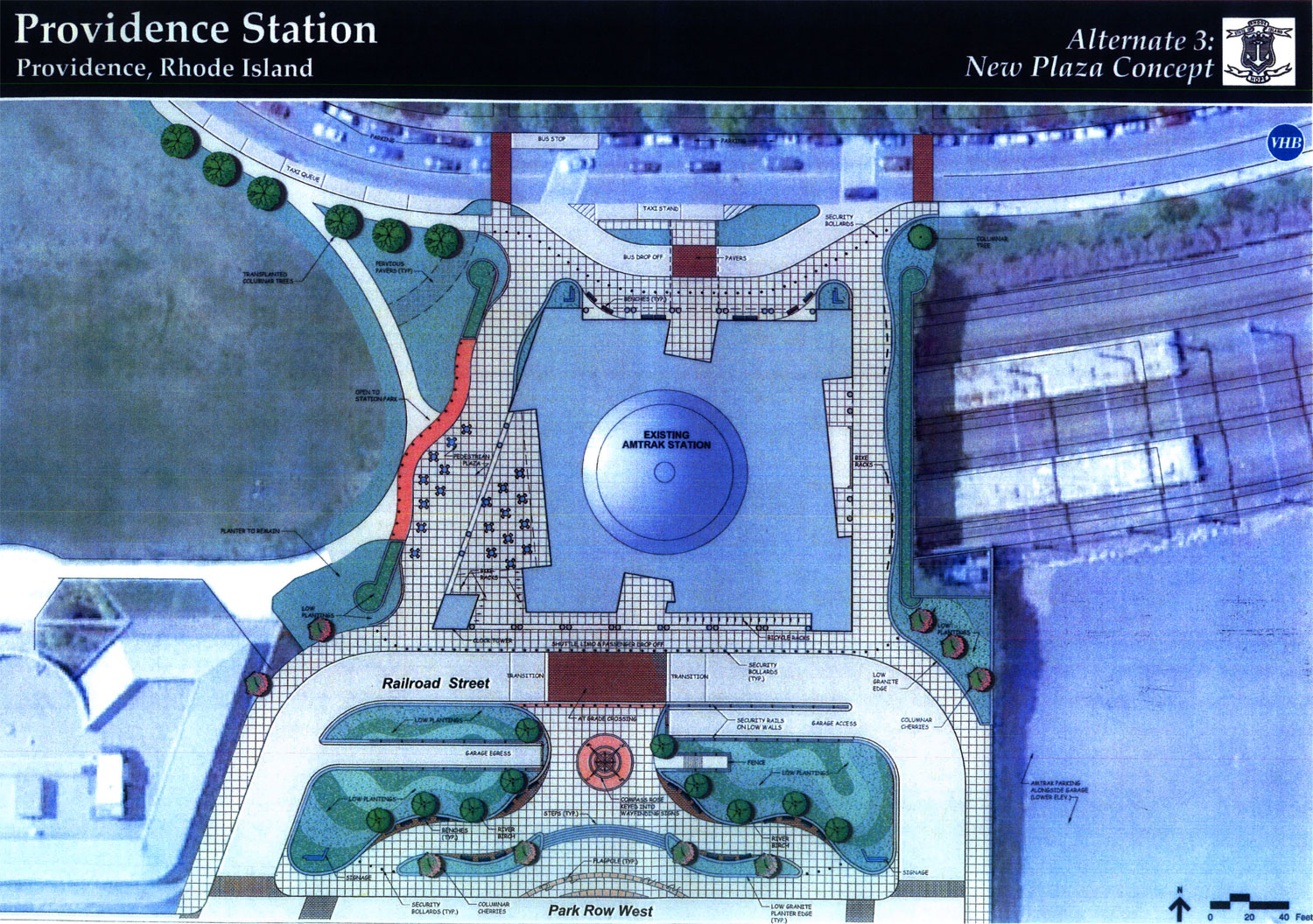 There’s some nice things, more bike racks, more landscaping, a raised crosswalk at the drop off lane, direct walkways to the State House. But there’s no plan for through-routing local transportation at the station. 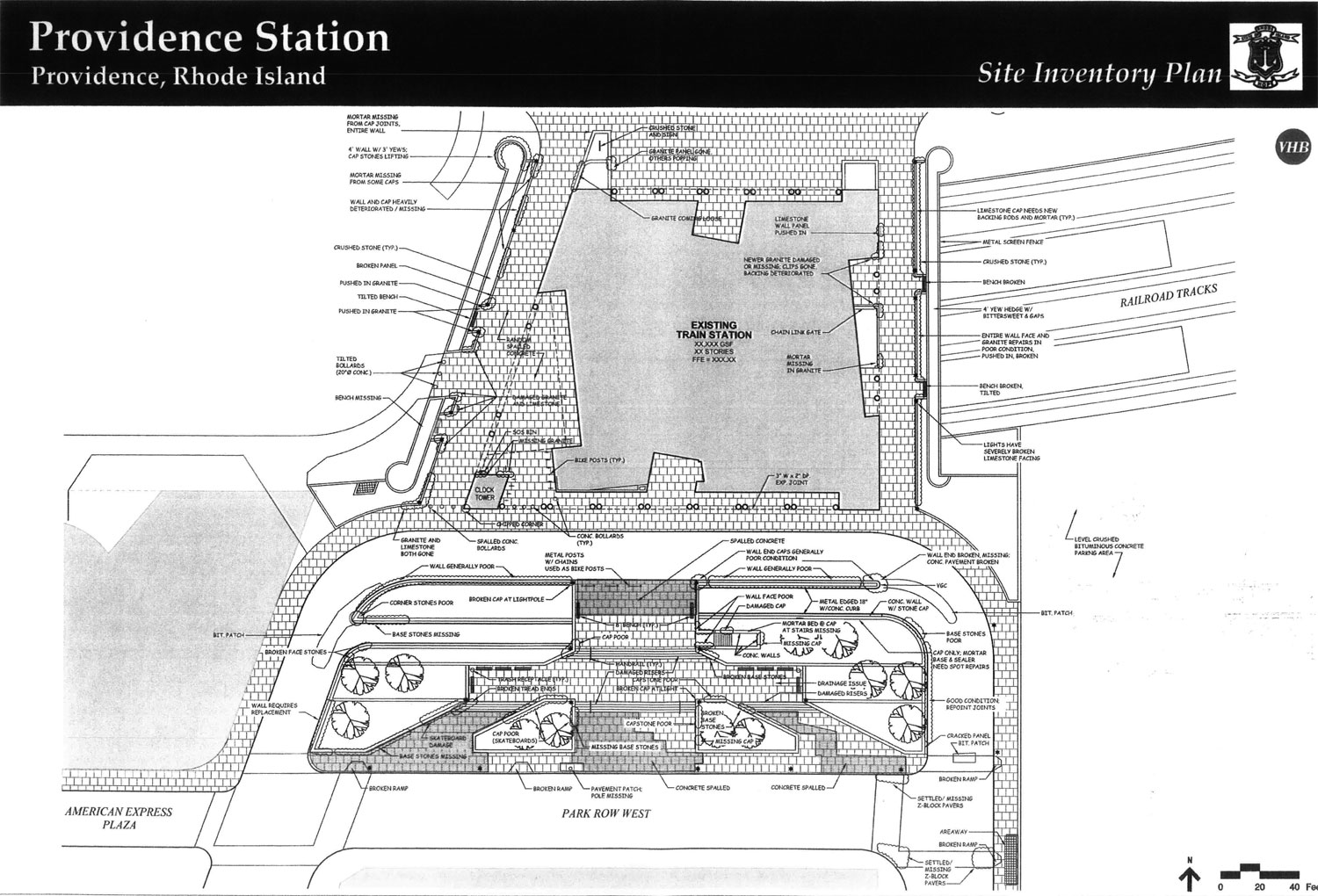 The plan calls for local buses that serve areas north of the station such as Smith Street and Douglas Avenue to continue to operate via Gaspee Street, on the far side of the station from Downcity. Most buses from Kennedy Plaza go up Exchange to Memorial to Francis to Gaspee. This is a silly circuitous route and most people can walk directly up Exchange Street to the train station faster, especially at rush hour when Memorial Boulevard is a parking lot, when most people are heading to the train station.

There would be room for the Gold Line Trolley to be extended from its current terminus at Kennedy Plaza, up Exchange, around the Avalon Apartments and to the city side of the station, where it would then head back to Kennedy Plaza. This sets up a situation where one gets off a train, comes upstairs, then has to decide if they should go out the city side and wait for the gold line, or go out the State House side and wait for one of the buses (or walk to Kennedy Plaza because, that’s probably going to get you there fastest).

Of course, we’ve talked about this before, the way to solve this is to extend Exchange Street beside the station and connect it to Gaspee Street as a transitway. Then all buses to and from Kennedy Plaza and to points north of the train station would arrive predictably at the same place, service would be direct, and the stage would be set for a future streetcar connection to, through, and north of the station. 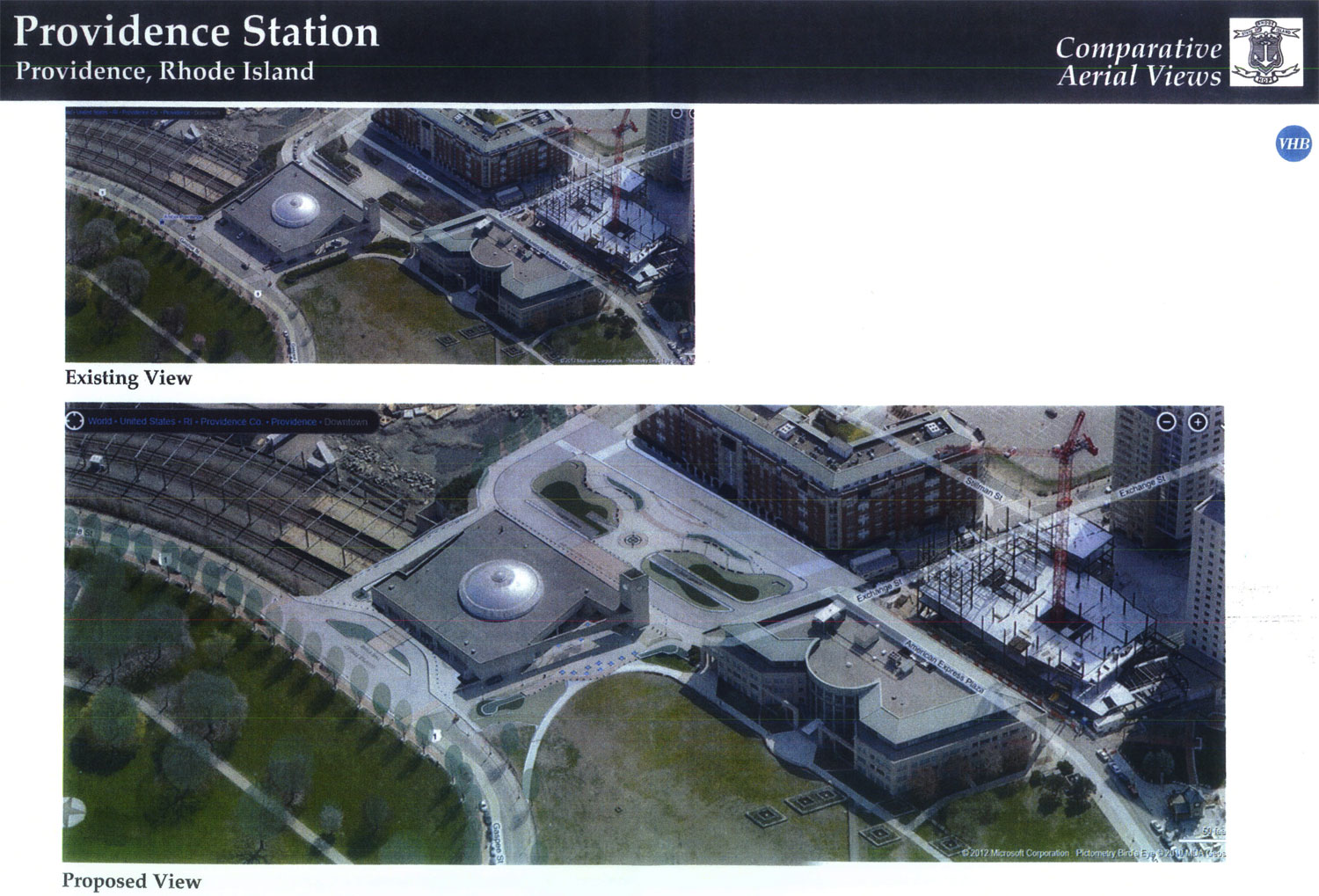 We still have that limited $3 million budget to think about. With all the work that needs doing inside and outside the station, $3 million might not get us to being able to afford that connection, I think it should be a priority in any plan to renovate the station, but if the money is not there, let us not do anything to prevent it in the future when we have more funds.

There are other issues with this plan though, it is not visionary, and it is not urban. Remember 1986 and its 93¢ gas and the remoteness of the idea that there’d ever be a huge passenger base at the station? Well it is 2012 and 1986 was wrong, there is demand. Maybe some sad plantings and some benches scattered about worked in 1986, in 2012 we need a station that people use, we need an urban station. The plan is all mall style pavers, curved planters, flag poles, banners slapped on the building, and random cafe tables. There’s no thought for retail, where does a hypothetical Friday afternoon farmers market go in this plan, where are the food trucks, where is the seating for the hundreds of people who use this station now and the thousands that will be using it years to come, where’s the covered secure bike parking? 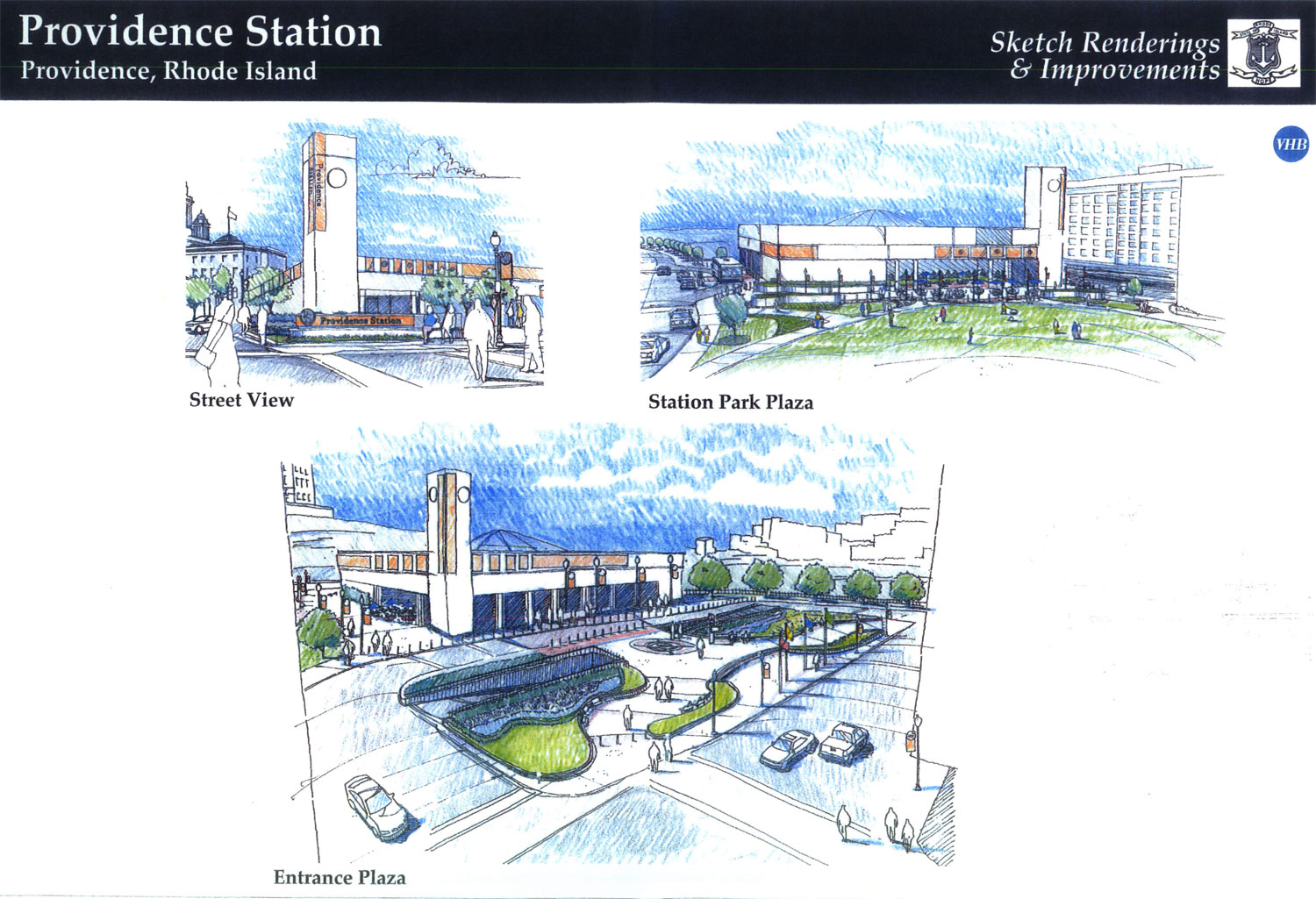 This plan is nothing more than ripping out what has failed to be maintained since 1986 and replacing it more ticky tacky, insipid, suburban inspired dreck that will again not be maintained. And no one will care that it is not maintained because it will only ever be used by people moving as fast as they can through it because there is no there, there.

In 1986 when we built a station because it simply seemed like a thing a city needed to have, we were on to something. A city does need to have a train station, but a vital city needs that train station to be one of its great public venues, it should be one of the beating hearts of the city. Let’s not screw this up, because the Federal Government does not hand us $3 million for these type of things every day. 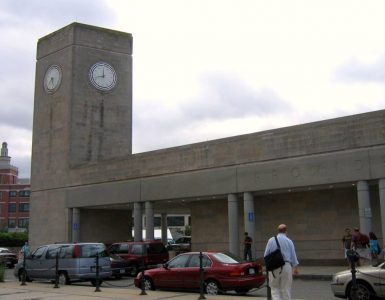 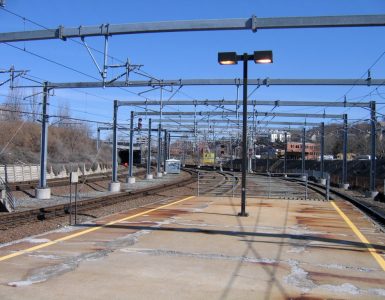 In a joint application for a federal grant to advance planning for the “Providence Station Transit Center,” RIPTA and RIDOT highlighted how 15 acres of undeveloped land sit right next to the train depot.