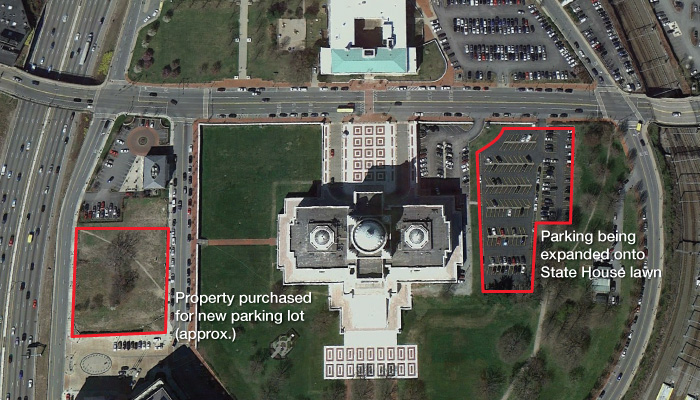 ecoRI reports that the Department of Administration (DOA) has already started work on expanding the Assembly Members parking lot on the State House grounds. “Work on the two tiers of new parking to the east of the Statehouse, along Smith Street, will replace 2,000 square feet of grass with some 40 parking spaces.”

Meanwhile, as we discussed in July, the DOA has spent $3.1 million purchasing property along Francis Street next to the Veterans Memorial Auditorium for even more surface parking.

The Chairman of the Capital Center Commission, Deming Sherman is none to happy about all this. Sherman told The Providence Journal that there should be less parking around the State House, not more and that a parking garage should be built behind the DOA building.

Go ahead, read that again, Governor Chafee appointed the guy who proposed building more surface parking on the State House lawn to be the state preservation officer. I’ll wait while you clean up your exploded brain.

Wait, also, this all might violate our 1982 agreement with the Feds giving us the money to move the railroad tracks and river and create Capital Center and… Capital Properties, the company that owns and master leases most of the property in Capital Center is wondering why they’re abiding by the agreements made like a bunch of chumps while the State contends they can do whatever they want.

What are you gonna do Mr. Speaker? 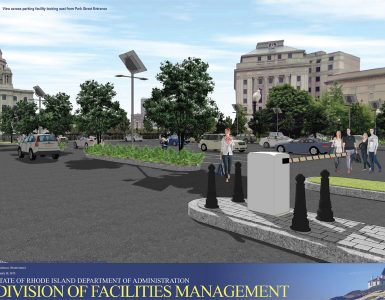 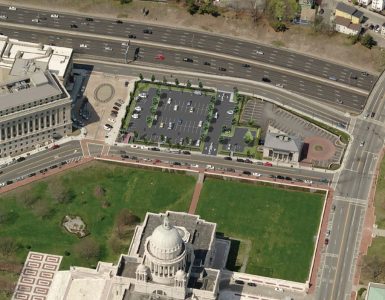 My understanding is that the State is still insisting they are not beholden to the Capital Center Commission and can do whatever-the-fuck they want (State of Rhode Island to Providence: "Drop dead") and this meeting is...