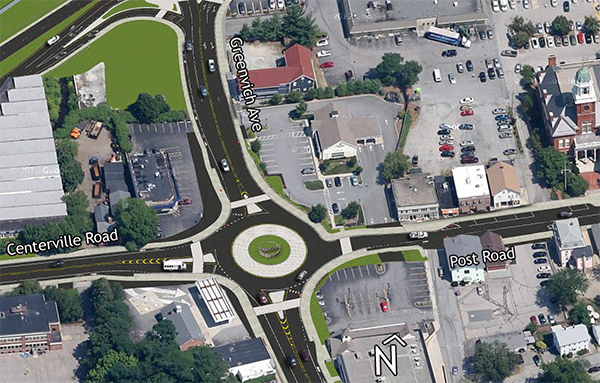 The Providence streetcar project is not the only TIGER grant application coming from Rhode Island. RIDOT has also submitted an application for the Apponaug Circulator Long-term Improvements Project .

The Mayor has thrown his support behind the streetcar however the Governor (former Mayor of Warwick) is not on board, saying through a spokesperson to WPRI that the streetcar project is, “not ready to go.”

I contend that it is the Apponaug project is not ready to go, here’s why:

The current circulator project seeks to relieve problems cause by heavy through traffic and fix “numerous roadway deficiencies [that] exist along all legs the circulator, including narrow lane widths, narrow or nonexistent shoulder widths, insufficient horizontal curves, poor curb reveal, and poorly defined curb openings.” At the same time, it seeks to improve the environment for area businesses, pedestrians, and cyclists.

These wide lanes, wide shoulders, broad curves, and etc. are exactly what make a village center environment such as Apponaug a poor place for pedestrians and cyclists and by extension, a poor place to run a business. This kind of engineering perpetuates the high-speed movement of automobiles and will not help get pass-through traffic to stop and patronize area businesses.

Basically, these conditions extend the road environment of the Post Road Extension straight through Apponaug.

While the plan calls for reducing the section of Post Road between Four Corners and Williams Corner, the main historic business district, to one lane and installing curb extensions leading to raised crosswalks through that section, the rest of the roadways through the project feature four-lane arterials with wide shoulders; not an ideal environment for pedestrians.

The project features four roundabouts and one tear-shaped not quite roundabout at Williams Corner. While the proposal claims that, “A key characteristic of roundabouts is their ability to handle pedestrian crossings safely,” I’m dubious about the safety of pedestrians in any roundabout that has two-lanes of high-speed traffic moving in each direction. ‘Yield to pedestrians’ and speed limit signs can be put up all over the place, but traffic will move at the speed the road is engineered to allow it to move at.

The business district portion has good pedestrian enhancements, the rest of the project area is not ideal and continues to cut pedestrians off from the surrounding areas.

The section of Post Road through the Business District which is getting the good pedestrian enhancements also has a bike lane. A one-way bike lane from Four Corners to Williams Corner. So one could put their bike on their car, drive to Four Corners, and ride it to Williams Corner, but they would not be able to ride their bike back to their car as there is no other bicycle infrastructure to make the return trip, or a trip anywhere else. Oh wait, RIDOT actually says that the remaining roadways will have “bicycle tolerant shoulders,” also known as glass and road salt storage basins. Yay!

The City of Warwick hopes to make the area around the Airport and the Interlink into a new business district, bike lanes along Jefferson Blvd. to Post Road and through Apponaug would be a worthy and inexpensive investment for this, especially as Apponaug is planned to be completely rebuilt now. Why stop at “bicycle tolerant shoulders” when a couple more feet of pavement could result in real bike lanes and cycle tracks.

The plan calls for the construction of a new bypass road, and extension of Veterans Memorial Drive from that road’s intersection with Greenwich Ave./Route 5 to the intersection of Centerville Road/Route 117 and Toll Gate Road/Route 115. This bypass will feed traffic directly from the Post Road Extension to Centerville and Toll Gate Roads without traffic having to go through Apponaug.

There’s a number of problems with this. First, if Greenwich Ave. north of Four Corners and Veterans Memorial Drive each become two-way roads, then they in effect become the bypass of Apponaug, so we’re building a bypass of a bypass? Sure, traffic from the west still has to contend with Four Corners, but that is supposed to be solved with the construction of the roundabout at that location.

Furthermore, if we’re encouraging all traffic to bypass the Apponaug Business District (at least the historic heart of it along Post Road), then how does that help the local businesses, one of the stated goals of the project. Taking the passing traffic and moving it away so it doesn’t know you’re there seems less than helpful.

For a real world example of what a bypassed business district looks like, see Buzzards Bay, Massachusetts.

For generations, the Main Street in Buzzards Bay was the way people from points south and west (New Yorkers mainly) reached Cape Cod. In the late 1980’s Route 25 was completed connecting I-495 to the base of the Bourne Bridge. All the traffic in Buzzards Bay went away, the business dried up, and town fathers have been trying to revitalize the area ever since.

A large part of the Circulator proposal deals with area storm water runoff. The bypass road is set to be routed through the site of an old mill complex where a stretch of the Apponaug River has been culverted under ground (historically this provided power to the mills). The site of this former mill is subjected to flooding, restoration of the Apponaug River and other wetlands restoration will mitigate that.

However, building the bypass road creates more impervious surface that the restoration efforts will have to mitigate. Not building the bypass and allowing the mill site to become open space will help reduce the amount of runoff that needs to be dealt with, while also creating open space for area residents, business customers, and wildlife to enjoy.

6. If you build it, they will come

If traffic counts remained the same, then yes, moving that traffic more efficiently with less stopping would reduce emissions, idling cars not moving are doing nothing but spewing toxins into the air.

However, it is shown time and again, that if you increase traffic flow and mitigate congestion, more traffic will come to fill that new capacity, we call this induced demand. When people find out the traffic at Four Corners is moving better, people who currently find ways to avoid the area will change their behaviors and use the roadway, increasing traffic counts and erasing air quality gains.

The lack of adequate bike infrastructure and no planing for public transit (the word RIPTA does not appear in the proposal), mean that Apponaug will continue to be a primarily automobile dominated environment. If the current traffic volume is inadequate to support local businesses, and helping local businesses is one of the justifications for the plan, then we will need more cars coming to the area if we hope to see more patrons for those businesses.

If this proposal were on its own in a vacuum, I would still say it is not ready yet do to all the reasons listed above. But this also happens to be in direct competition with Providence’s application for TIGER funds for the streetcar. For the Governor to say that the streetcar is not ready but insist that this is, pits city vs. suburb.

The current condition of Apponaug is a problem, and it needs fixing, but RIDOT is trying to engineer their way out of a traffic problem by adding capacity and building road geometries to increase speed and through-put of cars, a decidedly suburban solution to the issues at hand. In truth, Apponaug is a little tiny urban remnant destroyed by prioritization of the automobile above place. This area needs an urban solution.

I look at this proposal and I see shades of America’s Cup Blvd. in Newport, a 20th century mistake that city is trying to undo.

As we have a situation now where this project is pitted against the streetcar, we have to compare returns on investment. The streetcar is set to be a catalyst for development in the capital city of our state.

The Apponaug project’s economic advantages are, “Significant benefits in travel time and reliability cost savings, with the bypass and related improvements being critical to the economic revitalization of the Apponaug Business District, a long-declining urban center and key transportation node in the Economically Distressed region.”

Apponaug needs help, but pitting a small suburban village in a declining city versus the economic impact development in Providence has on the entire state is foolhardy. As far as these federal funds go, this is an either/or proposition. There are $474 million in TIGER funding available, and there have been $9 billion (with a ‘B’) in requests. It is unfortunate that our Governor insists this project is the one that’s ready and creates the appearance of discord within the state, endangering our chances of receiving any TIGER funds.

Gov. Chafee, who supports Apponaug’s bid (who is also the former Mayor of Warwick, in case he let you forget) will almost certainly be facing Mayor Taveras in the Democratic Primary for Governor next fall. Is the Governor ceding Providence to the Mayor and going for the suburban vote by supporting a road building project in the suburbs over a public transit project in the City? Is the Governor supporting this project to deny the Mayor a big win with the streetcar before they face off? Maybe?

The streetcar project is the potential nexus of an entire streetcar system. When then Mayor Cicilline proposed it, he had a vision for streetcars criss-crossing the region and extending into neighboring cities (even Warwick). The Apponaug project..? That’s it, there is no phase II, it is not the embryo of a larger economic and transportation plan.

In my opinion, as it stands now, the Apponaug project is not ready to go. 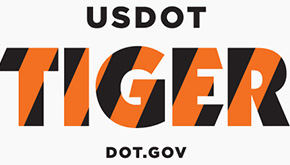