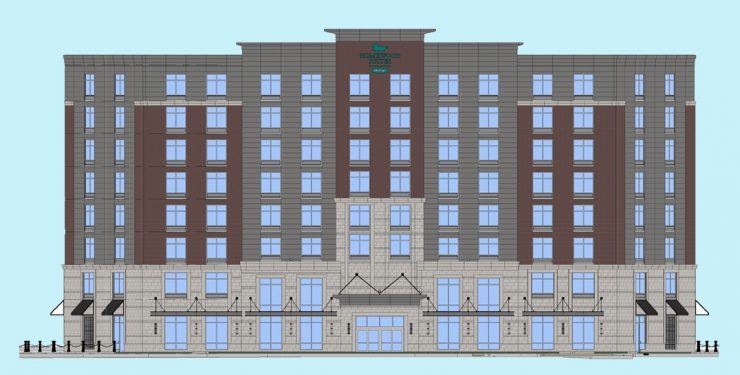 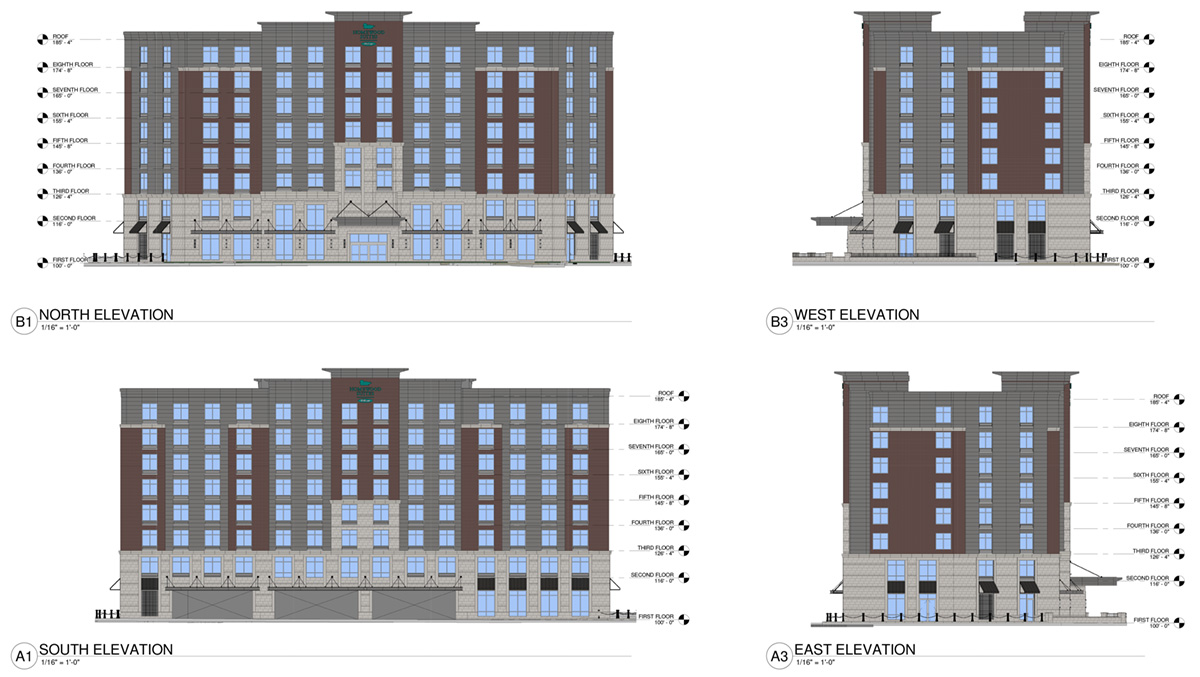 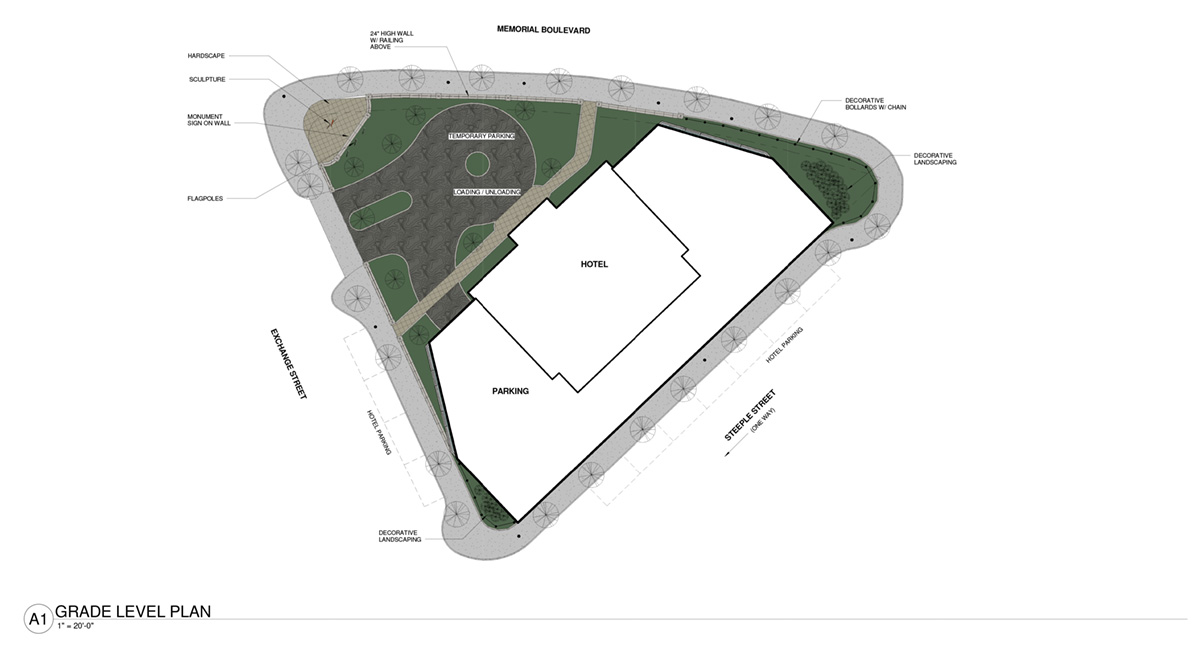 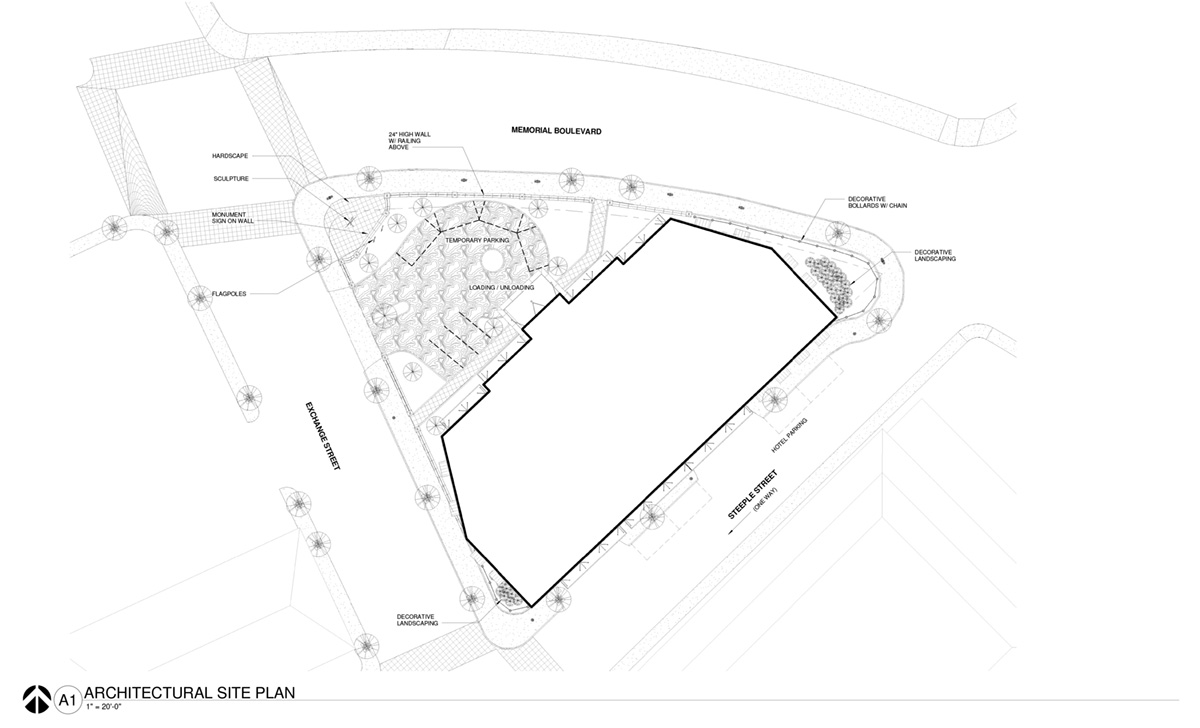 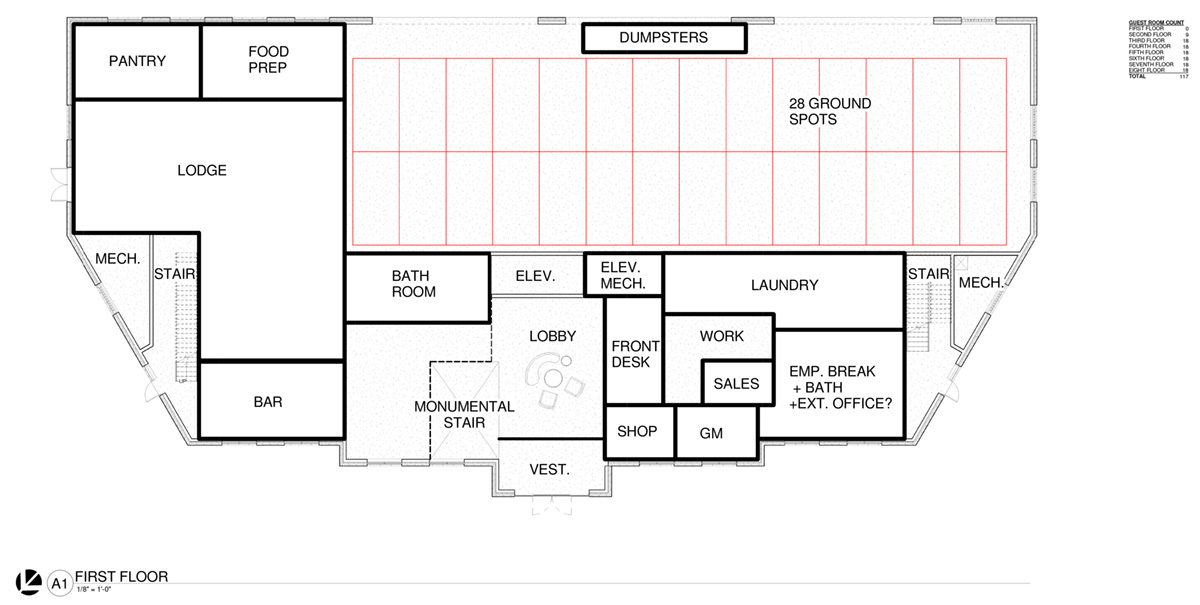 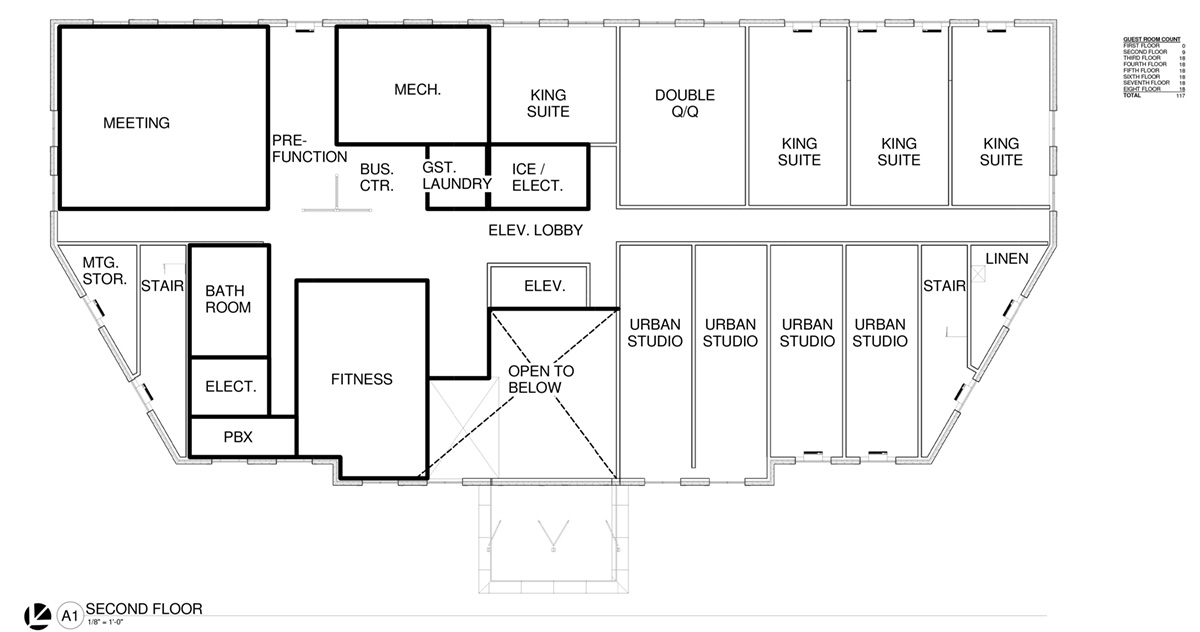 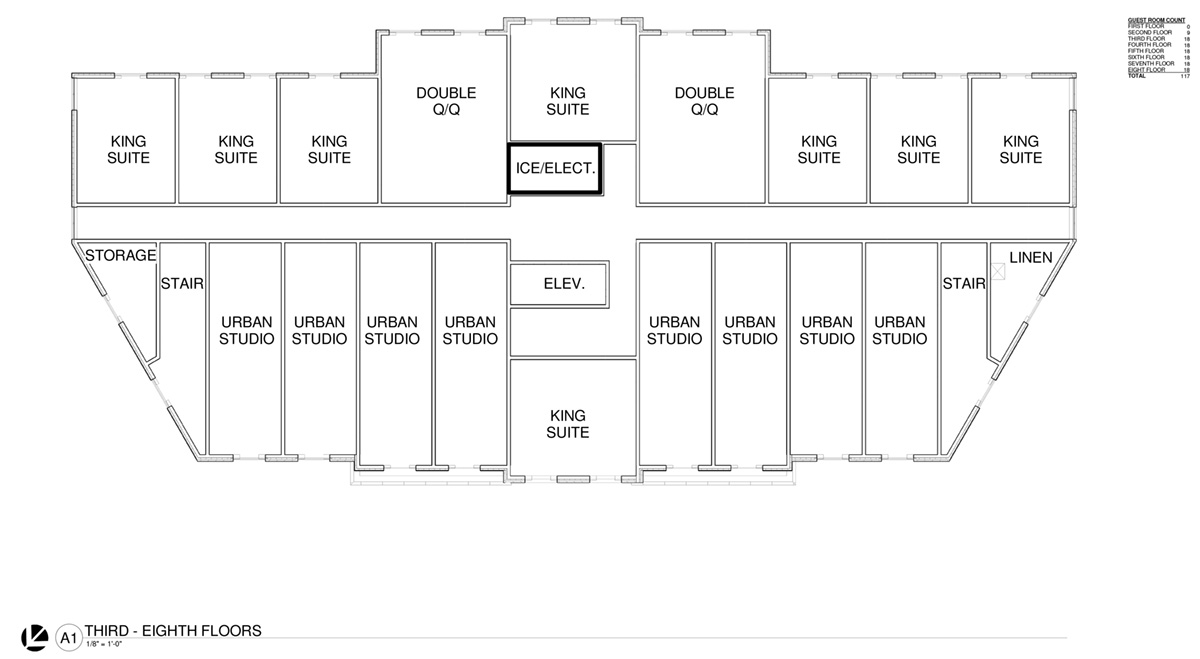 Plan is for 117 units on 8 floors. Design is by BMA Architecture Group of New Hampshire.

The Capital Center Commission Design Review Committee will be reviewing this project at their June 16th meeting.

[alert type=”success”] Download original plan images in larger format [/alert] [alert type=”muted”]I had some drinks, took an antacid, got some sleep, and gave some thought to this proposal. I posted my thoughts in a comment below, reproduced here for those who don’t read the comments (I understand if you don’t, comments can be scary).[/alert] 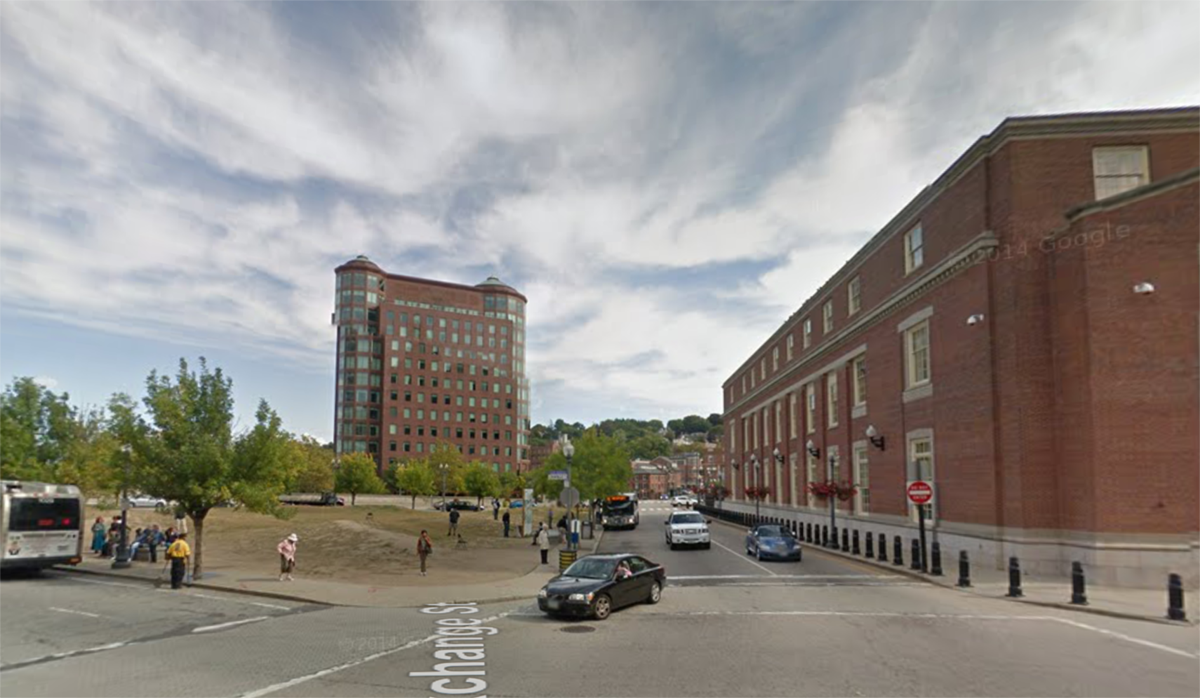 The building should sit on a pedestal that is as tall as the Federal Building across the street and fills the whole block. The tower can then grow out of that. A building, at least with this use, cannot be a tower that fills the entire parcel, the center of the building would be trapped without windows and useless to a hotel or residential building, not ideal for an office building either really. In a larger city a 20 or 30 story tower may grow whole out of the parcel and step back as it rises, but we wouldn’t be able to tenant a building of that scale in Providence.

The driveway should be a non-starter, surface parking is not an approved use in Capital Center, and even a so-called temporary lot should not be allowed. The hotel could take all the frontage on Steeple Street to use for temporary guest parking, the way Hotel Providence does or the Biltmore (the Biltmore having a traffic island separating it’s drive from the street). If they want to have parking within the building, they could have an entrance for that around the corner on Exchange Street.

Guests would pull up on Steeple, the valet would take their car and drive it around the corner to the garage spaces or another facility.

The service entrance can also use this garage entrance, they should not need, nor should they be allowed, a block long wall of garage doors on any side of this building. A small garage entrance on Exchange would allow for the rest of the Exchange facade to be activated with retail uses.

Their plans call for a bar and a gift shop, and I’m assuming the “Lodge” is a restaurant as it is flanked by a pantry and food prep. All of these uses could be along the Exchange facade with openings onto the street as well as into the lobby.

The second floor of the pedestal could be occupied with their proposed meeting space, fitness center, mechanicals, back of house operations, and perhaps leasable space to third parties (a second restaurant over-looking Burnside Park or Waterplace).

The tower would then grow out of the pedestal with the guest rooms within it.

Their proposed tower along Steeple is I assume because Steeple looks to be the longest edge on the triangle. I’d prefer to see the tower rise up along Memorial. It would be a straight edge against the curve in Memorial, but I think that would work fine. Having the tower against Memorial creates a sort of canyon relationship with the Citizens building across the street.

As for activating the street level, I think Exchange is the most important to be activated. It is the main walkway from the train station to Kennedy Plaza and the rest of Downtown so it potentially has high pedestrian volume. There are retail spaces further down the street at Waterplace meaning it has potential to become a larger retail street. Union Station across the street has potential with the existing building and the parking lot for future development to bring more retail. Having retail on both sides of the street is important to making a healthy walkable retail area.

The Steeple side has the Federal Building across the street which will never have retail storefronts, meaning any retail in the hotel would be one sided and less than ideal. The entrance to the hotel is well suited to this area. The ground floor should have lots of glass so people walking by can see activity within.

Memorial has almost zero foot traffic, people walk across Memorial, not along it. I don’t think we’ll ever see retail development anywhere along Memorial and it also has the one sided problem with the river preventing retail on the other side. I don’t think it is necessarily a tragedy that Memorial will never have retail as long as the crossings between Waterplace and downtown are well built and well retailed.

On design, the building is a cookie-cutter, copy-and-paste, there’s no design there. The developer should not expect that what flies on interstate off-ramps will fly in Downtown Providence. If they want to be here, they need to step up their game and not just present us with a poop on a plate. Providence should stop being afraid to say no.

This need not be the end-all and be-all of architecture, the developer need not hire the world’s top starchitects. But they do need to hire someone who knows how to work in something other than dryvit.

The architect chosen seems to do a lot of this corporate box work, there are a few small glimmers on their website of some better work that they have done when freed from the shackles of corporate box design. Perhaps they could be teamed with a local architect who could help them translate the architectural vernacular of Providence into something the client can agree with.

Personally, I’m not sure what the pedestal should look like, but I’d love to see a nice glassy tower grow out of it, maybe a little slimmer but going to 10 floors instead of 8… 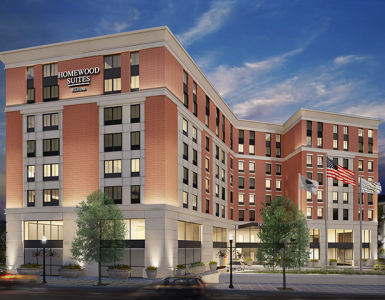 Construction may begin this summer on an extended-stay hotel on a vacant, triangular lot in Providence’s Capital Center Commission district because the Rhode Island Commerce Corporation agreed Monday night to give the... 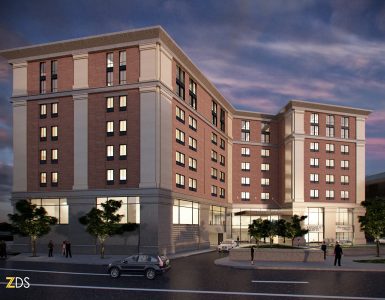