Ted Nesi reports for Providence Business News about how Massachusetts State Treasurer Timothy Cahill and Governor Deval Patrick are not seeing eye to eye on funding for restoration of Commuter Rail service to New Bedford and Fall River.

Cahill, who may make a primary challenge against the governor next year, says there is no way, in the current economic climate that the Commonwealth can fund the $1.6 billion project. The only way he sees it being built is with federal money, and the Feds, he claims, are not to eager to give a post-Big Dig Bay State any more money. Cahill’s basic claim is that Patrick made promises to South Coast voters to get elected, and Cahill claims to be stating the facts instead of playing politics.

I tend to agree with Cahill in so far as Massachusetts cannot afford a $1.6 billion infrastructure project right now, no one can. But I had always assumed that federal funding was the governor’s way forward on this. How long is the Bay State’s contrition in regards to the Big Dig to last? The claim that federal tax payers were fleeced by Massachusetts are false, the lions share of the Big Dig was paid for and is continuing to be paid for by Bay State taxpayers alone.

We have an administration in Washington that is at the least paying lip service to mass transit. Cahill might want to change tack. Being honest with the voters is good, but telling the people on the South Coast you give up, without a fight, seems not a good way to win a primary. It behooves the Massachusetts delegation and the entire New England delegation to fight for more equitable funding for mass transit in upcoming federal transportation bills. Each state has transit plans that desperately need building, and each state is in an economic quagmire. The economic impact of a fully functioning mass transit system has to be the way forward for the region. Now is not the time to declare that all hope is lost. 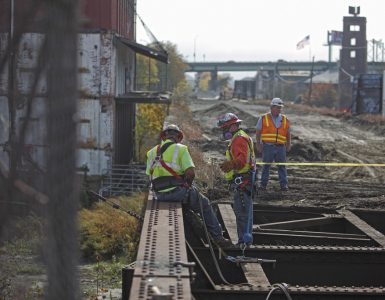