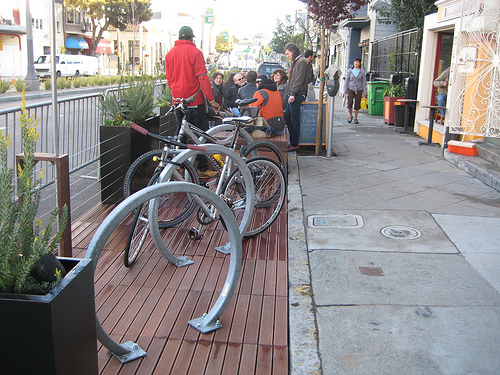 On Divisadero, the city has taken two parking spaces from the street and created space for bike racks, planters, and cafe tables.

“This is all about taking the narrative of the 25 percent of our land mass that [is] streets, and begin to take a little bit of that back and open that up for the community and create a framework where there is a stronger community connection, a stronger sense of place and a better community environment as well,” said [San Francisco Mayor Gavin] Newsom.

Of course I see this and immediately start thinking of where this would work in Providence. Atwells Avenue leaps to mind.

Really, there is barely any street parking on Atwells, every damn restaurant has their own valet parking reserved spaces side by each lined all the way down the avenue. The restaurants should team up on parking. Make 3 or 4 valet loading zones up and down the avenue. One would be able to park at any valet zone, and pick their car at any other zone. The valets would be connected by radio and be able to retrieve the cars to where their driver’s end up.

This frees up dozens of street spaces which we could turn into parklets. Having these extensions of the sidewalk would then enable people to actually walk down Atwells. The way it is now, the sidewalk tables take up the whole damn sidewalk and you can’t walk down the street without landing in someone’s calamari.

When I was in Spain I saw many of these sidewalk extensions. A commenter on the StreetsBlog post remembers them from Spain as well and notes that they are on wheels to allow for removal for street cleaning. One mitigating factor for us would be having to remove and store them in the winter to allow for snow removal. Of course we could get around that by not making these temporary, but by actually extending the sidewalks into the street.

And Atwells is not the only area where this would be a welcome addition to the streetscape of course. I could see these on Thayer, Hope Village, Broad Street…

[Andres Power, Pavement to Parks project manager for the Planning Department said] “We’ve gotten calls from New York City, Portland, Boston, Seattle, and Washington DC inquiring about how we are making these happen.”

A number of people have been working on this for some time, I’ve been to a few charrettes and meetings, and the vision is pretty exciting, take a look at the videos and express what you think in the comments:...

The Mayor’s Office is asking residents to fill out a brief survey about their park usage: We will use this information as a basis for community meetings in the fall that will focus on merging the Parks Department...