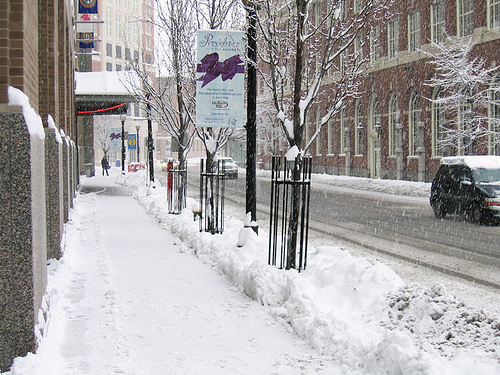 As I impatiently wait for the first real snowfall of the season, let’s take a minute to talk about removing snow from sidewalks, my favorite topic here on Greater City: Providence.

Back in February, the City Council updated the snow removal regulations, I was somewhat non-plussed by their action. My issues with the update were two; the DPW was given the authority to write citations, then immediately said they did not have the manpower to do so (the Police who originally had all the power here have been saying pretty much the same for years now), and the amount of time to remove the snow was increased from 4 hours after sunrise after the end of the storm to 8 hours.

As I outlined in the post in February, this extension to 8 hours could potentially create a situation where property owners are within the law not clearing their sidewalks for up to 24 hours. Were the roads not even attempted to be cleared for 24-hours, the citizens would rise en masse and burn down City Hall. And as I always say, at some point, every motorist leaves their car and becomes a pedestrian. So why have regulations that are so lax on snow removal when pedestrians are effected, but call out the National Guard if we have to to clear the roads?

In Cambridge, MA, a city with an online tool for reporting unclear or icy sidewalks, they are clear about when snow and ice need to be removed.

City Ordinance requires property owners to remove snow from sidewalks next to their property or business within 12 hours of daytime snowfall and before 1:00 pm when it has fallen overnight. They must also remove or melt all ice within 6 hours of the time it forms.

We all have a shared responsibility for keeping our community safe and accessible during winter weather. For you, your neighbors, people with strollers or using wheelchairs, and the many people in Cambridge who walk, please do your part.

That 12 hour window seems excessively long to me, but the other part, the “remove or melt ice” bit is really the major problem in Providence. This week we’ve had two minor little dusters, the streets were barely impacted, but their was enough snow to make the sidewalks slick in some areas, however, I saw no evidence of anyone treating the sidewalks. This is a condition that repeats all winter. Just enough snow to make the sidewalks slick, but not enough where anyone bothers to clear it. And of course, we have absolutely no one doing enforcement because they have all begged off that they don’t have the manpower.

Cambridge also steps up to the plate and addresses the issue of the elderly or disabled who are unable to clear their own sidewalks:

If you are a homeowner on a low income and/or you are elderly or have a disability, you may qualify for the City’s Snow Exemption Program, in which case the City will shovel your sidewalk. To find out whether you are eligible, please call the Cambridge Council on Aging, 617.349.6220 (voice) or 617.349.6050 (TTY).

If you do not qualify for an exemption, the Council on Aging can provide you with a limited list of professional snow removal companies and a list of students who want to earn money by shoveling – you contact the student yourself and negotiate a price.

That’s what civilization looks like folks. A city that realizes it is located in a geographic area that has seen snow for millennia somehow manages to find itself unsurprised by this climatological situation and has created regulations and programs to deal with it.

We have a new Mayor, and largely new City Council, and importantly a new Public Safety Commissioner starting work in under two weeks. It can never be too soon for them to get to work ensuring that our city is navigable for all citizens all year long. The Public Safety Commissioner should work with the Mayor and the City Council to determine how to tackle the public safety threat which is snow and ice covered sidewalks. The answer cannot continue to be that it is the responsibility of a department who cries that they do not have enough manpower.

Regarding the weed ordinance and enforcement

WPRI reports on City Councilman Michael Correia’s proposal to fine homeowners for unruly weeds on their property. The ordinance would impose a $25 fine per day on homeowners who have weeds or grass on their...

Atwells Avenue over Route 95. Photo by Jef Nickerson ProJo reports that the City Council has made some updates to the sidewalk snow clearing regulations. Changes are: In addition to the Police, Department of Public...