Jef Nickerson
26 comments
You may remember a couple years ago I was all excited about the fake Cape Cod subway map by Transit Authority Figures. I know have a print of that map hanging in my home office.

Not being from Providence himself, Robert has been relying on maps and interviews and the Google Machine to create his routes and name his stops. He is looking for us locals to let him know if he got it right.

Check out the map, and leave your thoughts in the comments for Robert. But do remember, this is not a literal map of a system that is actually, or will actually, ever be built. This is a fantasy, though Robert does want it to make geographic sense and some sort of sense of how service would run.

You can also find info about the map on its Facebook page. 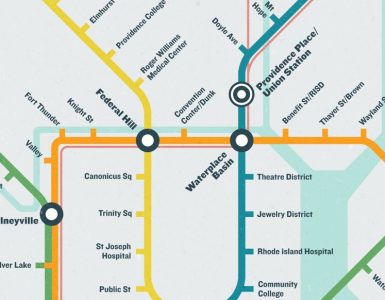 Improbable Providence Subway Map on sale now, get yours!