RIDOT is prepared to start work on the long awaited Washington Bridge Linear Park. The park is set to be built on remaining sections of the old Washington Bridge and will connect pedestrians and cyclists from Providence’s India Point Park to the East Bay Bike Path in East Providence.

As a result of work, the current passage over the bridge will be closed starting Monday, July 19th. RIDOT recommends recreational users of the East Bay Bike Path head to park in East Providence. Others are urged to use RIPTA to get to/from East Providence. RIDOT recommends that only “experienced cyclists” use the Henderson Bridge to cross the Seekonk River. Says a lot about RIDOT’s bikelanes on that bridge, don’t you think?

Full information about detours and closures can be found on RIDOT’s website.

The Rhode Island Department of Transportation (RIDOT) announced that it is starting the construction of a new linear park and bikeway over the old Washington Bridge between Providence and East Providence. Due to the construction, the Department must close the portion of the East Bay Bike Path that crosses the old Washington Bridge on Monday, July 9, 2012. This section of the bike path will be closed for approximately two years.

During the closure, experienced cyclists who commute to work by bike may use the Henderson Bridge to cross the Seekonk River. No formal bike path detour will be established.

Cyclists also may make use of RIPTA’s Rack ‘n Ride service, which is available on all regular buses. For no additional charge beyond the normal fare, cyclists can load their bikes on racks mounted on the front of RIPTA buses. RIPTA’s 33, 34 and 60 bus routes utilize I-195 and the Washington Bridge, while Buses 32, 35 and 78 provide service over the Henderson Bridge.

Maps showing local roads and bus routes will be posted at kiosks at each end of the closed bikeway. The maps and more information will be posted on RIDOT’s website at www.dot.ri.gov/bikeri.

“Given the popularity of the East Bay Bike Path, we know this closure will inconvenience some cyclists, especially those who bike to work,” RIDOT Director Michael P. Lewis said. “When construction is done, however, cyclists will have a vastly different experience riding into Providence. We eagerly await the reopening of this bridge as not only a first-class bikeway, but as a new park and destination for the city.”

Like the reconstruction of the India Point Park Pedestrian Bridge as part of the Iway project in 2008, this project will replace a sub-standard bridge for cyclists and pedestrians. The current crossing is so narrow that when cyclists approach one another from opposite directions, one must stop to let the other pass safely.

RIDOT also will reconstruct the Warren Avenue Ramp Bridge, which carries off-ramp traffic from I-195 East to Veterans Memorial Parkway (Exit 4) as part of this project. This ramp is scheduled to close in Fall 2012 and reopen in late Summer 2013.

Those with questions can contact RIDOT’s Customer Service office at 401-222-2450 weekdays from 7:30 a.m. to 4 p.m. Additional information will be available on RIDOT’s social media sites on Twitter and Facebook. 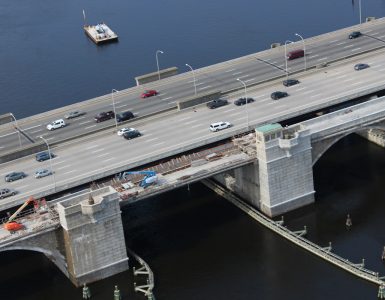 ProJo: ‘Linear park’ on Washington Bridge to open in June 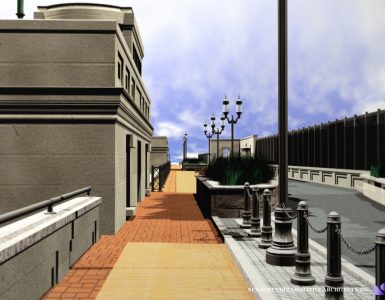 In the summer of 2012, the Department of Transportation closed the span — along with its narrow and harrowing path for bikers and walkers — to begin the $21.8-million “linear park” project. More than two years later...

Photo by Jef Nickerson Buried in a ProJo article about the new Iway ramp opening is this little nugget. In the coming weeks, the narrow catwalk on the [Washington] bridge, which connected India Point Park to the East...