East Avenue near the Pawtucket/Providence line.

I’m seeing a lot of bellyaching on social media about streets not being plowed yet. While, my street is showing signs of blacktop, I feel others pain, but. We got walloped with feet of snow drifting to amazing proportions. There are hundreds of thousands, probably millions of tons of snow that need to be removed from hundreds of miles of roads. This is not something that just happens in a day or two, or more.

What does annoy me, is snow removal done wrong. The Providence Bicycle and Pedestrian Advisory Commission (of which I am a member) has discussed with Providence EMA the problem of plows piling snow at the corners of blocks, which then makes it impossible for abutters to comply with snow removal regulations. And while like I said, we’re dealing with a monumental amount of snow, that really has few places to go, I’m seeing a lot of signs around the few parts of the city that I’ve been able to reach this weekend, signs that this continues to happen.

While the photo above is from Pawtucket, not Providence, it illustrates the problem well. My friend who took the photo asked the workers who were dumping the snow if the abutter here would receive a fine and was told: ‘if they talked to city hall they wouldn’t get a fine.’

Well, that is nice for the pocketbook of the abutter (though, ‘talk to City Hall,’ is a rather vague directive), it sucks for all the people who now have to walk in East Avenue because the sidewalk will be closed for weeks. 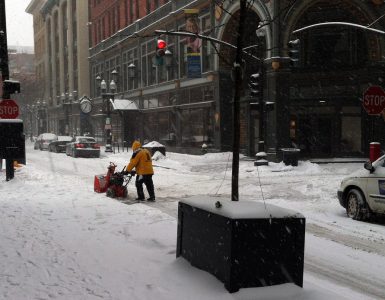