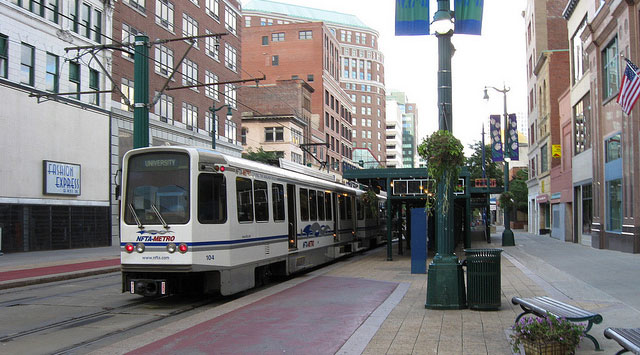 The Buffalo Niagara Medical Campus is spawning a housing boom along the Metro Rail line, as developers look to provide lofts and apartments for some of the 17,500 workers expected to be employed there.

Note their take on parking:

The new downtown cluster will provide enough parking for patients and visitors, according to Medical Campus President Matthew K. Enstice. But because the campus would rather spend its resources on medical facilities than parking garages, planners are encouraging the big new influx of employees to use public transportation.

“This is how you force culture change,” Enstice said. “We’re actually doing it.”

Plans call for bicycle racks placed at strategic locations, rental-car checkouts for employees, and an interconnected and walkable campus that will encourage thousands of people to live in the city near Metro Rail.

The plan “has to work” because there is no alternative, Enstice said. There is no room to park 17,500 cars on the 170-acre Medical Campus.

Also, read Stephen Miller’s take on how Providence needs to be taking heed of what Buffalo is doing:

You can have a vibrant small city, or you can have cheap, ample parking in and around downtown. You cannot have both, for the simple reason that parking takes up a lot of space that would otherwise be used by people doing economically productive things. Buffalo seems to have learned this lesson. Providence, meanwhile, is drowning in downtown parking as the metro area’s economy stagnates.

The program has worked for connected developers and savvy rehabbers, and has generally been a boon to the construction and architecture professions in the perpetually soft St. Louis real estate market. But after 15 years of success stories, Republican state legislators, who have long wanted to curtail the program, are moving ahead with a plan to cap the credit at $50 million annually, or about one-third of the amount issued in a typical year.

The program has done more than just save buildings. It has helped developers chart a course forward for St. Louis’ most distinctive districts and neighborhoods, long after the industries that created them disappeared. After decades of population loss, St. Louis finally began to regain its footing by tapping into one of its greatest strengths — its architectural history. But decades of mismanaged housing and development policy, and the same industrial shifts seen throughout the Midwest, left the city with historic building stock in desperate need of investment. Shoe warehouses downtown had been empty for years. Four-family flats in south St. Louis had outlived their market appeal. Closed schools faced an uncertain future as population decline guaranteed declining enrollments.

The Atlantic Cities: Gay Marriage and the Power of Cities to Change the Country

“Same-sex couples, and gay and lesbian people have gravitated to cities because there’s sort of safety in numbers, especially when it was much more frightening and dangerous to be out in a smaller community or a rural place,” says Marc Solomon, the national campaign director for the advocacy coalition Freedom to Marry. “Gay and lesbian people developed political power in cities, and they also showed everybody who lives in these cities that they’re going about their lives like everyone else.”

Cities are by definition heterogeneous places where there’s space for people to live varying lifestyles, so it makes sense that ideas at the forefront of civil rights movements would gain their earliest momentum there.

The Onion*: Report: It Pretty Incredible That Americans Entrusted With Driving Cars

Citing that a majority of Americans are irresponsible, easily distracted people who have little regard for other human beings, a new Department of Transportation report revealed Wednesday that it’s “actually kind of crazy” that U.S. citizens are allowed to drive automobiles.

*Yes, I know what The Onion is.