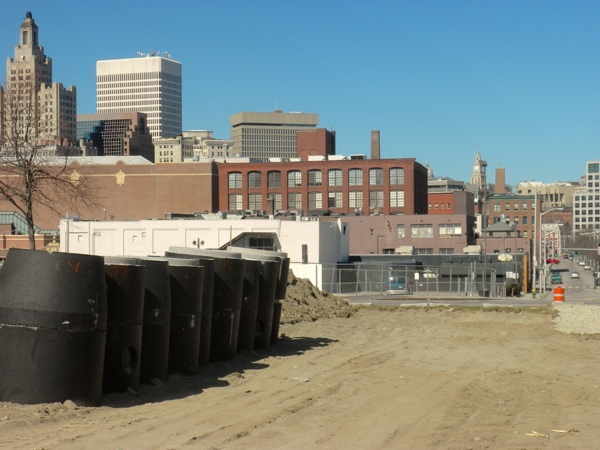 [alert type=”warning”]Jewelry District resident Lewis Dana sent us some photos and a bit of snarky commentary to go with them. Enjoy.[/alert]

I don’t know much about building a new street, either. …

Based on this shot of the continuation of Friendship St., early on you dig large holes, drop in these storm sewer pipes and cover them up with dirt. If all goes well, the sanitary lines go in at the same time. Let everything settle for a year or so.

Then you come back, dig more trenches for water, gas and electric services, back fill them and pave everything over.

Then some wise guy asks, what about telephone and cable? So you send in new teams of workers who barricade the streets, jackhammer trenches through the new macadam, install cable and phone, and patch everything back up.

If you’re being fastidious, you make a smooth job of it. Judging by the bomb cratered condition of Chestnut Street, into which someone sawed a fiberoptic trench about 7 years ago, that is a faint hope. Traces of that havoc remain to this day all along Chestnut, which is not on the Mayor’s 40-million dollar street repair map.

When the dust settles, mostly on everything in our apartment, is it too much to hope that the Grafitti Patrol will stop by and remove the tags with which the contractors have embellished every sidewalk in the neighborhood?

According to a tweet by Congressman Cicilline, the groundbreaking for the streetgrid rebuild is happening now.