Temporary traffic changes coming, maybe they should be permanent

The City is instituting some traffic changes for the days following Christmas due to expected high levels of pedestrian and vehicle traffic in the area of the Convention Center and Providence Place:

Vehicles approaching from the I-95 highway ramps will continue east on Memorial Boulevard and be directed to turn left onto Exchange Street, left onto Finance Way, and right onto Francis Street. Vehicles approaching from Finance Way will be directed to turn right onto Francis Street. Pedestrians and drivers should look for message boards and temporary signage.

The temporary traffic changes are planned to accommodate the increased downtown traffic expected for Providence Place Mall, Disney on Ice at the Dunkin Donuts Center, the Providence Rink at the Bank of America City Center, and performances at Providence Performing Arts Center and Trinity Repertory Company.

Thing is, there’s high levels of pedestrian traffic everyday. Is there anything in this traffic diversion which would be instructive for permanent traffic patterns?

I’ve often thought there should be an underpass at Memorial and Francis, but worry that just moves the problem of that intersection down to the already problematic Memorial and Exchange. It does give more room for the traffic to sort itself out from merging off the various highway ramps and entering the city streetgrid. Of course, an underpass is a not inexpensive intervention.

What do you think could be done, on the cheap or through more extreme engineering to improve the Francis/Memorial intersection? 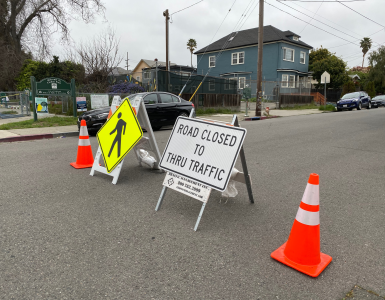 Mayor Jorge O. Elorza today announced Providence Slow Streets, a new effort to make it safer for residents to walk, run and ride bicycles while maintaining social distancing. Starting May 2, the City of Providence will... 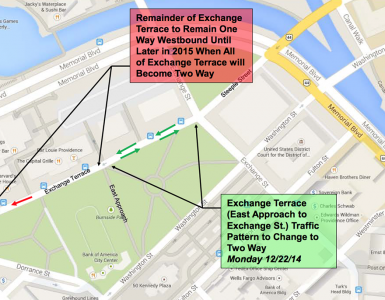 The City of Providence today announced upcoming changes to the traffic pattern on Exchange Terrace. Beginning Monday morning, December 22, Exchange Terrace (East Approach to Exchange Street) will be changed to...