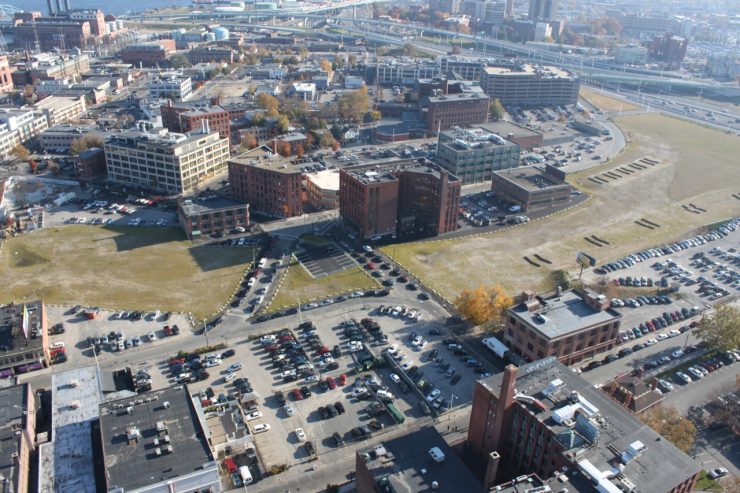 Press release from the Governor’s office:

PROVIDENCE, R.I. – Governor Gina Raimondo today announced six nominations for the I-195 Redevelopment Commission as a first step in advancing efforts to revitalize the vacant parcel in Providence. Raimondo is submitting the six nominees for consideration to the Rhode Island Senate for confirmation. “We’re focused on expanding opportunity and creating jobs for Rhode Island families, and the 195 land can be a key lever to attract businesses and boost economic growth,” Raimondo said. “We are grateful to Colin Kane and the other former commissioners for their public service to the people of Rhode Island, which helped lay the groundwork for our efforts. I want to thank Joe, Bob, Beppie, Melissa, Ed and Sandra for their commitment to this critical project, which has the potential to move our state forward and create real economic opportunities for Rhode Islanders.”

The Governor is submitting the following names to the State Senate for confirmation:

“We need to catalyze Rhode Island’s economy by capitalizing upon resources such as the developable land where I-195 once stood,” said Commerce Secretary nominee Stefan Pryor. “I am excited to work closely with the Commission on the build out of this land as an important part of our overall economic development effort.”

“The 195 Commission plays a vital role in our coordinated efforts to develop the land made available by the relocation of Interstate 195 in our capital city,” said Providence Mayor Jorge O. Elorza. “My administration looks forward to working closely with the commission’s members, Governor Raimondo, the Providence City Council and the General Assembly to make the most of this once-in-a-lifetime opportunity to grow our economy and build the New Providence.”

“The redevelopment of the former I-195 land is a major opportunity to help reinvigorate Rhode Island’s economy,” said President of the Senate M. Teresa Paiva Weed. “I am pleased that the Governor has made the I-195 Commission appointments a priority. I look forward to the advice and consent hearings in the Senate to learn about the vision of each of these nominees.”

“I am very supportive of the work of the I-195 Commission,” said Speaker Nicholas Mattiello. “This valuable land has the potential for great job growth and economic development activity, and we must work collaboratively to turn these opportunities into reality in the near future.”

“I am thankful for the confidence the Governor and her team have placed in me to chair this Commission,” said Joe Azrack. “I look forward to working in partnership with local businesses, institutions, government bodies and community groups, and with the other nominees, to carefully plan and guide the development of this project so that it contributes in a positive way to the economy and urban environment for the people of Providence.”

Joseph F. Azrack Joseph Azrack is the principal owner of Azrack & Company, an investment and advisory firm focused on the real estate industry. Azrack has over 30 years of real estate investment experience and was previously Managing Partner and Chairman of Apollo Global Management’s real estate business. Azrack holds an M.B.A. from Columbia University and a B.S. from Villanova University.

Robert C. Davis Robert Davis recently retired as a partner of the Boston law firm of Goulston & Storrs where he represented a wide range of clients in real estate projects over a 40 year career. He has represented colleges, schools, retailers, hotel operators and developers in all phases of real estate development. He holds a J.D. from Boston College Law School and an A.B. from Brown University.

Melissa Husband Melissa Husband serves at the Executive Director of Community Action Partnership of Providence. She has an M.P.A from the University of Rhode Island and a B.S. in Political Science from Roger Williams University.

Edwin J. Santos Edwin J. Santos is Chairman of the Board of Prospect CharterCARE, LLC, a new, for-profit healthcare joint venture in Rhode Island. He also serves on the boards of Washington Trust Bancorp and Providence Mutual Fire Insurance Company. Santos has 28 years of experience in the financial services industry, most recently as Group Executive Vice President and General Auditor for Citizens Financial Group. Santos received a B.S. from Bryant University.

Sandra Smith Sandra Smith brings experience in strategy consulting and business management from her work at the Boston Consulting Group in San Francisco, Charles Schwab, Catalyst Strategies and Recon Strategy. Smith holds an MBA from The Wharton School of Business and a BASC in Industrial Engineering with honors and a MASC of Industrial Engineering from the University of Toronto.

A meeting of the I-195 Redevelopment District Commission will be held at Rhode Island Commerce Corporation, 315 Iron Horse Way, Providence, Rhode Island, on MONDAY, APRIL 6, 2015, beginning at 5 P.M., for the following...