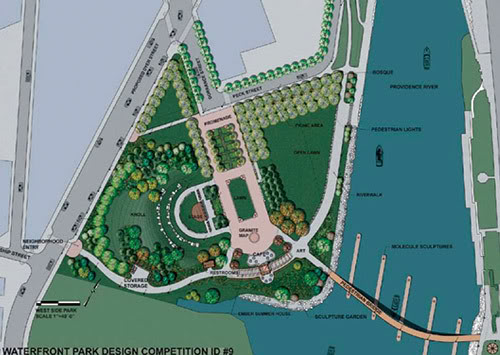 PROVIDENCE – Mayor David N. Cicilline today invited the public to learn more about the concept design for Providence’s new waterfront parks in a presentation by the firm Brown, Richardson, and Rowe, the winning team in the Waterfront Park Design Competition. The firm’s lead designer, Nina Brown, will give a presentation and the public is encouraged to provide feedback at the two upcoming meetings:

Tuesday, May 29 at 5:30 p.m.
The Providence Foundation Auditorium
30 Exchange Terrace

Mayor Cicilline kicked off the Waterfront Park Design Competition last fall by asking design teams to develop their vision of a spectacular waterfront park on two parcels of land that will become available when Interstate Route I-195 is relocated. He appointed an 11-member design selection committee consisting of community leaders to pick the winning concept among 16 submissions. Brown, Richardson and Rowe emerged as the winner.

The purpose of the meetings is to give the public an opportunity to help further refine the concept design for the two parks. The project must also meet contract schedules set forth by the Rhode Island Department of Transportation (RIDOT), which is building the parks as part of the highway relocation project.

A video presentation of the proposed park designs and an opportunity to submit comments electronically may also be found online. Written comments may also be sent to the following address before June 15, 2007:

The parks are scheduled to be constructed in 2011 and will be one of the last features to be completed as part of the highway relocation project.

PARK SERIES is Providence’s FREE Waterfront Music Series in the newly designed India Point Park! This event is part of the “Celebrate Providence!” Neighborhood Performing Arts Series and is presented...