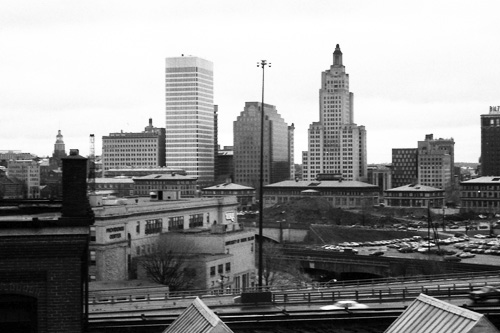 Bob Vennerbeck wrote to us to share his vintage 1993 sidewalk rant. Actually it’s more of a short story. Bob sent this to the Journal back on February 22, 1993; unfortunately the Journal never ran the piece, but we are.

Providence at it’s Best and Worst, or “Buddy, can you spare a shovel?”

Finally, a winter worth it’s salt! A fairly heavy snowfall being predicted, I arose early. The city is always so beautiful under its soft white blanket, all the rough edges concealed, the litter neatly tucked under. And so quiet, too! Even the snowplows and salt-trucks sound so far away, they might be on another world.

But it’s a Monday, so the sweet sound of spinning tires soon breaks my reverie. Oh, but for my youth in Foster-Gloucester-No-School, when I could have left my textbooks on the shelf, and earned a couple of dollars shoveling the neighbors out. Still, shovel I must – “it’s the law” – so I bundle up, and clear the sidewalk in front of my house, so the mailman won’t slip and fall, if he happens to come today.

I start early, as the walk to work today will be slow. The bus? – I thought of that, but I’m supposed to be at work pretty much the same time five days a week, not just alternate Wednesdays, noon to five, weather permitting.

At the top of the my street, I climb over the chest high pile of snow across the width of the sidewalk that the local gas station doesn’t think they’ll be needing. The man driving the jeep plowing out the station dumps another load in the street, and returns my wave. Poor man, his hands must be frozen, with his finger stuck in that position.

On I go, down Douglas Avenue, wishing I’d brought my crampons and ice axe – that first pile was merely a foothill. My heart leaped to see that our city workers, and their comrades with the state, were engaged in friendly competition. The snow ramparts blocking the sidewalks mounted ever higher, until at the Registry, you couldn’t even see over the top to find the steps down to Smith Street. Whoever walks to the Registry, anyway?

Downtown, our friendly parking merchants have cleared their lots and used our lovely new sidewalks to create handicapped accessible mini ski slopes at nearly every corner.

Meanwhile, on the Riverwalk side, there seems to be some difficulty deciding who is responsible for clearing a path for conventiongoers, sightseers, shoppers and the walking public. Do these walks belong to the City?, the State?, the Federal Park System?, or maybe the Narragansett Indians? I suppose I should relax – it’ll be spring soon, and it won’t be snowing quite so much.