Debra Booth: The other end of Wickenden Street

We’ve spent a lot of pixels here talking about the intersection between Route 195 and Wickenden Street on the west side of Fox Point. Debra Booth forwarded us a letter they sent to city and state officials addressing concerns about the other end of Wickenden, where the Gano Street ramps are:

From: Debra Booth and David Cosier, Residents of Fox Point
Date: 11 April 2010
RE: Concerns about the I-195 Project

My husband and I live in Fox Point, in a house we bought 3 years ago. I am a Designer and Teacher and my husband is an Art Director for film and television. We like our neighborhood and especially like the refurbished India Point Park and walking to the various shops along Wickenden Street. The new pedestrian bridge connecting our neighborhoods with the park is a great addition as well. We have invested in this neighborhood and the community. It was our understanding that the highway project was meant to reconnect the neighborhood to its shoreline and India Point Park. However, we have some real concerns about the highway project as it has evolved and its interface with our neighborhood. Providence has a great opportunity to provide leadership and innovation to working with urban neighborhoods. We certainly have the will and talent in this city to do it differently.

The areas of most concern for us cover the area on the map below coded in pink. 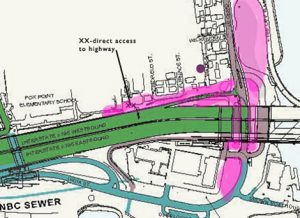 There are several important “quality of life” issues facing Fox Point, the city and DOT:

One of our concerns is the higher noise level from the highway. It has risen considerably over the last year. Some of my neighbors have suggested it’s the road surface is louder – I don’t know. While ours has always been decidedly an “urban” neighborhood, I was able to sit our back yard and read a book but it’s pretty unbearable at this point. Our neighbors and we feel forced to be shut-ins because of the roar of the highway. Opening windows this summer seems out the question. Is there a plan to deal with the noise – are there going to be noise barriers along the highway?

Gano Street and the on-ramp to I-195 are just around the corner from us. Last summer during the ramp reconstruction, crews pulled out old fencing and removed trees along the ramp – to install traffic barriers. The ramp area abuts the end of Wade Street. While the trees and brush removed were not the best of specimens, they were a partial visual buffer for us between the end our street and the on-ramp. Without any real attention what is left is just a chain link fence and the ramp. The view is pretty grim – cars speed up the ramp and in the foreground, a abandoned sofa, left over sewer pipe, an abandoned telephone pole and other construction debris, the side walk and bike path to the India Point Park are ripped up, broken glass, and unfinished work. This eyesore is a not encouraging to the neighborhood. It’s not a great welcome to Providence as an entrance point the India Point Park. This Gano Street entrance to the park is a heavily used access point – for cars, bicyclists and pedestrians. It is the access to the Hotel, the entrance to the Bike Bridge, Brown’s boathouse, and lower access to India Point Park itself. Joggers, folks walking their dogs, fight the traffic. There are no pedestrian crosswalks, the sidewalk and bike path are torn up, strewn with glass and have been for some time. What is the plan to complete this part of project? Does it include landscaping and screening for our street and the neighborhood from the on ramp – and some “green” noise barriers? 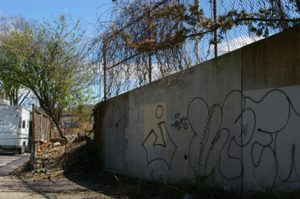 There was an effort last year to remove dead trees and brush along the highway but much of the debris was left after being cut, trees partially sawn through, parts of chain link fence were removed – opening directly onto the ramp. The clean up efforts were abandoned like the ramp area near Gano – leaving the area with less of a visual barrier and less of a noise barrier to the highway and inviting blight – the graffiti artists moved in quickly.

Closer to the Park and Vartan Gregorian Elementary School. 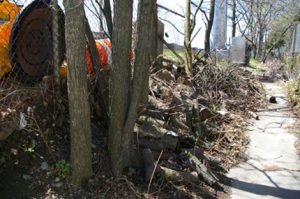 Perhaps the most immediate and serious disregard for the neighborhood is a little further up. There are places along this perimeter where there is literally nothing between the neighborhood and the highway. As I took these photos, I could walk easily along a much-used path to the park straight onto the highway. This is obviously a major safety concern – there are children and pets playing in the park which have direct access to this path. It is literally down an open short flight of stairs at the back of the park to the highway. Shouldn’t something be done about this before a major tragedy happens? I am sure that most parents of children playing in the park have no idea how vulnerable their children or pets are. 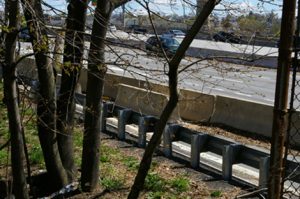 We are very concerned with the ongoing oversights and lack of regard and safety for the residents of our neighborhood. We do live in a construction zone – and have been living here for a few years now. I admit to a lot of frustration with the lack of concern, the noise, the poor air quality caused by the I-195 project and the lack of follow-thru. At the same time, I also know this is an opportunity for Providence. There are great and innovative solutions to much of this – if it is given the attention it deserves. There are so-called eco-walls that can provide noise barriers and improve air quality – which clean the air and at the same time keep children, pets and adults safe and improve the neighborhood. The message of the project as it stands now is to get the highway in – that the residents are really not of consequence – that the complaints will just go away. The residents deserve more than we are getting now. No doubt there are solutions – I have always been impressed by the innovation that these issues can produce for a community – especially in a city like Providence which has native talents – experts at Brown and RISD and the talent of the country’s best landscape architects and urban planners. Just for the record, I nor my husband work at either of these institutions – so I am not looking for business. As a resident I think we can and must do better than what we have done so far. 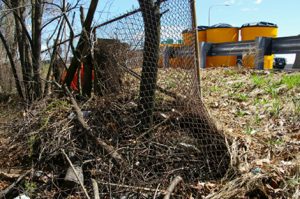 Only this morning I read about a botantist, Patrick Blanc, who has developed vertical green walls – for situations very similar to our own. I’ve heard about “The Living Wall” which won the Green Toronto Award in 2008. There are solutions and no doubt other ideas that could address our needs as well. We are committed urban residents and like living here – please help make Fox Point a live-able neighborhood. We are worth it!

We look forward to hearing more about these issues and the city’s plans for our neighborhood We will be attending the Fox Point Community meeting at the end of the month. If there is anything else we can do to – please let us know. 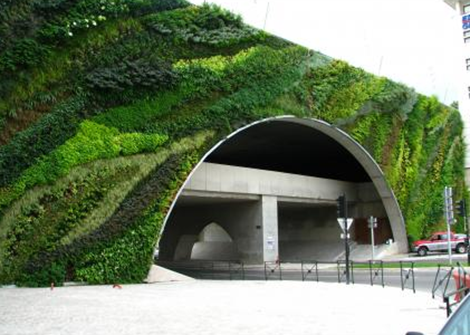