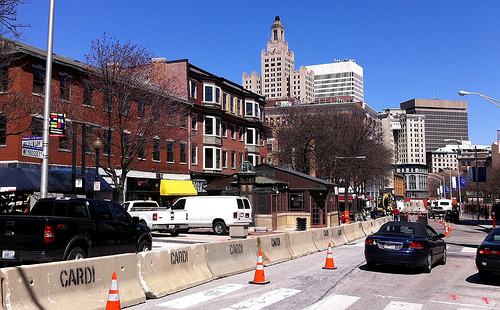 Phase 2 of the “Downtown Providence Traffic Circulation Improvements” have begun in earnest. This morning a lane was dropped on Weybosset Street, Mathewson Street is closed between Weybosset and Chapel (through June), and a worker was out with a giant machine cutting hacking away at the sidewalks. 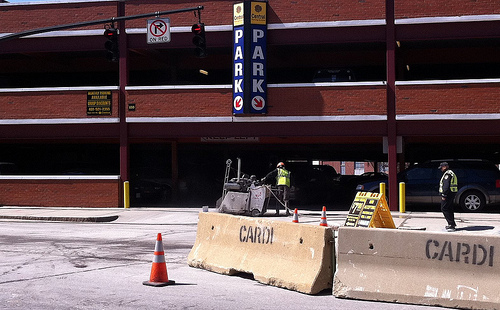 You might be thinking, “Phase 2, did I miss Phase 1.” Well, you might of, I did. The Circulator Project (not to be confused with the Core Connector Study) is to make more Downtown streets two-way, to make traffic flow better and the city more predictable to navigate. Phase one was the conversion of Washington Street to two-way traffic and happened some time early in the last decade.

Phase 2 will see Empire Street, from Fountain to Weybosset and Weybosset Street from Empire to Dorrance become two-way streets. A sign of this project has been around for years where the lights at Washington and Empire are set up for two-way Empire even though Empire has continued to be one-way.

One reason Phase 2 has been held up so long is for planning for how Weybosset would be re-built outside of PPAC, the area that is now being referred to as “PPAC Square.” A drop-off lane will now be constructed outside PPAC. The tower of the comfort station will be restored and moved into a new median on Weybosset Street (the bulk of the comfort station was determined to not be historic as it was a later addtion and will be demolished).

Later Phase(s) of the Circulator project will include rebuilding LaSalle and Emmett Squares, making Sabin Street, Dorrance Street (in front of the Biltmore), and Exchange Terrace two-way, rebuilding Fountain Street, and possible enhancements to Kennedy Plaza.

Below is the city’s notification to abutters regarding the project (including a rendering a the decorative lightposts to be installed in “PPAC Square”):

Construction will begin in April 2011 on the Downtown Providence Traffic Circulation Improvements – Phase 2 and will continue with substantial completion by December 2011. The contractor for this work is Cardi Corporation. Construction will occur typically from Monday through Friday, 7AM to 3PM. Road paving operations will be on weekday evenings to minimize disturbance to traffic and businesses.

We are aware of the inconvenience caused by our activity and apologize in advance. Rest assured that we will do everything possible to minimize the impact of the construction to you and your business.

If there are any questions regarding construction work, please contact Mr. Craig Hochman of the Providence Department of Public Works at 401-467-7950 Ext. 515.

Thank you in advance for your understanding and cooperation.